Ash and Silver - Review by SE 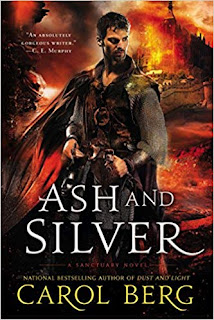 Ash and Silver by Carol Berg
S.E. rating: 4 of 5 stars

Carol Berg is an accomplished fantasy writer, usually employing the first-person narrative with protagonists empowered with taboo-sorcery (i.e., Romy (An Illusion of Thieves in Chimera); Seyonne (Transformation in the Books of the Rai-kirah); Seri (Son of Avonar in The Bridge of D'Arnath); Lucian de Remeni here in Ash and Silver (sequel to Dust and Light in the Sanctuary Duet).

And these follow the Lighthouse Duet (Flesh and Spirit and Breath and Bone).

I read this sequel without reading the first book (or prior duet), but it read fine. I got to learn about the hero as he relearned about his past/powers. As the book blurb states, this book is about Lucian de Remeni. Isolation is another of Berg's go-to themes, with her protagonists being torn from their communities either enslaved, outcasted, or exiled. Here, Lucian has undergone a sort of self-imposed amnesia from the onset. His journey transforms him into a completely new individual.

Lucian's powers drew me to this series. He is a sorcerer with "bents" toward portraiture and history. He can portray the truth others (i.e., powerful royalty) wish to conceal, and can read/work the land/architecture too. Lucian is the perfect sleuth, but now he has learned how to fight like a warrior too.

How cool is it that historians and artists can be the most powerful magicians? If they can read the truth, they also can manipulate it. Want to dig up dirt on an enemy? Have an artist portray the enemy's worst dirt. Want to save yourself from judgment? Have an artist erase those nasty details from a portrait already made.


"Creating memory patterns was art. Words, objects, faces, facts--these were lines, curves, dimensions; thick or narrow, sturdy or delicate, certainty or suggestion. Sensation and emotion were colors, blended and shaded, given depth or left vague. The memory itself was a composition, and if the artist was able to bring his bent to its creation, it would take the aspect of truth."--Lucian de Remeni

Lucian is embroiled in massively epic conflicts between blue & silver-hued Danae (elf-like fairies of another realm that also for the land), between the Danae and humans, humans and other humans (with a vacancy on the empire's thrown, three princes battle for power, and some have been banished from earth), sects of the Order and Registry of Pureblood sorcerers. The 478 pages can hardly contain all the madness. Somehow, Berg manages to continuously ramp up the intensity and connect all the myriad threads. All conflict involves Lucian somehow.

What do you seek in a good book? The same that Lucian seeks on his adventures: a good story. "What else could a historian desire?" Berg makes being an artist & historian fun and dangerous., and she makes it fun to live vicariously through a like-minded sorcerer.

The amount of pain, sleeplessness, and torture that Lucian experiences pushes the bounds of believability at times and the sheer epicness of the conflicts -- coupled with the rate of betrayals & insights-- is mind-boggling. It had me engaged, but this could easily have been expanded into several novels. I plan to be a good historian and read Dust and Light next.


'..and how pervasive is the righteous anger of a portrait artist easily seduced to murder?" Lucian de Remeni


View all my reviews
Posted by SE Lindberg at 3:47 PM