I am honored to have Bob Milne of Beauty in Ruins Book reviews dissect Helen's Daimones.  Like weird fiction, then you should follow his blog & reviews.

"The Dyscrasia novels by S.E. Lindberg are deep, intricate reads that hearken back to the pulp days of Lovecraft, Howard, and others.

...What this chapter did for me was breathe real life (no pun intended) into Lord Lysis. He becomes a sympathetic character here, especially in his encounter with a tragic young woman (buried alive so many years ago), the ghosts of her children (hung for their corruption), and their army of dolls (crazy, dangerous dolls). He's still a monster, a fearfully powerful being, but he's also a personality here. As for Doctor Grave, he was already a full-fledged character, but he becomes a little more chilling here as new layers of mystery leave us to question his deeper motives.
...Helen's Daimones is weird fantasy, weirdly told, for weird readers. As the strongest of the three stories to date, it makes for a great introduction to Lindberg's world, and creates more than enough interest for a fourth entry.
Posted by SE Lindberg at 8:37 AM Links to this post


Wanted to capture two rewarding instances for writing reviews. Apart from the occasional "helpful" review click on Amazon.com (after ~7yrs, I have 281 helpful marks on 109 book reviews;  ~50,000 reviewer ranking), there is little feedback from other customers. 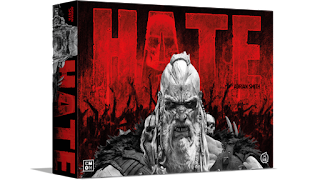 Being an avid board gamer too, I was combing board game geek for an update on CMON's HATE game.  CMON and artist Adrian Smith have been in league together for some time.  Adrian Smith's graphic novels are being adapted into a boardgame, and I was looking for an update when lo-and-behold the chat room in Board Game Geek had my review of Vol.#1 posted to explain the context of the series (link).  Of course, my credit is identified as "Amazon Reviewer" which is ok. I was thrilled my review was useful and shared.

Expect a Kickstarter from CMON on HATE in a year or so. 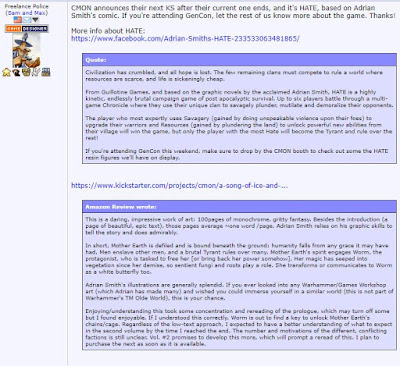 2) We Are All Legends 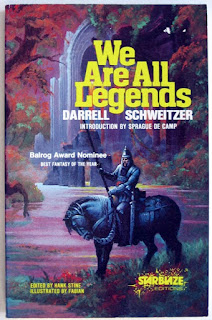 That experience reminded me of a Facebook interaction several years ago.  A few of us Sword & Sorcery aficionados were discussing Darrell Schweitzer's  We Are All Legends (click for review: it's a collection of weird adventure by a master of weird fiction).

I lamented in a comment that only two of us had reviewed the book at the time (2008, 2012).  Then Caleb chimed in to say he was the other! I did not know Caleb, and the Facebook group was rather obscure (I believe it was one dedicated to Karl Wagner). In any event, it was a rewarding moment to stumble across another reviewer! In 2015, another reviewer stepped up for this book.  Really, We Are All Legends deserves to be read (and reviewed) more. 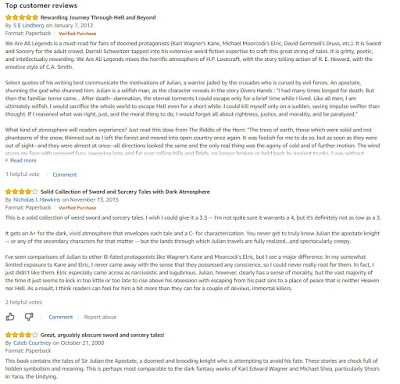 Posted by SE Lindberg at 12:45 PM Links to this post

Email ThisBlogThis!Share to TwitterShare to FacebookShare to Pinterest
Labels: Good_Vibes_from_reviews

Power of the Sapphire Wand - Review by SE

The Power of the Sapphire Wand by Erika M Szabo
My rating: 5 of 5 stars

The Power of the Sapphire Wand continues the Creepy Hollow Adventures (the first being Three Ghosts in a Black Pumpkin: Creepy Hollow Adventures 1). It is crafted by the duo of Erika M Szabo, an established children's book author, and Joe Bonadonna, established in the Heroic Fantasy and Science Fiction arena. I know Bonadonna's work more than Szabo's; even though he has written more adult fiction, he has always expressed empathy and interest in children's perspectives (partly inspired by a direct connection to the 1958 Our Lady of the Angels School fire).

The paperback The Power of the Sapphire Wand clocks in at 244 pages, but it reads fast with wide spacing and large font. Jack and Nikki are key young protagonists who come of age ~13yrs old, learning new Gifts and making friends as they adventure in "Creepy Hollow" (a parallel world, Narnia-esque). They leave earth to save family members and fantastical creatures from Evila, a cruel witch. All the fantasy creatures are derived from common myths/stories, and the "Creepy" world is appropriately fantastical yet very accessible.

Humor abounds, with three stooge-like goons (Poo, Goo, and Boo) and Dragon Rocks (a.k.a. scat, or poop) playing essential roles. Plenty of righteous motivations drive Jack and Nikki: they protect the weak and confront evil directly. It is fun to see them grow. Some of the bad guys are just too bad to save, but others are open to redemption.

In short, Szabo and Bonadonna make a great pair. Their Creepy Hollow Adventures is a perfect starting point for young children making the leap from "kids books" to "novels."


View all my reviews
Posted by SE Lindberg at 10:47 AM Links to this post

Paperbacks - Until Nov 28th! Via Goodreads

Click here to learn more, or here to Enter Giveaway
US, CA, and GB

Click here for the eBook Giveaway (that's the entire list; easiest to ctrl+F "Helen" to find it). 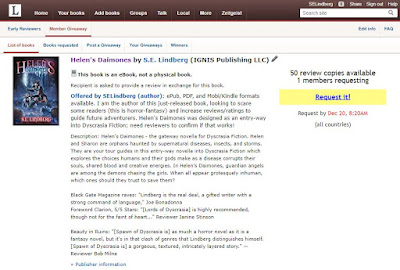 Posted by SE Lindberg at 12:26 PM Links to this post

Entertaining, Genre-Bending, Satirical Madness:
Hell Hounds is a mashup of genres: Fantasy, Satirical Horror, Historical Fiction, and some Mystery Noir thrown in. Imagine a parallel universe to our reality on earth where the dead “un-live” for an eternity. If they die there, they feel the pain but then reawaken…. sometimes creatively transformed by The Undertaker (i.e., perhaps he’ll remove your testicles and use them handles on a zipper that wraps around your neck!). Goofy, satirical puns laden the map (Paris is Perish, the Eiffel Tower now the Awful Tower, etc.]. Want to read fresh fiction, read Andrew P. Weston’s Daemon Grim series (check out the guide below to begin).

Daemon Grim is the Reaper, Satan’s personal enforcer and chief bounty hunter. He commands the titular Hell Hounds, a band of agents (Nimrod – the rebellious, biblical king, Charlotte Corday – murderess of Marat, Yamato Takeru—a ninjutsu master of the Yamato dynasty, and more ). They ultimately all serve Satan, Father of Lies, who needs them to control Hell from the conniving dead and meddling angels; but Satan is also punishing his servants for their sins, so no one is on good terms.

Underlying tension spans many groups: Satan, Grim & his Hell Hounds, the duo Frederic Chopin and Nikola Telsa (an ingenious duo learning to control the physics & time in Hell), an insane Angel stripped of his Wings (Grislington), and seven angelic Sibitti who are auditing the souls in Hell. At first the combinations of intentions and conflict is downright farcical. Eventually several themes converge, usually about Grim. The last 20% is a blast of a climax which clarifies the chaos. Along the way, Mr. Weston will occasionally slip into dosing out exposition-through-dialogue, which didn’t bother me. Usually this occurs at times the reader will desire a boost in clarity about the abstract conflicts.

There are two primary games occurring. One is the continuing, cat-and-mouse battle between Grim and Chopin/Tesla, who love to leave scavenger-hunt notes at crime scenes. The second is Grim vs. the angels (and perhaps himself &/or Satan); there is a mystery in this series which is slowly being revealed: who “was” Grim before becoming Satan’s strongest champion?

Where to Start:
Hell Hounds is wacky and fun, but is not the beginning. The Heroes in Hell is primarily a series of anthologies; this novel focuses on Grim but has story arcs connected to HIH. Given the breadth of abstract interactions, I recommend initial readers begin with either:
1) Doctors in Hell (HIH #18): Daemon Grim is introduced in this collection, and even though it is #18 in the series, it is a perfect entryway for HIH newcomers.
2) Or…. Hell Bound (Grim novel #1): Daemon Grim’s first novel, occurring chronologically after Doctors, but before Hell Hounds.
3) Or for those who’ve done that, note Grim also appears in Pirates in Hell (“Pieces of Hate”)

View all my reviews
Posted by SE Lindberg at 11:07 AM Links to this post 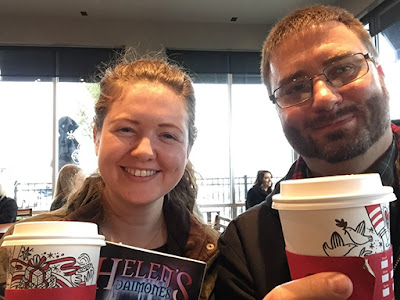 
A few years ago, Jessica read The Time Traveler's Wife; she enjoyed it, but it was emotionally draining and she has not read fiction since. Eh gad! She has read lots of scientific literature on the engineering of industrial cleaning & santization, so she was primed for some good horror.

So, she was lured into the weird-fiction world with Helen's Daimones.  The Book for Beverage Program was key for this therapy (in short: buy a Dyscrasia Ficiton book of any format, and I'll treat you to a beverage). She chose coffee as her reward. Starbuck's came through, and the Holiday Spice Flat White was a good stand-in for the desired Pumpkin Spice. A freshly toasted crumpet or authentic scone would have been better yet, but hey we are not in England.

Thanks Jessica for your support.

Posted by SE Lindberg at 5:34 PM Links to this post

Email ThisBlogThis!Share to TwitterShare to FacebookShare to Pinterest
Labels: Book For Beverage Program

As per the previous post my trip to Norman OK for IASR, in between sessions I also continued discussing artistic endeavors with Professor John Scamehorn (Professor by day, and Producer by night). His steampunk horror short film Pax Masculina is making the rounds at film festivals. He's got a few horror movies in queue! Check out his IMDB profile.

Not sure if he has the CGI budget to tackle all the ghosts in Helen's Daimones, but one day it would be fun to expand Dyscrasia Fiction into a medium beyond audio books & paper.


Posted by SE Lindberg at 3:54 PM Links to this post

The last several years I head to Norman Oklahoma to attend the annual Institute for Applied Surfactant Research (IASR) meeting. What else is in Norman? My friend and author Tom Barczak, a fellow Perseid Press contributor with a poetic, dark style.  Barczak is an artist & architect who has a beautiful ability to capture angelic warfare with drawing pencil and keyboard.

Before the seminars started, I squeezed in another Starbuck's meeting.  This time I got a glimpse into Tom's sketches for his Hands of the Dragon book...and  was allowed to share a bit with you (see below)!  And what out! I think creepy surfactant assemblies are inspiring him!


The notes read: "A suitable sacrifice .... A cenotaph of blood..."
[click to expand image]

Eh gad, is that a micelle?

Of course my mind is focused on surfactants, and what do I see has Tom's notebook? A micelle? That's a spherical assembly of soap molecules, a key technology for detergency. Well he claims his sketch is his visualization of an epic assembly of people as they execute a divine ritual.  Anyway, I adore micelle formations, having illustrated them for Prof. Steven Abbott's Surfactant Science: Principles and Practice ... with the app Practical Surfactants (available for free).  But they also creepy me out (surfactants can form some scary "living" structures, such as myelins).

So the moral of this story is:

Obey your muse... and be wary of self-assembled structures!

Posted by SE Lindberg at 9:15 AM Links to this post