I just backed a the UNTAMED - Print Hardcover Kickstarter campaign  (started Feb-17...last until March something). A hardcover rendition of Stranger Comic's Untamed series. Very grim, artsy, Sword & Sorcery. The book will retail at $29.99, but as a Kickstarter Special, you can get it signed and shipped for $25.

The first one was made into a Motion Graphic, on Youtube: ~11min (see embedded video). Watch it!

Email ThisBlogThis!Share to TwitterShare to FacebookShare to Pinterest
Labels: Kickstarter

Perseid Press has a great portfolio of Historical Fantasy and Fantasy Fiction including The Heroes In Hell Series and Sacred Band of Stepsons.  Below is the announcement for their most recent offering, a new take on the legendary missing Ninth Legion (available now):

The IX, by Andrew Weston

If you like your science fiction fast paced and gritty, full of realistic action and dark humor in the face of overwhelming odds, then The IX is definitely the epic for you.

Fans of Julian May’s “Saga of the Pliocene Exiles,” Robert Heinlein’s “Have Space Suit, Will Travel”, and Jerry Pournelle's “Janissaries Series” will love this tale. It combines the divergent elements of the past, present, and future, and blends them together into a slick and stylish package that will leave you breathless and hungry for more.

The Must Read Science Fiction Adventure of 2015. Sometimes, death is only the beginning of the adventure...

Arden, home to a culture that has existed for thousands of years and which spans dozens of worlds. Regardless, their sophistication cannot prevent calamity at the hands of an unstoppable nemesis. Known only as the Horde, this enemy has proven relentless. They have not only stripped the outer colonies bare, but now threaten the existence of the entire Ardenese way of life.

Realizing there is nothing they can do to prevent the inevitable march toward extinction, the Ardenese governing body comes to a drastic decision. They gather together at their capital city, Rhomane, and place their remaining genetic heritage in a vast underground ark, in the care of an advanced AI construct called the Architect. Its mission? To use Rhomane’s dwindling reserves and safeguard their race by reaching out across time and space toward those who might be in a position to help reseed a devastated world at some time in the future.

Soldiers from varying eras and vastly different backgrounds find themselves snatched away from Earth at the moment of their passing and transported to the far side of the galaxy. Thinking they have been granted a reprieve, their relief turns to horror when they discover they face a stark ultimatum:
Fight or die! Despite a host of seemingly insurmountable obstacles, this group of misfits manages to turn the tide against a relentless foe, only to discover the true cost of victory might exact a price they are unwilling to pay.

Andrew P Weston is a military and police veteran from the UK who now lives on the beautiful Greek island of Kos with his wife, Annette, and their growing family of rescue cats. A criminal law and astronomy graduate, he is a member of the British Science Fiction Association and British Fantasy Society, and is a contracted writer of both fiction and poetry for several publishing houses and a growing number of well established magazines.

In his spare time, Andrew assists NASA on one of their research projects, and amazingly, still finds the time to submit regular educational articles for Amazing Stories and Astronaut.com. When not writing, Andrew enjoys holding his breath, being told what to do by his wife, and drinking Earl Grey Tea whilst dressed as Captain Jean Luc Picard. Make it so...

Posted by SE Lindberg at 9:35 AM Links to this post

Griots: A Sword and Soul Anthology - Review by S.E.

Griots: A Sword and Soul Anthology is an aptly named milestone in speculative fiction. Named after African storytellers who relied on the oral tradition (griots), this anthology marks the initial growth of the sub-genre “Sword & Soul.” Charles R. Saunders is credited with starting the sub-genre with his Imaro tale (Imaro Series). Imaro broke the mold of adventure fantasy with Saunders being the primary champion. With Griots: A Sword and Soul Anthology, Milton J. Davis leads a troop of authors to expand the front. Saunders contributes the introduction for this as well as the capping tale. An excerpt reveals the Saunders’s motivation and the original scope of Sword & Soul:


Robert E. Howard and his contemporaries were products of their time. Racism, in the form of white supremacy, was an integral part of the popular culture of the early decades of the twentieth century, and as such it pervaded pulp fiction. As a product of a later time during which the tenets of racism came under vigorous challenge, my enjoyment of fiction from past decades was often compromised by the racial attitudes I encountered in my reading. On some occasions, I simply let it slide. On others, I wrestled with resentment. Then I discovered a way to resolve my dilemma.

Interest in African history and culture surged during the 1960s, and at the same time I was reading sword-and-sorcery and fantasy fiction, I was also absorbing heretofore-unknown information about a continent that was not “dark” as its detractors made it out to be. I realized that this non-stereotypical Africa of history and legend was just as valid a setting for fantasy stories as was the ancient and medieval Europe that served as the common default setting for everything from Conan to Lord of the Rings. A character came into my head then: Imaro, a black man who could stand alongside mythical warrior-heroes like Beowulf and Hercules, as well as fictional creations such as Conan and Kull.


There are 14 varied contributions. A large portion deal with the coming-of-age of the protagonist. Some suffer from too-powerful heroes or overly ambitious scopes (i.e. a few did not feel stand alone, reading as non-identified excerpts or poorly contained plots). My favorites tales were:

The Belly of The Crocodile by Minister Faust, a vulgar, first-person perspective of a fantastic tale.

The General’s Daughter by Anthony Nana Kawmu: a trip to the Underworld, a warrior goes to save a loved one from death.

The Queen, The Demon, and The Mercenary Ronald Jones’s battling, demonic armies = engrossing sorcery and battle.

The Three-Faced One: Charles R. Saunders’s Imaro tale demonstrates the best storytelling, from its tapping into African history/myth coupled with excellent pacing and gripping style.

More Sword & Soul: Milton J. Davis leads MVMedia which is churning out more Griots (i.e Griots: Sisters of the Spear) and a host of other Sword & Soul media, from Young Adult novels to Video Games! Check out their offerings at the (MVMedia Website and Facebook page for Sword & Soul.

Quibbles: I read the Kindle version which had two outages: (1) Scene breaks were not marked; hence, paragraphs from different scenes that should have had an additional return/space or a marker, instead ran together; this leads to repeated confusion in several stories; (2) There are credits for many artists, but there is no art in the Kindle or even alternate text.

Recommendation: New to Sword & Soul? I recommend reading either version of Charles R. Saunders's Imaro. Then it would be a coin toss continue with either (a) Imaro:2 (The Quest for Cush) or (b) branching out to find like-minded authors with very different styles with Griots: A Sword and Soul Anthology.

View all my reviews
Posted by SE Lindberg at 7:19 PM Links to this post 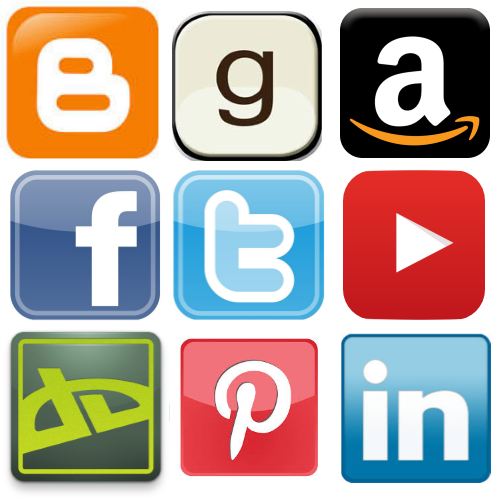 Finally got a Twitter feed established for S.E.Lindberg & Dyscrasia Fiction.  I hope all these social media sites are sufficient!