A cherub sits atop the earth’s atmosphere, ushering in the new sun with a trumpet call!  Happy new year! 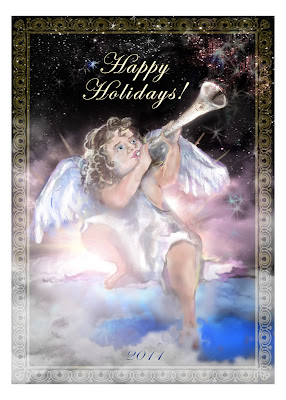 Another year, another card; historic Holidays Cards (from 1998 on) are display here!

Style: Wanted to learn how to paint with PhotoShop (as per artist/microscopist Vince Kamp and ImagineFX workflows (link); Credits: I acknowledge awesome critiques from my wife and daughter; their input was tremendous.  It helps to produce art with a few crafty, artistic folks around (who are not afraid to tell you how to improve).

Here was the process of generating this year’s card:

1) Conception: The initial goal was to incorporate bears into a Holiday theme.  This originated as tribute to our family vacation to the Shenandoah park (having encountered ~5 bears in 3 separate instances).  The only conceivable way of including a bear was as a toy…so the vision of an angel cradling a teddy bear while nestled in pillows emerged…with a morning sun encroaching!  Between sessions at the recent Society of Rheology convention in Cleveland, I  doodled the first composition of a cherub holding a teddy bear. 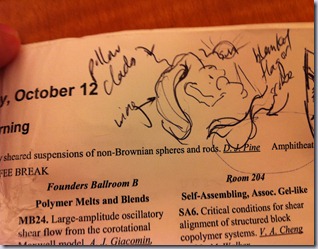 2) Sketches and Story: When I got home, I used pencil and paper to draw a few cherubs.  The story emerging now was a set of three angels, one awake and hailing the new sun to the annoyance of the other two slumbering cherubs.

3) Digitization: Next, These sketches were scanned into Photoshop with some pictures of my local West Chester skyline.  Each was granted a dedicated layer and “blocked in” separately with a mask. Wanted to target a Renaissance mood, and experimented with gaudy frames (later eliminated). 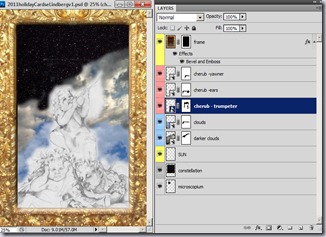 During SoR we had visited the Cleveland History Museum and its Planetarium; there I learned about the coolest constellation ever, which I tried to incorporate: Microscopium.  This idea was eliminated since the constellation is usually in the South not the East and I required the sun rising behind the angels. 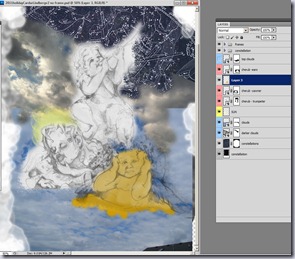 4) Painting: I used a Wacom Bamboo tablet (I can’t rationalize ordering a Cintiq until I learn some more!).  So I began painting over my sketch as if it were a blank coloring book entry.  Using the swatch panel as an artist’s palette works well.  Still need to learn how to use Brush Presets, since I was constantly iterating between masking, painting, dodging/burning/ etc.  Notice how two angels were discarded--one was enough. 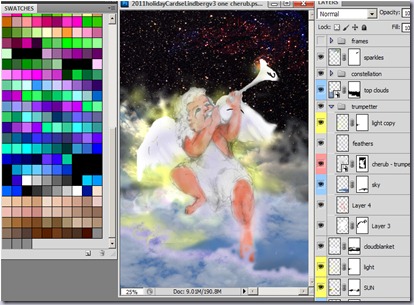 5) Adjustment layers: Finally, I added a few adjustment layers to tone down the saturation (i.e. the left image below looked like a neon bar sign) and warmify/cool selected masked regions (to put a translucent brilliance into the clouds); oh yeah, a few carefully placed lens flares helped with the sun’s brilliance. Erin instructed me to turn the eyes from green to blue to match the sky; Heidi had me remove some “mystical smoke” that was blowing from the trumpet…which I thought was cool until I saw her point that it made the angel look like a pipe-smoking crack baby.  Cripes!  A near miss! 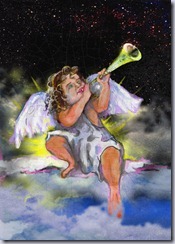 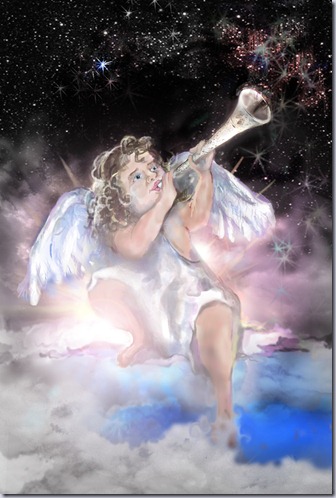 6) Final steps! A decorative border and text are added in Illustrator (then tweaked in PS), and woo-hoo! we arrive at the final card (at top)!  Need to order prints from mpix.com !
Posted by SE Lindberg at 6:37 PM Links to this post

Review- Lords of Dyscrasia is Creepy and Fantastic

A Halloween treat for me!  The first customer review has been posted for Lords of Dyscrasia !  It is an informative, succinct post that builds on the ForeWord magazine review (5/5 stars) by describing motivations of the key characters:

4 out of 5 Stars
Creepy in a fantastic kind of way!,

This review is from: Lords of Dyscrasia (Kindle Edition)
The book revolves around the characters: Doctor Grave, Crypia, Endenken, and Dey. Endenken seeks revenge, Doctor Grave dreams of restoring what was lost, Crypia wants to live, and Dey is running away from his past. In a world of disease, monsters, and danger, will the passions and desires that drive them be enough to help them survive?A very well done book by S.E. Lindberg! From the beginning, we are treated to vivid descriptions of the carnage and ruin created by the disease, dyscrasia. Don't expect this author to pull his punches, he's not afraid to make readers squirm! The plot is engaging and fast-paced, once you get through all the exposition. While I don't feel all that sympathetic to some of the characters, they stood out in their own way and are not strictly "good" or "evil".I should point out that I wouldn't recommend this book to any young readers. Some of the scenes can be pretty brutal. Also, one thing I have an issue with is that the beginning can be a bit confusing, especially when coupled with the book's intricate language. Lindberg switches viewpoints a lot so it's easy to lose track of what's happening sometimes. However, once you get used to the author's style, the book becomes even more enjoyable and you'll finish it in no time!Pro: flowery and vivid descriptions, complex characters, unique setting Con: Somewhat confusing in the beginning
Posted by SE Lindberg at 8:58 AM Links to this post