To promote the Audiobooks of Dyscrasia Fiction  I'm hosting paperback "Giveaways" to reviewers on Goodreads.com.  Winners also get ePub/Kindle copies and Audible.com credits for complimentary audiobooks.

Related, the release of Heroika: Dragon Eaters coincided in May 2015, in which my story Legacy of the Great Dragon appears...and a Giveaway is also ongoing for that!Goodreads Book Giveaway:

Giveaway ends July 21, 2015.
See the giveaway details at Goodreads.
Enter Giveaway
Posted by SE Lindberg at 8:23 AM Links to this post

Elak - A “Must Read” for Leiber. Lovecraft, Smith, and Howard fans

Kuttner’s Elak and Raynor - A “Must Read” for Leiber, Lovecraft, Smith, and Howard fans

Context: The Father of Sword & Sorcery Robert E. Howard dies 1936, and the Weird Tales market needs weird adventures. By 1938, Henry Kuttner stepped up, in part, with his Elak and Raynor characters. These have been reprinted in Elak of Atlantis. Kuttner is later known to have produced many tales, especially with his wife C.L. Moore, who partnered with Kuttner after these stories were published. Kuttner also corresponded with contemporary masters H.P. Lovecraft and Clark Ashton Smith, and he did an admirable job of mixing “Cthulu-esque mythos” with “Conan-esque” adventure (and even Hyperborean lands, like Atlantis with Picts).

Elak is no Clonan: In the 1960’s many authors tried to extend Howard’s legacy with Clonans. Kothar, Brak, and Thongor were shallow clones of the original (i.e. they were all loners, all wielded broadswords, hailed from a northern cold climate, hated magic, wore loincloths, etc.). Elak was designed to follow the original Conan, yet was different. Elak had a companion (Lycon), used a rapier, wore clothes, and had a royal history which he shrugged off. Elak’s tales are firmly “Sword & Sorcery” but he is no clonan.

Kuttner’s Formula:
(1) Have a companion (Elak has the drunk Lycon; Raynor has the loyal Nubian Eblik)
(2) Rescue a new lady (worth dying for, but not worth having in the next episode)
(3) Have 2 antagonists (one wizard and one swordsman) with separate story lines that intersect only with the hero’s journey
(4) Seamlessly pay homage to Lovecraft, Howard, and Smith, in a unique way.

Trippy Cyclopean Pulp Style and amoral Hero: The style is uber-paced (expected of pulp style adventure), which rockets forward so fast it almost derails. Even in these short stories, expect multiple, separately-motivated antagonists-- this double density approach makes the pace ridiculously fast. The first story “Thunder in the Dawn” Northern European inspired fantasy, and the druid Dalan is more powerful and has a mission to save Atlantis; contrasting, Elak, steals a wife, runs away from his royal duties, and is less powerful than the Druid. I felt myself more attached to Dalan, who thankfully appears in a later episode ("Dragon Moon").

A strength of Kuttner is his poetic sidebars echoing Clark Ashton Smith’s cadence (reflecting on Kuttner’s other work like The Book of Iod: Ten Tales of the Mythos, he had the ability to echo Lord Dunsany’s style too). Below is an example from “Thunder in the Dawn”:

"Elak stood up, bracing himself. He stared in sheer astonishment.

It was no earthly landscape which he saw. Obscure color-patterns, shifting and dancing strangely, weaved in the cool air all about him…Yet the weird pattern was not only on the pale clay-colored plain on which he stood, but rather all about him in the air. He stood alone in a fantastic weave of somber shadows.

Colorless shadows, dancing. Or were they colorless? He did not know, nor was he ever to know, the color of the grotesque weavings that laced him in a web of magic, for while mind told him that he saw colors, his eyes denied it."


Partners and humor: Elak’s drunken side-kick Lycon was comedic and as loyal as a fellow thief could be. It seems very conceivable that the 1970’s duo Fafhrd and the Gray Mouser of Lankhmar by Fritz Leiber were inspired by this. Elak and Lycon are murderous thieves and their choices make them hard to like: In the second story, “Spawn of Dagon” (yes that’s a shout-out to Lovecraft), they murder innocent guards, accept payment from suspicious evil doers to kill another wizard without question. So they routinely steal and kill without qualm, and when they are trying to save a maiden from distress it usually is for money. Yet the journey is solidly entertaining. A great mash-up of horror and adventure.

View all my reviews
Posted by SE Lindberg at 8:22 AM Links to this post

Foreword Reviews (J. G. Stinson 2011) raves: 5/5 stars "[Lords of Dyscrasia]... highly recommended, though not for the faint of heart... The pace is nearly breathless... makes the majority of current popular fantasy fiction read like recipes..." 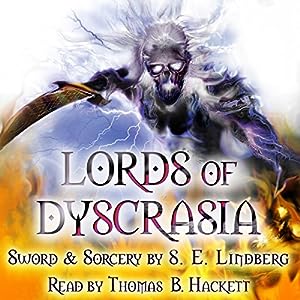 Joe Bonadonna, Black Gate contributor & Author, 2015  raves:
"Lindberg is the real deal, a gifted writer with a strong command of language, and a soaring talent that stretches beyond the verbal: he illustrates his novel with his own wild and weird and excellent drawings. If you like action-packed dark fantasy with bizarre settings, an original premise and clever twist, then add this one to your Must Read List."

Posted by SE Lindberg at 5:00 PM Links to this post

Email ThisBlogThis!Share to TwitterShare to FacebookShare to Pinterest
Labels: Audible, Lords of Dyscrasia

All are welcome to join the Goodreads Sword and Sorcery group read the below topics in July and August 2015:

1) TANITH LEE folder : With Tanith Lee's recent passing and coincidental re-release of The Birthgrave: Birthgrave Trilogy: Book One, it is timely to delve into her weird fantasy.
2) SOLOMON KANE folder : Robert E. Howard (Father of the Sword & Sorcery genre) had more heroes than Conan of course. Let us talk of his The Savage Tales of Solomon Kane, and even the comic book and movie adaptions.

Posted by SE Lindberg at 4:35 PM Links to this post

“It simply isn’t an adventure worth telling if there aren’t any dragons.” – J.R.R. Tolkien

and learn the Art of Dragon Killing!

About the editor: Best selling author Janet E. Morris began writing in 1976 and has since published more than 30 novels, many co-authored with her husband Chris Morris or others. She has contributed short fiction to the shared universe fantasy series Thieves World, in which she created the Sacred Band of Stepsons, a mythical unit of ancient fighters modeled on the Sacred Band of Thebes. She created, orchestrated, and edited the Bangsian fantasy series Heroes in Hell, writing stories for the series as well as co-writing the related novel, The Little Helliad, with Chris Morris.

Posted by SE Lindberg at 7:41 AM Links to this post

Email ThisBlogThis!Share to TwitterShare to FacebookShare to Pinterest
Labels: Heroika

That's me in Newcastle, UK on a business trip, recently. While roaming the city, I stumbled across this moving monument to those who died fighting for justice and peace -- namely WWI and WWII. It was timely to see St. George kill a dragon, since the release of Heroika: Dragon Eaters' release  coincided with Memorial Day USA (May 25th 2015).  It is now available in ePub and Paperback from most online retailers.

My short story Legacy of the Great Dragon appears in HEROIKA -- DRAGON EATERS  along with sixteen more tales of dragon hunting/consumption, each with a varied milieu & style (from an awesome set of authors). Each took a perspective from a different century and local, so the recipe's are varied.

Posted by SE Lindberg at 1:00 AM Links to this post

Email ThisBlogThis!Share to TwitterShare to FacebookShare to Pinterest
Labels: Heroika

Kothar of the Magic Sword by Gardner F. Fox
S.E. rating: 2 of 5 stars

The title and the author’s foreword to this second Kothar book (the first being Kothar: Barbarian Swordsman of five Kothar Series) promise conflict from two sources: (1) the magic sword “Frostfire” (cursed so that Kothar “can never be otherwise wealthy”, and (2) revenge from the sorceress Red Lori, whom Kothar contributed in arresting within a silver gibbet (in book-1 presumably). However, Frostfire’s powers are rarely demonstrated (arguably never shown), nor is its propensity to loose wealth featured. Worse, Red Lori, who at least does appear in the book, is presented so inconsistently that readers can only wonder: what is going? who cares?

Clonan Expectations: Gardner Fox’s Kothar is a clonan: a “clone” of REH’s 1930’s barbarian “Conan.” Kothar has all the expected traits: a wanderer with a broadsword, hails from northern cold climate (Cumberia), disdains civilization, and bears his open, uber-masculine muscular chest… and let us not forget… demonstrates unnecessary misogyny (I don’t remember REH being this over the top). Other notable clonans emerging ~1970 include John Jakes‘s Brak the Barbarian and Lin Carter’s Thongor and the Wizard of Lemuria. Like Carter’s Thongor, Fox’s Kothar reads like poor fan fiction more than it does a unique tribute to the Sword & Sorcery genre. “Brak” is not ground-breaking fiction, but it may be the best of these three.

Like the others, a decent cover artist (Jeff Jones) promises emotive adventure. Four interior drawings (E. Robbins) is a nice addition, but the illustrations are not connected with the stories: for example, whereas the words indicate a wild bear is an enemy, the drawing shows a werewolf-like man wielding swords; later the text has Kothar fighting nomadic Mongols but the art has him fighting a dragon.

Monty Python and Fake Wrestling: I did not expect much, but was still disappointed. Plenty seeds-of-adventure are never developed, and plenty more scenes are silly: for example, Kothar dresses up like a sheep as bait for an airborne creature, and later he fights a bunch of naked, weaponless priests with his cat-like instinct, puffed out chest, and wrestling moves right of the World Wrestling Federation TV show (seriously, he does one of those moves in which he jumps & kicks both feet into the chest of a combatant…. obviously a go-to move when you have a magical weapon, are 2x the size of any normal man, and your opponent is a disarmed druid). Kothar of the Magic Sword was published in 1969, but subsequent history seemed destined to amplify the self-parody present. There is a scene that may have inspired the infamous “I’m not dead yet” encounter in the 1975 classic “Monty Python and the Holy Grail” (a bad guy has all four limbs torn removed, manages to live, and is engaged in conversation with “What? Not dead yet?”).

Red Lori: Enemies have no longevity or depth, and conflict is ever shifting. That said, I was particular excited about the Red Lori character, who had lots of potential. She is introduced in the foreword as a remote antagonist; imprisoned with limited powers, she manages to haunt Kothar. Her involvement was quite effective for 66% of this until….

She tricks Kothar into freeing her, ostensibly to save a maiden from being possessed (from a female demon that Kothar also seems to like). Kothar frees Red Lori nonchalantly without qualm (even though she has threatened him and tried to kill him via assassins). In fact, she instantly becomes a companion with little conflict. Kothar even saves her from danger and goes on a quest with her. It is a mess of faux-romance and faux-drama.


"Red Lori had forgotten her hate for [Kothar], and her determination for revenge, or so it seemed…She was a learned sorceress, she had come close to destroying mighty Kazazael, long ago. It was by [Kothar’s] efforts that she had been overcome.

Yet now she seemed to have forgotten her desire for revenge.

Kothar could not understand it."

Readers will not understand this change either. With the sudden shift, the only brewing potential in the story was utterly ruined.

More Fox:
Interested in Gardner F. Fox? Fans of Fox often recommend his Kyrik hero over Kothar.
View all my reviews
Posted by SE Lindberg at 12:48 PM Links to this post