Nifft the Lean by Michael Shea
S.E.Lindberg's rating: 4 of 5 stars

More appropriately named “Nifft the Tour Guide” since the four short stories comprising this do not develop Nifft’s character or his motivations. His presence is a mere instrument for the author (or the author’s fictional historian, Shag Marigold) to describe entertaining adventures worthy of recording.

Shae offers a strange, effective mix: non-scary, detailed, weird narratives (this is weird fantasy to be sure, but a “fun” version). Readers should expect engaging, detail-packed guided tours through hell and otherworlds. There are battles and adventures, but one should NOT expect being terrified (it is not weird horror like Lovecraft) and do NOT expect heroic battles (Nifft is not Howard’s Conan).

Shae’s strength is his meticulous detail of strange worlds which can only be conveyed by using examples:


“Those waters teemed, Banar. They glowed, patchily, with a rotten orange light, and in those swirls of light you could see them by the score: little bug-faced ectoplasms that lifted wet, blind eyes against the gloom, and twiddled their feelers imploringly; and others like tattered snakes of leper’s-flash with single human eyes and lamprey mouths. And there were bigger things too, much bigger, which swam oily curves through the light-blotched soup. One of these lifted a complete human head from the waters on a neck like a polyp’s stalk. It drooled and worked its mouth furiously, but could only babble at us. All these things feared the raft, but you could feel the boil and squirm of their thousands, right through your feet. The heavy logs of the raft seemed as taut and ticklish as a drumskin to the movement of the dead below.” --- From the first story: Come Then Mortal--We Will Seek Her Soul

“Some grottoes, for example, were densely carpeted with victims whose faces alone retained their human form. The rest of their bodies—everted and structurally transformed—now radiated from each face’s perimeter in wormy coronas. They resembled giant sea-anemones. The souls within those faces still—all too eloquently—lived …

And there were others of our species who lay in nude clusters resembling the snarls of kelp which a northern sea will disgorge on the sand in storm season. Their legs and hips merged with central, fleshy stalks, while their arms and upper-bodies endlessly and intricately writhed and interlaced. These were the very image of promiscuous lust, but the multiple voice they raised made a hospital groan, a sick-house dirge of bitter weariness. Crablike giants, hugely genitaled like human hermaphrodites, scuttled over them with proprietary briskness—pausing, probing, nibbling everywhere.” --- From the third story: Fishing of the Demon Sea

View all my reviews
Posted by SE Lindberg at 10:15 AM Links to this post

ImagineFX is the premiere digital magazine for today's artists.  It takes a holistic approach toward creating art.  I was particularly attracted to its emphasis on combining traditional drawing/inking approaches with digital rendering (coloring).  ImagineFX is available by PDF and hardcopy magazine; they are known for providing digital content (images, textures, Photoshop brushes) on a DVD including videos of the artists creating their work (now being posted on their YouTube Channel).  The videos are not replacements for the magazine write-ups, and often do not have audio.  However, watching the enhanced time-lapse process in "real-time" is insightful for those learning how to compose a classic fantasy scene. 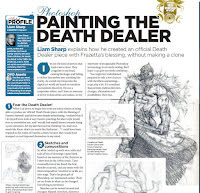 Posted by SE Lindberg at 6:34 PM Links to this post

The Coming of the Horseclans by Franklin Robert Adams
S.E.Lindberg rating: 4 of 5 stars; View all his reviews

Fans of military fantasy with Sword & Sorcery traits will enjoy this (David Gemmell and Karl Wagner were better writers, but fans of theirs would enjoy this opener of the Horseclans series). The premise is ostensibly apocalyptic sci-fi, but really it appears as a gritty epic fantasy (i.e. no bullets or lasers or machines, just barbarian hordes, swords and some mutant-telepathy and immortality mixed in).

Cover artist Ken Kelly did a superb job, and arguably was more successful than the author in presenting/creating the world. Truthfully, it is worth tracking these out of print books down just for the cover art.  It is an interesting opening book, and since I am compelled to read the next book (Swords of the Horesclans) I rate it 4/5.

Swords of the Horseclans by Franklin Robert Adams
S.E.Lindberg rating: 3 of 5 stars ; View all his reviews

Epic in scope. A little less gritty than the the first in the series (Coming of the Horseclans), which featured gore, rape, and torture. Instead, the comical plight of Demetrios offers some levity. The logistics of battle are articulated nicely. The dialogue style is unnatural, however; essentially the dialogue is just more narrative from the author rather than genuine conversation. The primary battle is largely anticlimactic since we are constantly made aware that the antagonist army is uninspired and ill-prepared.

I admit to being enthralled by Ken Kelly's cover art. Compared to the text, the cover art disproportionally brings to life the post-apocalyptic North America "Horseclan" world. I am compelled to read the next in the series, though I am expecting less than after reading the first book.

Revenge of the Horseclans by Robert Martin Adams
S.E.Lindberg rating: 4 of 5 stars; View all his reviews

Inappropriately named “Revenge” (this nice read had little to do with Horseclans seeking revenge) this introduces the Kindred leader Bili as he assumes power of his clan after his ruling father’s death (the “Bili the Ax” title was reserved for installment#10 but would have made more sense here); again Ken Kelly’s covers seem to represent the book disproportionally… since at least it focuses on Bili and his Axe. This epic fantasy is plagued with some cheesy dialogue, but it is forgivable since the story develops nicely.

This installment continues to develop the Horseclan world at a nice pace while reinforcing the role of telepathy, Kindred Law, and the conflict between: (a) barbarian hordes, vs. (b) sensationalized-greek-religiosity vs. (c) lurking science-derived-warlocks. Bili is set up to have key roles under the Undying god Milo’s leadership.

A Cat of Silvery Hue by Robert Adams
S.E. Lindberg rating: 3 of 5 stars

This fourth installment continues Robert Adams' dense narrative. The antagonists are portrayed as "Christians turned crazed homosexuals bent on human sacrifice." Bili and Milo continue the quenching of the rebellion (which is still left unresolved...in mid-battle no less).

Disappointingly, the main characters consume the spotlight but do not perform much with their powers other than mindspeak (telepathy). A Cat of Silvery Hue really is about the average Geros, who rises to the occasion to perform heroic deeds that hundreds of nearby veteran warriors fail to address. Geros exhibits more "character" than any of the main characters, and the title is named in honor of his exploits. However, he is a marginal character whose presence is sparse.

I am left with the same feeling I get when I order a greasy hamburger to-go from a fast food joint, leave the drive though, and discover that I was given a chicken sandwich by mistake. I'll curse the restaurant, claim I will never come back, but will anyway after some time.

+ Geros is developed nicely
+ The fight scenes deliver as expected.
+ The Horseclans is very much like fast food.

- The main characters did not develop or perform exciting roles
- All the bad guys are blundering idiots with the exception of Drehkos
- Occasional erotica scenes are out-of-place and laughable
- The Horseclans is very much like fast food.


View all my reviews
Posted by SE Lindberg at 10:45 AM Links to this post