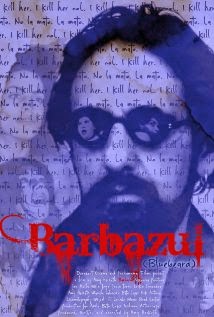 Recommended for (1) mature audiences who (2) enjoy literary, paced horror (with healthy doses of disturbing erotica):  This graphic tale aims to disturb in elegant fashion. Note firstly that the script is an adaption of a classic fairy tale La Barbe Bleue (Bluebeard, 1697) by Charles Perrault. Most folks in 2014 in the USA will not recognize his name, but he authored many famous tales translated to the movie screen (i.e.,Little Red Riding Hood, Cinderella, Puss in Boots, and The Sleeping Beauty). Here, Bluebeard tells the story of a wealthy aristocrat who kills his many fiancees.

Beautiful Serial Killing: Bluebeard appropriately plays like the Sweeney Todd play. Viewers watch as victim after victim are taken to Barbazul’s remote plantation to suffer an unsuspecting death. The pacing is measured; the music and strange situations carry the film. The beautiful remote setting and filming was reminiscent of the cinematography of the Coen Brother’s Fargo (1996) and Stanley Kubrick’s rendition of Stephen King’s The Shining (1980).  About ~10 minutes could have been shaved off the first third without lessening anything, so impatient viewers may lose interest.

The acting, writing, casting, and filming were all well done. The music score did overwhelm voices at times (at least on the version I streamed); however, despite the writing being good enough to listen to, the occasional dimmed conversation didn't detract from the film.  For one, I was reading the subtitles anyway.  Also, the acting is clear enough that this could have been presented as a silent movie (keeping the wondrous soundtrack of course).
Each victim arguable has more character depth than the titular Barbazul. They all have some artistic bent (poor model, mature model, singer, writer, museum goer), which reinforces the artistic nature of the film. Each death is intimately, and vividly, captured at length.  Despite the cruel nature of the deaths, and the copious amounts of exposed flesh, the “blood and gore” was kept at minimal levels; in short, the murders are done tastefully. The beauty of each woman is torturously lost as viewers become voyeurs to fatal sex. Bizarre, really.

Barbazul: So, do you enjoy modelling?

Annabelle: I am enjoying the fact that I am still beautiful. I love taking photos, looking at my photos. It’s something that will last forever. It’s artistic as well.Using your body, knowing how to move, knowing yourself. To understand your own beauty is…not that easy…

Art Horror: The film crew at Pachamama Films have made a series of complex horror films, each being unapologetic about graphically killing naked women. Yet they aim to keep rooted in history or classic literary works, and they take their craft seriously. Somehow they present loads of erotic horror in a beautiful way; that is a stunning balancing act. I look forward to their film currently in production called "Olalla," which is based off of Robert Louis Stevenson’s story (Treasure Island, and The Strange Case of Dr Jekyll and Mr Hyde.) That tale originally featured an English soldier recovering from battle wounds when he falls in love with a woman who belongs to a mysterious vampiric family. Can’t wait to see the Pachamama adaptation of Olalla.

Email ThisBlogThis!Share to TwitterShare to FacebookShare to Pinterest
Labels: Movies, Reviews - by S.E.


Sword & Sorceress Adventure– Morgaine rivals Elric with her dragon blade
This reviews Gate of Ivrel, which I read as part of the The Morgaine Saga which was DAW’s 2000 omnibus of C.J. Cherryh Sword & Sorcery trilogy (1. Gate of Ivrel 1976; 2.Well of Shiuan 1978; 3. Fires of Azeroth 1979). There is a fourth book Exile's Gate written in 1988. Actually, this is my first C.J. Cherryh novel and I was impressed (Gate of Ivrel was her first published work, and it is quite good).

Morgaine is reminiscent of Michael Moorcock’s Elric, since she is a doomed hero, traveling through interstellar space with a dragon-cursed sword that sucks souls (Morgaine’s blade Changeling is almost kin to Elric’s Stormbringer). There are Sci-Fiction elements to this that are kept obscure enough that it reads as pure fantasy (everything scientific appears as magic).

Morgaine’s charge is to destroy alien Gates, which allow for travel between time and universes; for those who want to stay put, the “witchfires” of the Gates fuel sorcery and extended lives. We quickly learn that she was imprisoned hundreds of years before the start of the story as she lost an epic battle with the evil magician Thiye. He apparently still lives (via said sorcery):


"...Carcasses were found near [the Gate of Ivrel], things impossible, abortions of Thiye’s art, some almost formless and baneful to the touch, and others of forms so fantastical that none would imagine what aspect the living beast had had."


Strangely Thiye does not emerge for most of this novel. Instead there are compelling "new" threats from a host of others (some in relation to Vanye), and the book is full of magical clashes in which Changeling obliterates souls! It may be "her" saga, but book one introduces her through her male companion Vanye, an outcast bastard prince. The story arc for Book 1 belongs to him. Vanye becomes her servant after he releases her from a magical prison, and so the two enter an uneasy pairing. They make a good team, but trust comes slowly as Vanye enables Morgaine to confront those supporting the Gate:

"Morgaine was supremely beautiful …when he saw her in that hall, her pale head like a blaze of sun in that darkness, her slim form elegant in tgihio and bearing the dragon blade with the grace of one who could truly use it, an odd vision came to him: he saw like a fever-dream a nest of corruption with one gliding serpent among the scuttling lesser creatures—more evil than they, more deadly, and infinitely beautiful, reared up among hem and hypnotizing with basilisk eyes, death dreaming death and smiling.”


Great stuff. I expect the rest of the trilogy to flesh-out Morgaine’s character (otherwise it should be renamed Vanye’s saga). The ending was fine, but I was left questioning the direction a bit (I’ll hide that in a spoiler twistee on Goodreads.com (link).


View all my reviews
Posted by SE Lindberg at 6:35 PM Links to this post

YA Adventure: 'Coming of Age' of a 'Chick-in-Chainmail'

Sword Sisters is a tale of Aella, a snarky, special teenager who starts exploring her independence. She may not wear chain mail, but her attitude fits that of the stereotypical chick-in-chainmail (Aella resembles author Tara Cardinal in appearance, which happens to reflect that of red-haired warriors of the Sword & Sorcery genre: Agnes de Chastillon, Red Sonja, and Jirel of Joiry). Tara Cardinal is the key force behind a “Red Reaper” franchise, this novel Sword Sisters: A Red Reaper Novel serves a prequel to the Legend of the Red Reaper (video trailer link) movie which she directed, wrote, and acted as the major star. The movie has opened in select markets a month after the book was released (movie available via many streaming and online retailers April 2014.). Tara Cardinal is motivated to expand the Sword & Sorcery audience by making it more appealing for younger females, and she is succeeding.

This book was co-authored by Alex Bledsoe, who contributed to another Rogue Blades Entertainment work: Writing Fantasy Heroes. Rogue Blades Entertainment’s library (i.e., Rage of the Behemoth, and Return of the Sword) had focused on anthologies tailored for an adult audience, so this novel presents a slight departure into a new market (Young Adult, not-anthology). Having read the aforementioned RBE works, I would not recommend this to their historic audience, unless they happened to also identify with & enjoy YA fare.

This review combines 2 perspectives: (1) an adult male, dark fantasy reader (me), and (2) a young adult fantasy reader (my teenage daughter).
Old Man Perspective: Other than featuring a belligerent, young heroine, this book sticks to many of the tropes & clichés of any coming-of-age fantasy novel. Conflict is consistently deflated with adolescent humor, juvenile idioms, or Aella's giggles. There are hints of mature content that are never developed: the basis of Aella's powers stems from demons raping human females, however, explicit sex or sexual violence never presents itself. The prose could be considered `mature,' since copious cursing & cussing peppers the text (as a teenager learning the art of "adult" language would speak).

Young Adult Perspective: Since I was not the target audience, my teenage daughter was enlisted. She enjoyed it better. Her thoughts: "Aella, last of the Reapers (half-human and half-demon), is a witty, humorous, well-rounded character whom you can't help but love. Told from the first-person point of view, you really get to see Aella's character and motivation. Being a teenager myself, I defiantly enjoyed this. Plan on having time to sit down and read the whole book in one sitting, because once you pick it up it's hard to put down. I hope there's more to read in the future :)"

View all my reviews
Posted by SE Lindberg at 7:47 AM Links to this post

Top two thematic topics will continue for two months in the Sword & Sorcery group on Goodreads.com. Vote to steer the discussion! Write-in suggestions always welcome (enter in the "Your Choice" field).

New Releases: Let's focus on the future! Anything published since ~2010 is game. Hell: Any trip to the Underworld, be it Dante's Inferno, or something from the In Hell seriesHeroes in Hell... Obscure Works: Let's unearth some arcana! Last time this led a bunch of us to (re)discover Campbell's Ryre character. Sword and Sandal: With movies like Hercules and the 300 sequel, some may be in the mood for this. Sword and Planet: John Carter of Mars anyone? Graphic Novels & Comics: Slaine: Warrior's Dawn,The Savage Sword of Conan, Volume 1,Red Sonja #1, etc. Vintage Howard: We have yet to have a group read honoring REH, eh gad!Conan of Cimmeria, The Savage Tales of Solomon Kane, Sword Woman and Other Historical Adventures, etc...
comments and details · show results · invite friends

Posted by SE Lindberg at 1:41 AM Links to this post