"Another ZAA Instructor’s Seminar has come and gone. Mushinkan Dojo would like to thank Noble Sensei and all the Teaching Committee members for the great instruction in both how to perform techniques and how to teach.

I cannot say enough about the caliber and quality of everyone who attended. Our time on and off the mat strengthened our connections and friendships. As always everyone of us gave our attention and sacrificed time to make the seminar awesome.
Mushinkan Dojo also has the great pleasure of announcing that Seth Lindberg was promoted to Shodan this weekend. Mushinkan Dojo is thankful to Seth for his years of dedicated practice and help developing the Dojo.

[Thank you, Sensei, Mushinkan, and ZAA. I am very grateful for reaching this milestone. Years of training with local Mushinkan members and at many of the ZAA seminars developed me; the journey has just begun of course. Looking forward to growing more, helping others, and developing the dojo. I won't repeat my whole speech here, but will do so to Mushinkan members over Raymond's Pizza soon--my treat. 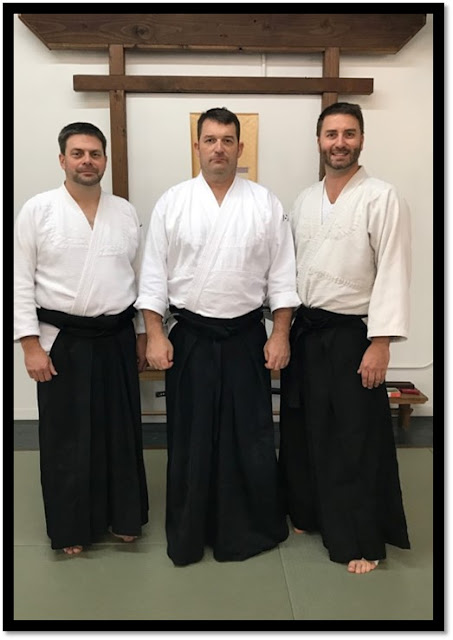 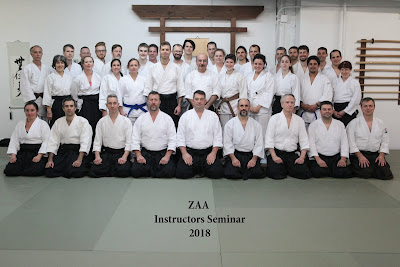 Posted by SE Lindberg at 11:39 AM Links to this post

Email ThisBlogThis!Share to TwitterShare to FacebookShare to Pinterest
Labels: Aikido

This post describes how we (Mushinkan Dojo members under Sensei Domaschko) are using photographs to make cartoon-like figures for an Aikido student manual. The process can be readily applied to any project in which figures are needed.  The key is to remove distracting backgrounds and features in the people so that future viewers can focus on the topic.In this example the Uke (aggressor) grabs both wrists of Nage (Sensei Domaschko): this is called "Ryotetori." 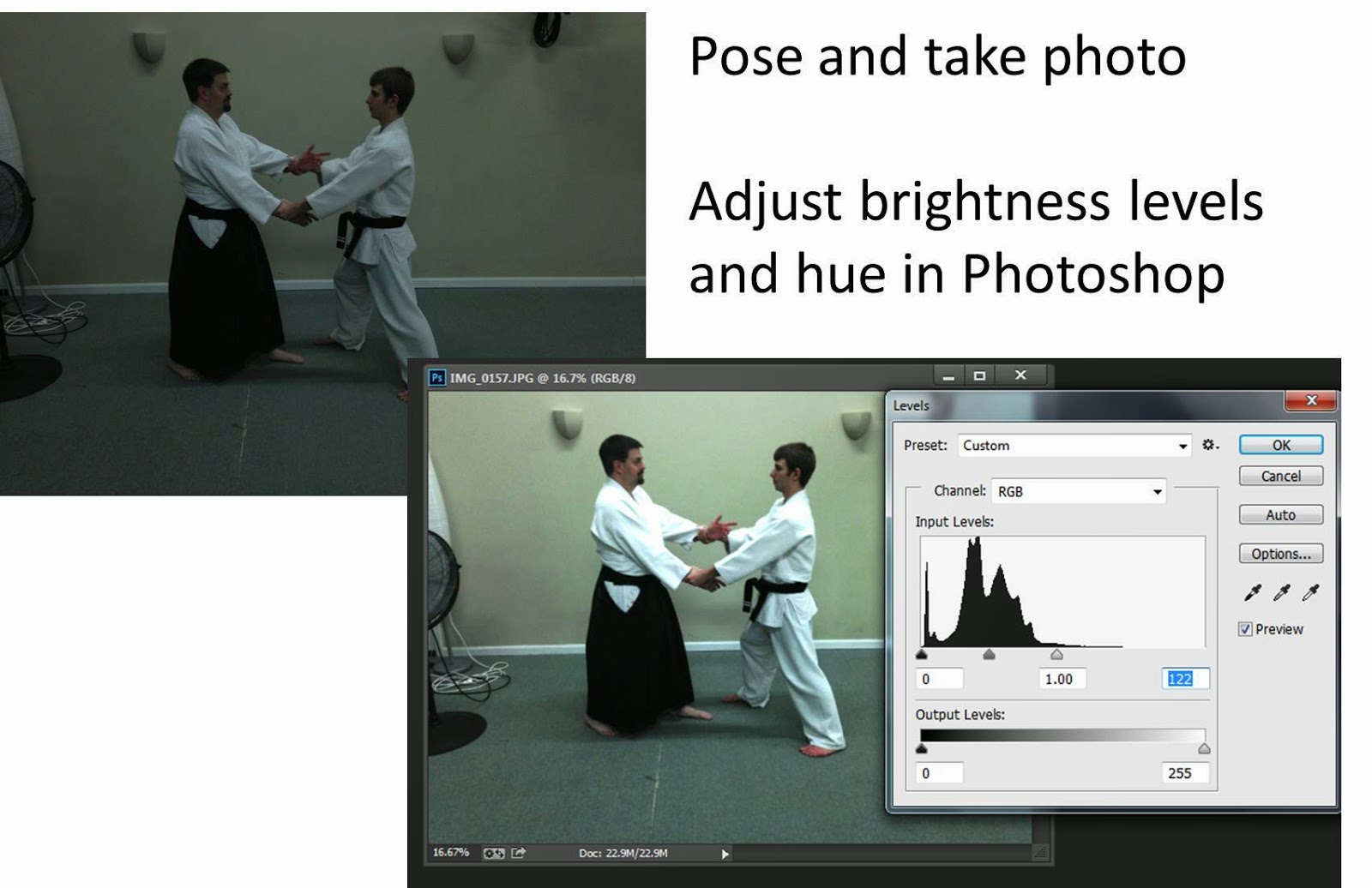 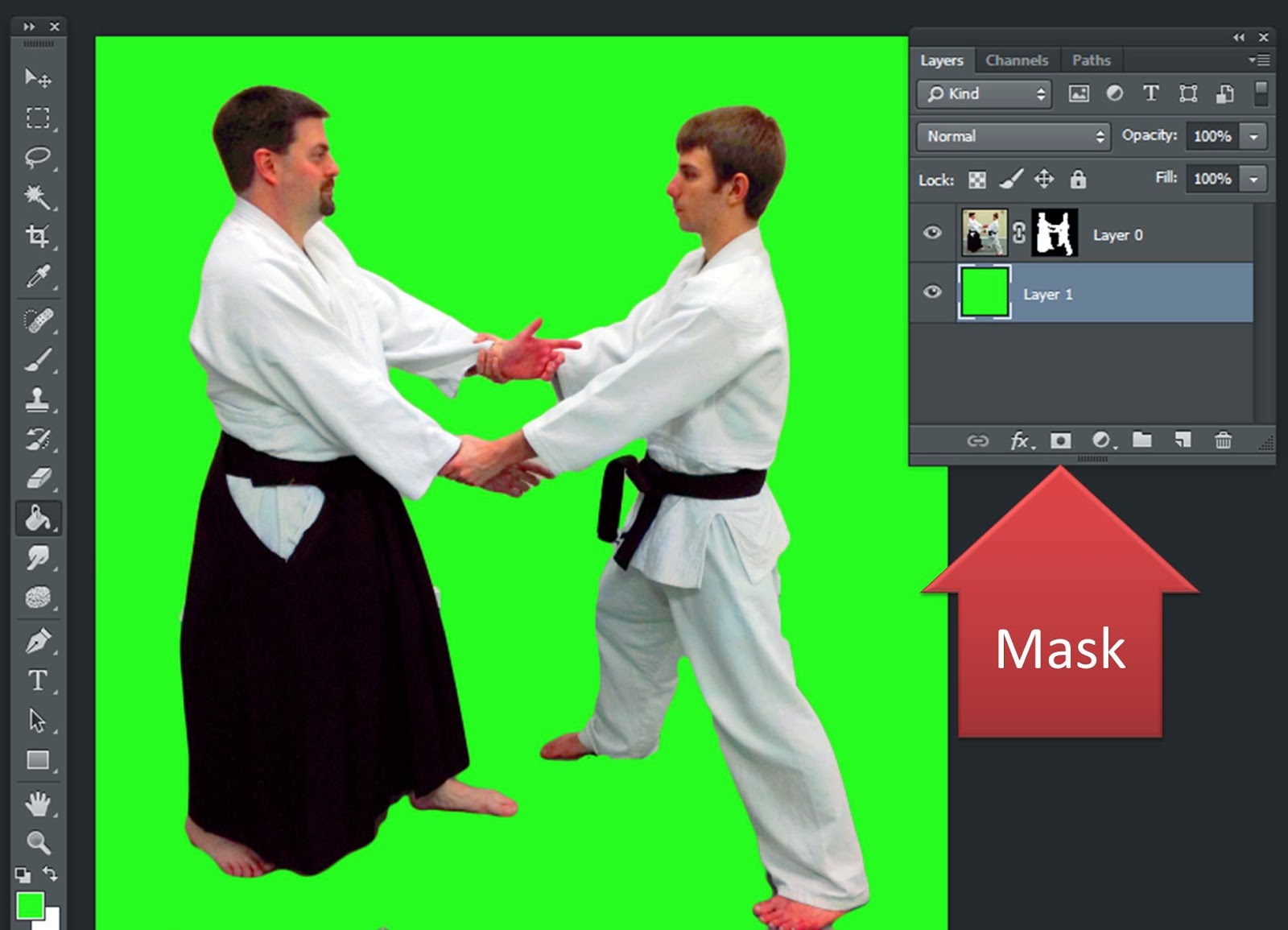 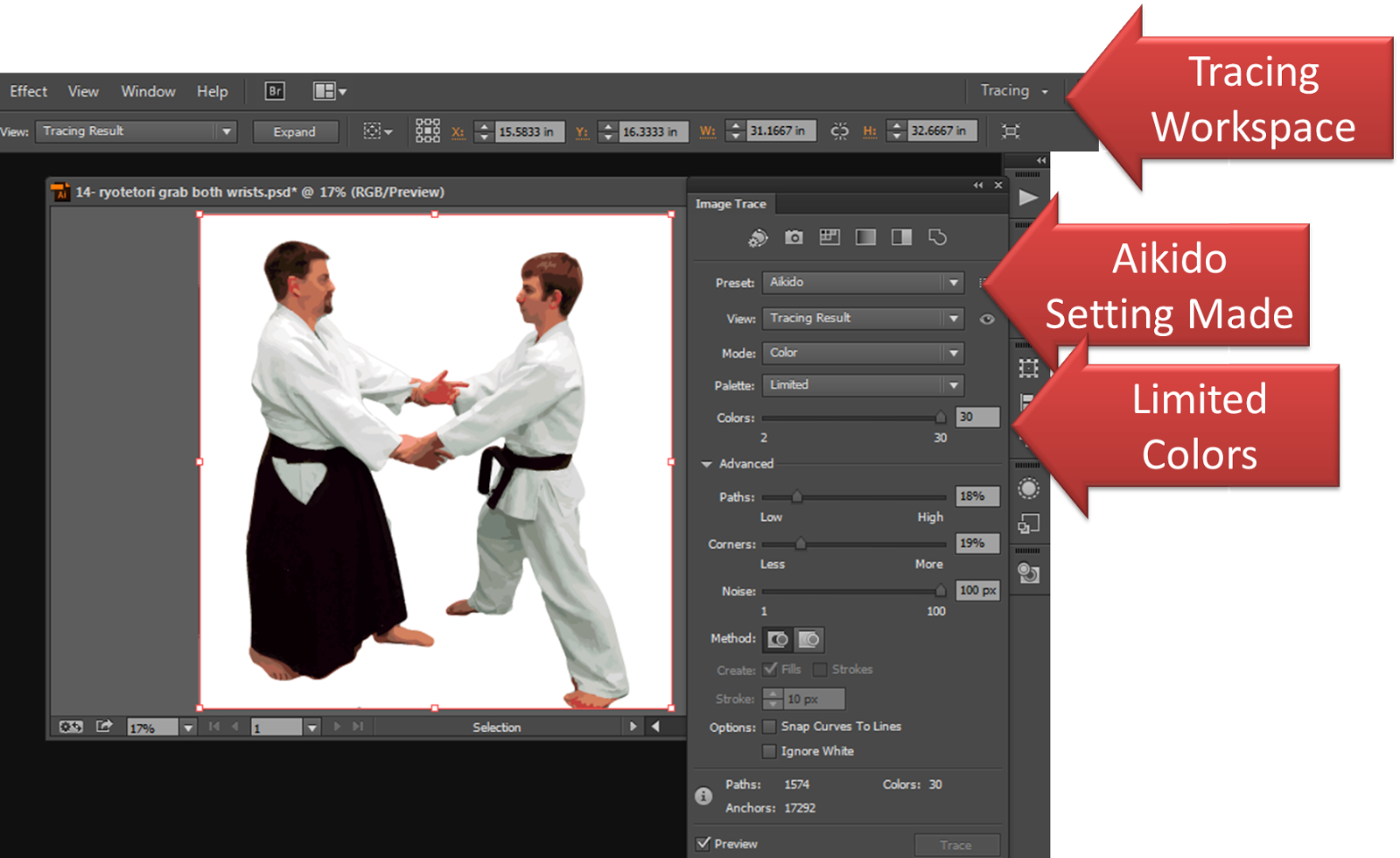 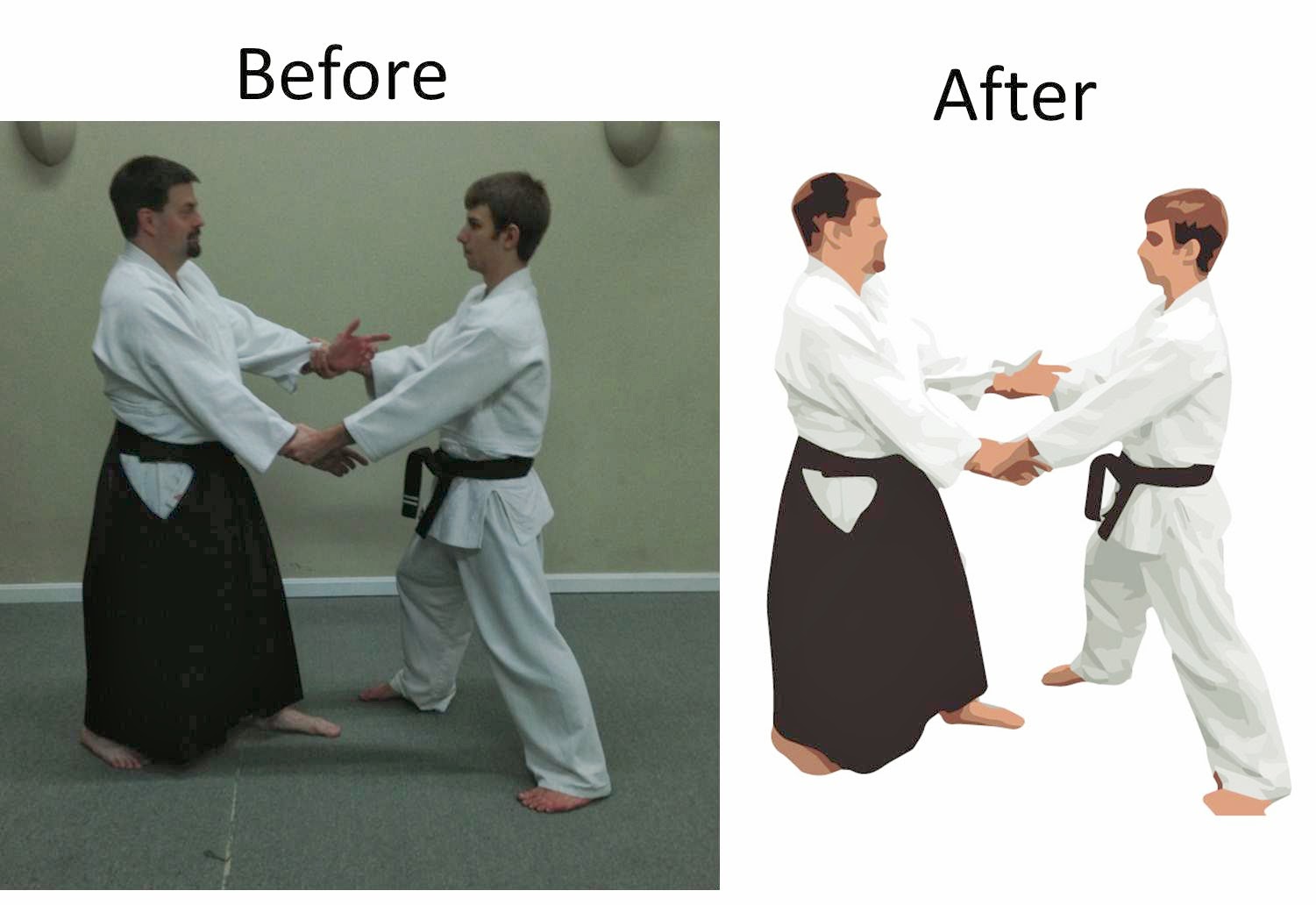 Cincinnati locals are always invited to stop by the Dojo to learn a self defence that enables you to protect yourself without inflicting harm on the attacker. We meet Mon and Wed nights.  Visit the website for more information (link). 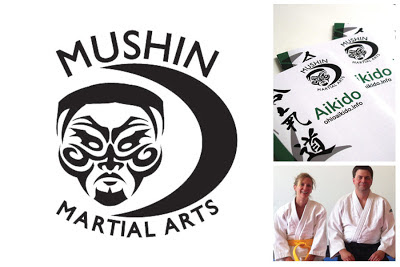 An earlier post mentioned how my artistic understanding of human anatomy was being augmented by my learning of Aikido. Aikido focuses on throwing/rolling rather than hitting/kicking, and helps one learn self-defense as well as how to fall correctly.  My family and I have been attending Domaschko Sensei's Mushinkan Aikido dojo for a few years now (Liberty Township, Ohio; classes held at Martin Martial Arts).

This posts highlights how my wife Heidi and I helped with Mushinkan's new logo and website design.  Firstly, Heidi designed a logo that roughly represents Domashko Sensei's face as a Samurai-like mask; she employed Adobe Illustrator to realize her vision (note her blog: DESIGNlab link) and Domaschko Sensei approved. Armed with Sensei's brochures and photos..and Heidi's Logo...I designed a blog-site for the Dojo: http://ohioaikido.com/

Looking to learn self-defense with an aim to subdue/control an attacker rather than inflict harm? Live near Cincinnati? This is the place.

Posted by SE Lindberg at 8:05 PM Links to this post

Aikido
Could I become a better artist by being thrown around like a sock puppet?   Newby Aikido students (myself included) quickly gain a new perspective of anatomy as they attempt to "roll properly"...only to flounder like a fish-out-of-water.  Being more aware of posing, posture, and balance is allowing me (to my surprise and delight) to enhance my approach toward composing figures.

In Cincinnati there is an local interest in Aikido, a martial art that focuses on rolling, momentum balances, and defense rather than stereotypical punching and kicking.  At the World Fantasy Convention 36 in Columbus this past Oct. I introduced myself to a local fantasy writer Stephen Leigh Farrell  (author of The Nessantico Cycle and The Cloud Mages Trilogy) -- a coworker teaches Aikido with him so I had a story to introduce myself.  Stephen  was clearly as enthusiastic about "throwing" people as much as he was encouraging them to write.  Turns out, another co-worker/friend of mine teaches Aikido so I signed up and am being thrown on a weekly basis now ("I am so a white belt" as my niece once said proudly about her own martial art expertise).


I am far from being an Aikido expert, but a key to "proper rolling" seems to be considering your body a set of axes (a "x") such that you can roll across one of them (thus limiting damage to your spine and transferring momentum across your body).  Below I illustrate this by sharing an image from the oft-reference book of Westbrook and Ratti called Aikido and the Dynamic Sphere, an illustrated introduction: I draw over the image of a man rolling with  primary and secondary axes indicated.


This "primary and secondary axis" approach toward understanding and composing figures is nicely explained by Jim Pavelec (fantasy illustrator and author of Hell Beasts, a guide for drawing evil creatures).  I met him also this October in Columbus at theWorld Fantasy Convention 36 .  In his Hell Beasts book he details "Gesture" as:

"Gesture, or the overall movement and pose of a figure, is the foundation of any good composition, giving your drawings the fluidity and force necessary to capture the viewer's eye.  You can set the mood for an entire piece by first laying out a simple gesture drawing consisting of only a few lines...There are two types of gesture lines: primary and secondary.  The primary gesture line is the fluid mark that runs along the figure's centerline.  For example, when looking at the humanoid figure from the front, the primary gesture line goes from the head, through the center abdomen, then to the pelvis, where it sifts into either the action leg or the weight-bearing leg....Secondary gesture lines,or rythym lines, are lines that flow through the form connecting secondary body parts such as limbs, tails, wings, and tentacles..." p14


Posted by SE Lindberg at 7:29 PM Links to this post