SWORD and SORCERY group on GOODREADS

The Anthology groupread is well underway, so it is time to select topics for Mar-April. The five options are really enticing... please check them out and vote: Tubb, Ball, Oden, Tolkien, and many lost continents await your judgment. Click to go to the poll on Goodread's Sword and Sorcery page

Scott Oden's Grimnir returns this Feb!
A Gathering of Ravens or Twilight of the Gods

Follow Master Ultan (moderator) on an expedition to a lost continent, like The Magic of Atlantis or Heroes of Atlantis & Lemuria

Vintage S&S by E.C. Tubb like The Sleeping City or Death God's Doom
comments and details · show results · invite friends
Posted by SE Lindberg at 7:10 PM Links to this post


Yesterday, I recalled the saddest and most beautiful book I ever read (thanks to my parents having a copy): I Never Saw Another Butterfly: Children's Drawings and Poems from Terezin Concentration Camp, 1942–1944 ....

From the book synopsis:


"A total of 15,000 children under the age of fifteen passed through the Terezin Concentration Camp between the years 1942-1944; less than 100 survived. In these poems and pictures drawn by the young inmates of Terezin, we see the daily misery of these uprooted children, as well as their courage and optimism, their hopes and fears."

This is the type of book which is great to peruse once, but then it may too powerful to read again.
Just having on the bookshelf is enough after that. A simple glance at the title on the binder is sufficient to become reflective. 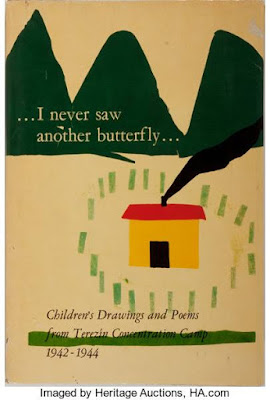 Posted by SE Lindberg at 9:55 AM Links to this post

The Last Wish -- Being Helpful

Holy cow, every now and then there comes across a fun confluence of events.
In this case, the recent 2019 Netflix series The Witcher increased interest in the Sword & Sorcery series. Of course, I moderate the S&S group on Goodreads (all are welcome to join), and we do a lot of reviews to help future readers. Turns out my 2016 review of The Last Wish is the highest helpful rank, at >300 helpful clicks.

Cool beans. It was ~2yrs ago when I captured a few rewarding feedback instances from my reviews (Good Feelings about HATE post). 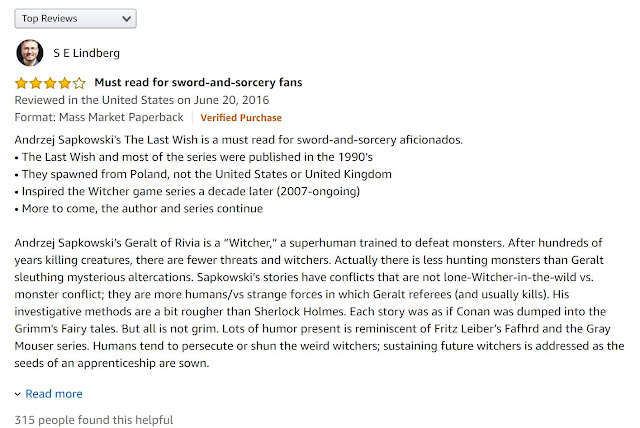 So... Toss a coin to your Witcher!

Posted by SE Lindberg at 1:40 PM Links to this post 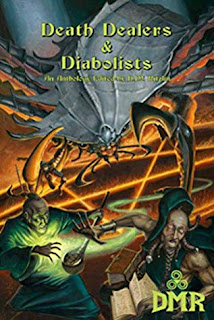 Death Dealers & Diabolists by D.M. Ritzlin
My rating: 4 of 5 stars

Reading anthologies enables readers to discover new voices and authors, and since short stories launched the Sword & Sorcery genre in the ~1920's, the Goodread's S&S Group has a 2-month groupread every Jan-Feb for this purpose. This is my first DMR anthology and I am impressed. This bodes well for many others in my to-read list (like Swords of Steel Omnibus, Warlords, Warlocks & Witches, and the The Infernal Bargain and Other Stories). DMR also hosts an outstanding blog that fans of S&S adore.

I only knew of Keith Taylor from this set. Three of the four that stick with me are ones that had less forward-momentum than I normally expect, but they ended strong and surprised me. I star my favorites below. The genre may have started in the 1920's, but anthologies like this demonstrate that it still lives strong a century later.

“Q’a the Librarian” by Buzz Dixon
Many others on Goodreads enjoyed this the most. It is true to the theme of “Death Dealers and Diabolists”. You can root for the anti-heroine Q'a since the other characters are eviler than she. Involves plenty of sacrifices and murdering children, and Q’a could not care less. However, her immorality wore off on me, so I wasn't as engaged with any of her antagonists/plight. This opening entry consumes 28% of the book too, which wasn't necessary. Would definitely appeal to Grimdark readers.

“The Man With the Evil Eye” by Keith Taylor
I adore Keith Taylor's work (i.e., Servant of the Jackal God: The Tales of Kamose, Archpriest of Anubis ). This one was ok. Three crusader buddies (Palamides, Chiron, Michael) save an alleged murderer, a runaway woman, from a bunch of thugs hired by an evil magician/collector. Was hooked up to the point when the merry men met Harmatius. The ending battle/climax ended abruptly and with less reader-engagement than expected.

* “The Vault of Geigar Varakas” by Kenneth R. Gower
The tale of the thief Kral Mazan starts slow and meandering, but it ramps up nicely. He's good at cards and doesn't like cheating (stealing is alright though), and a card match with the wealthy, cheating Varakas gets him tossed into a street. There, a conniving woman, Firien, hires him to break into Varakas' treasure trove to retrieve an heirloom item for her--and seek revenge for himself. An eruption of Lovecraftian-like horror explodes on the scene which made the build-up satisfying.

* “Lord of the Wood” by Geoff Blackwell
This tells of the hunter Ville returning to a ravaged home. He tracks the death-dealers of his family considering revenge. Not much sorcery/diabolists in here. Very, very grim. Beautiful wording drew me in:


“Cold azure glitter replaced warm red glow. Skies lay naked, the moon and stars shone like pinpricks in tough fabric. Trails of teal and rich violet whipped across the firmament. He whistled into the shimmering aurora as though to beckon it closer. The sky fox danced tonight. A beautiful night to start Ville’s last hunt.”


“Ranorax, Son of Tiger” by Mark Taverna
Haukan of the Tiger Clan is a real ass and hopes to lead his clan soon. A pesky prophecy from their shaman indicates the leader will instead be a strange boy emerging from the woods. An okay entry. Not sure if Death Dealing or Diabolism motivated it.

* “Intrigue in the Unassailable City” by Carl Walmsley
Menias returns to his island city/home after sailing abroad as a mercenary for over a decade. He has a slim hope of reuniting with Carwynn, a lady of higher class who had a crush on him before he trekked off. But to find her he has to climb up the strata of the island from the poor docks. Having been sailing with a bunch of pirates hasn't helped his network. Old "friends" slow his mission to his love interest. This is the second of three tales that were a slow brew, that delivered in a satisfying way. Nice milieu and characterization.

“Three Coins of Doom” by Bryan Dyke
This has humor in it, which many like. But I am more of a curmudgeon, enjoying the humor only if there is a deeper story. Mau-Keefe is a pirate on a cryptic quest to track down an acquaintance (Naravian), while his compatriot wizard-buddy Lucrutius drinks more than he helps. Levity was nice to include to break up the grimness of the other stories, but the purple pummich's silliness overshadowed any story arc.

* “The Age of Crows—The Return of the Swarm” by Jed J. Del Rosario
A slow start sets up the epic premise of Angel vs Demon warfare. For the first third, I wasn't sure about its direction. Duryodan is the protagonist, but he is driven by a higher power (which chimes in via first-person narrative) and was summoned by a fellow angel, Vidur, to tackle a big job. Another angelic immortal, Nakula, also meddles as they battle a corrupt Emperor. Weird corpse-possessing flies/insects play a dominant role. I’m a sucker for necromancy and angelic battles like this one.

View all my reviews
Posted by SE Lindberg at 1:20 PM Links to this post