Spawn of Dyscrasia proof copies are in!

Just received the proof copies of Spawn of Dyscrasia, and they look ready to go!  Print copies should be available soon, with ePubs to follow over Summer 2014.

In the photo, behind me, is the Ken Kelly commission (learn about the making of this --link) and the enormous diorama of the Land within Dyscrasia Fiction photographed for the backcover/interior-map (I have yet to blog the chronology of the making of that 5-foot x 3-foot beast, but my Facebook page for Lords of Dyscrasia has many snap shots).

Two video trailers are also in production. Watch out... 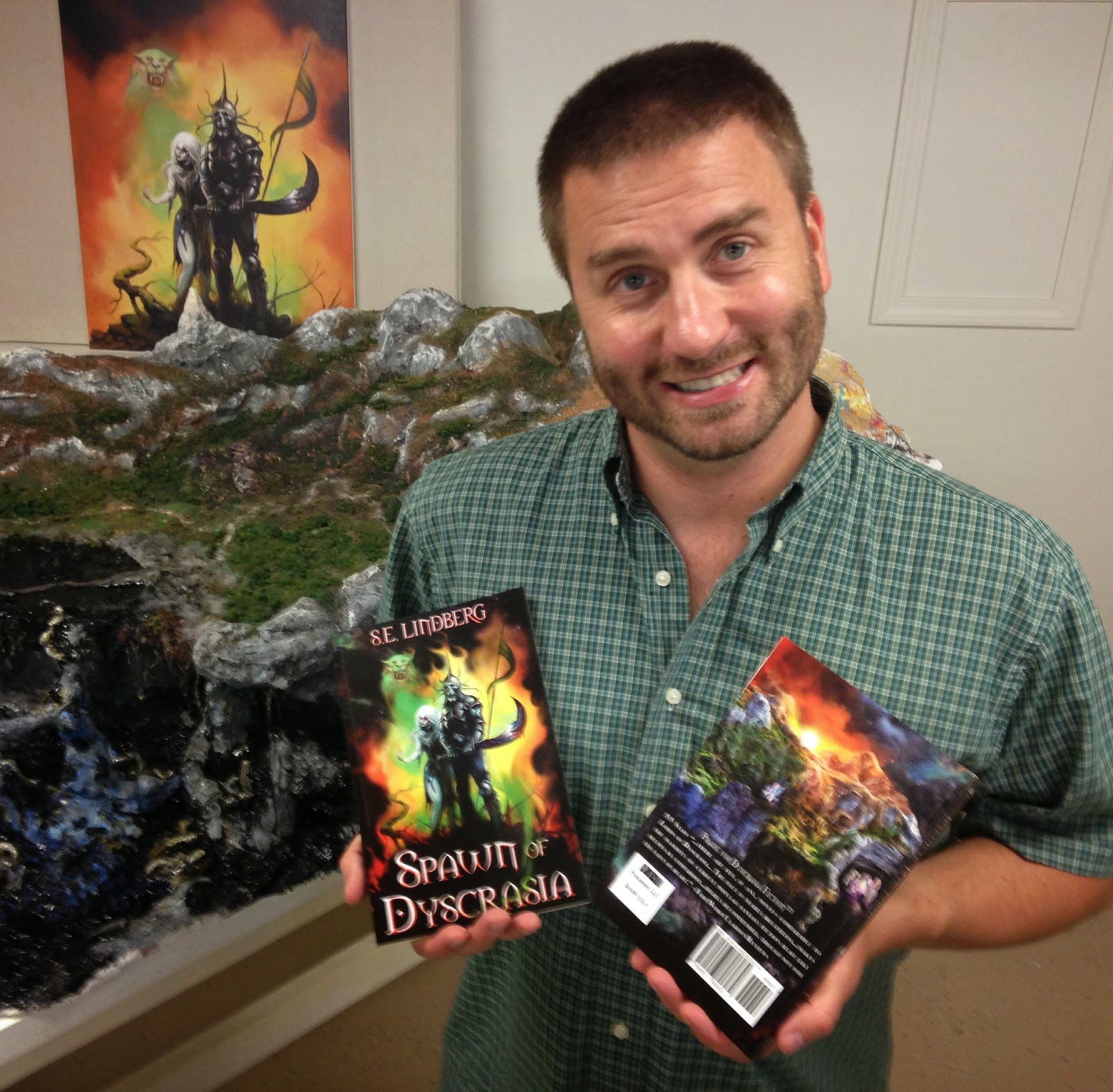 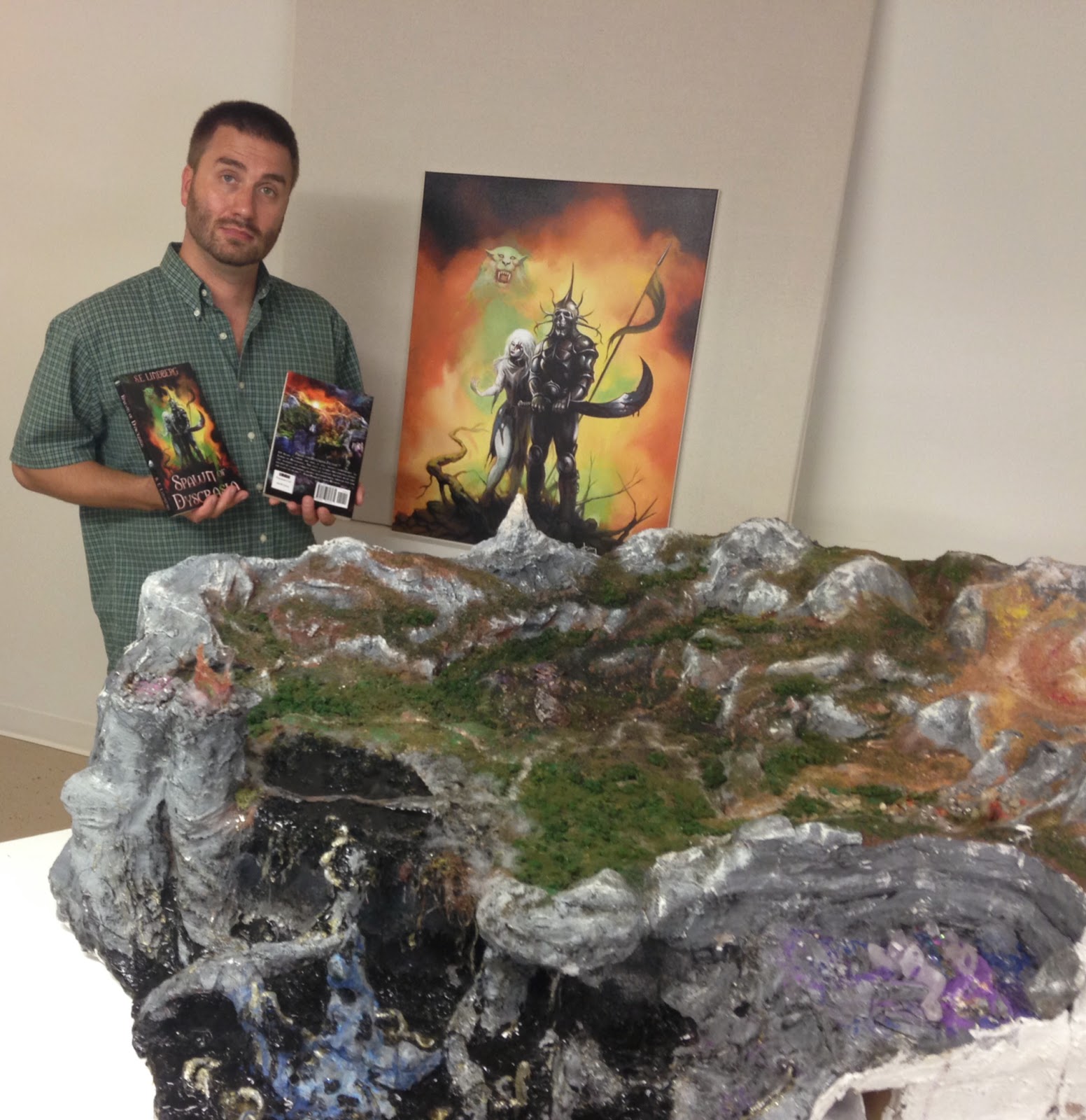 Posted by SE Lindberg at 5:03 PM Links to this post

Email ThisBlogThis!Share to TwitterShare to FacebookShare to Pinterest
Labels: Spawn of Dyscrasia

Beware the Death’s Head Fez in this is Weird, Mystery Adventure
In brief, Heraclix & Pomp is a fun, well-constructed fairy tale that will appeal to fans of historical and speculative fiction.

MYSTERY ADVENTURE: As the Book Summary indicates (copied below), Heraclix & Pomp tracks an undead man (recently raised) and a magical sprite as they hunt down a necromancer. The amnesiac, Frankenstein-like-golem ‘Heraclix’ rediscovers himself (and the history of his subparts which maintain their own volition) while the mischievous, chronologically-challenged fairy ‘Pomp’ learns human concepts. As the title suggests, this book is really about their plight, but they serve well as proxies for any introspective reader who questions “Who am I?” and “Where is my life going?” Don’t worry, the adventure is more comedic than philosophical. The unique duo navigates the Austrian & Ottoman Empires of 18th century Europe (with sorties into Hell); the below Dialogue Excerpt captures their collective voice.

With a story that hinges on two characters not knowing where they are going, or who they are, the reader should expect dealing with some uncertainty. There is also an implicit promise that Heraclix’s mysterious history will be explained, and it is. Whereas the dosing of information seemed spot on for the first half, the latter suffers from some disjointed/unexpected transitions and reveals. In all, Aguirre artfully unveils Heraclix’s past(s) well enough, even if his geographical trajectory cannot be predicted. The real strength of Aguirre’s writing is his weird style and eye for design:

WEIRD STYLE: Aguirre’s prose is steeped with entertaining weirdness (see Weird Excerpt), but could hardly be classified as horror despite the key word “necromancy” tagging it. As done for the novella Swans Over the Moon, Aguirre’s meticulous character design is again brilliant. Foremost, the appearance of the death's-head-Fez caps must be highlighted. The juxtaposition of skull-and-crossbones on the timely headpiece (popular in the 18th century) represents the necromancer, indeed the entire book, well. If this was a Sword & Sorcery tale, we’d expect to encounter a grimmer skull helmet akin to the head of Frazetta’s Deathdealer; but this book is more of historical fantasy that delivers weird myth under more inviting flare.

The elegant cover (credit artist Claudia Noble) and introductory quote from the esteemed alchemist Hermes Trismegistus, promise readers an intellectual narrative. My knowledge of history is terrible, so I undoubtedly missed many historical references, but the inclusions of real curiosities are enjoyable: for instance, the winged hussar cavalry units that appeared in angelic-costume on the battlefield make a cameo here. Historical and speculative fiction fans will enjoy this unique tale.


“Around, above, and through—yes, even through them—flowed a gathering of spectral beings, close to a hundred strong, their ecto-plasmic strands in tatters behind them as they floated up and down the stone stairway and the great, empty, circular shaft around which it spiraled. The specters were loathsome, every one of them crippled in some way. Many were missing limbs, several sported gunshot wounds, a few were altogether decapitated. But the mere sight of the apparitions, strangely, did little to affect Heraclix who was himself, after all, caught in some kind of state between life and death. Rather, it was the soft crying and plaintive weeping (of those who still had mouths, tongues, and heads with which to weep), the faintly echoed pleas that caused him to shiver…”


“What do you see?” Pomp asks.
“The past. Or at least a part of it.”
“What is ‘past’?”
“It’s what happened before now.”
Pomp looks up at Heraclix with a skeptical squint.
“I met you in Mowler’s apartment. You came there in a jar. Before, you were free. And I have a hunch that I might have once been free.”
“But Mowler pushes you around.”
“That’s precisely it. What did I have to fear from him? I am physically superior to him in every way: stronger, faster. Yet I didn’t fight back.”
“You should.”
“But I didn’t. Something held me back.”
“What holds you back?”
“Guilt.”
“What is ‘guilt’?”
“’Guilt’ is feeling bad for something you’ve done.”
“Why do you have guilt?” Pomp asks.
“I don’t know, exactly. But I think it might have something to do with . . .” Heraclix stops.
“With what?”
“With whatever happened to me before I awoke in the cauldron of blood.”


Heraclix was dead and Pomp was immortal. That was before Heraclix’s reanimation (along with the sewn-together pieces and parts of many other dead people) and Pomp’s near murder at the hands of an evil necromancer. As they travel from Vienna to Prague to Istanbul and back again (with a side-trip to Hell), they struggle to understand who and what they are: Heraclix seeks to know the life he had before his death and rebirth, and Pomp wrestles with the language and meaning of mortality. As they journey across a land rife with revolution and unrest, they discover that the evil necromancer they thought dead might not be so dead after all. In fact, he might be making a pact to ensure his own immortality . . .


View all my reviews
Posted by SE Lindberg at 12:52 PM Links to this post

The Sword & Sorcery Groupread on Goodreads.com for July August 2014 is:

It is time to discuss, read, re-read the works of the "father of the Sword & Sorcery" genre: Robert E. Howard. A lot of his work originally appeared in the pulp magazine Weird Tales, with wondrous covers by Margaret Brundage.

Please join us!
Click here to join the discussion:
Link to Discussion Thread

The Masthead Banner displays some of Margaret Brundage's illustrations of Robert E. Howard's work:
L-->R
Posted by SE Lindberg at 9:50 AM Links to this post