Mouth of the Dragon - Review by SE

Mouth of the Dragon: Prophecy of the Evarun by Tom Barczak
S.E. rating: 5 of 5 stars

Mouth of the Dragon: Prophecy of the Evarun is surreal, angelic warfare

Enjoy walking in cemeteries? This book is for you. If Edgar Allen Poe or Clark Ashton Smith were to rewrite Tolkien, they would produce something like Tom Barczak’s Evarun series. There are no elves here, but there are angels who have abandoned a land to susceptible humans. Disembodied forces and corporeal possession abound. The author’s dark, poetic style keeps bringing me back to his portfolio.

Mouth of the Dragon: Prophecy of the Evarun continues the royal Chaelus’s journey from Veil of the Dragon, which readers will want to read first. His body has become a puppet in war between good and evil. He is currently possessed by good-natured angel(s) tasked to confront the demonic, disembodied evil that was mastered him. The major conflict is between Chaelus (and the spirit Talus within him) versus the titular Dragon that has corrupted land of the Theocracy and his betrothed Faerowyn. The war escalates to epic, apocalypse. It closes well but sets up for another book.

Deep and Poetic: As revealed in many interviews, Barczak is an architect by day and writer/painter by night; he also experienced the death of a 2yr old daughter named Olivia. His artistic flare shows through with wonderful architectural descriptions including “clerestory lights” and “dark pools of cenotaphs.” He paid homage to Olivia with a character of the same name who first appeared in the Awakening Evarun set. Olivia appears in Mouth of the Dragon as Revered Mother over the Servian Order, centuries old. This echoes other instances of children saving adults. From the prelude book Veil of the Dragon, “Al-Aaron,” a child priest-warrior, saved and mentored Chaelus. Barczak continually explores the role of children saving or superseding adults: in Mouth the main duo for this interplay is Login and Maedelous.

Style: Barczak style defines his writing. He writes with entertaining paradox. In one sense, the conflict could not be more stark: good angels vs. evil demons; yet both are presented as reflections, or veiled versions of the other. The author is fascinated with sensing strange/beautiful things, such as the ailment synesthesia which refers to a secondary stimulus of senses. For instance, a subset is called chromesthesia, in which hearing certain sounds will trigger recoloring of whatever is being viewed by eye: one could be looking at a white wall and it would change to red or blue as certain music is played. Such dissonance is similar to one making sense of Rene Magritte’s Ceci n'est pas une pipe (this is not a pipe). Barczak intentionally provides beautiful synesthetic observations. Here are example excerpts:


There was nothing to see here but a sullen whisper.

Darkness seared her vision. It bled down her cheeks like oil. It drained from her mouth, like every soul she had ever taken it from.

The gray morning light, sullen, settled in full over the golden city of Paleos, the glimmer of its domes struck mute by its haze.

Everything is veiled and unsettled: A surreal milieu pervades the book. The best example is of the gossomar covered blades of Servian knights who vowed to kill only non-blooded humans (i.e. wraith like Remnants). The cover of Veil of the Dragon drawn by the author displayed this. It highlights the paradox of a military legion representing a benevolent religious organization. Again, Barczak intentionally blurs what is superficially clear. The Servian Order plays a large role again in Mouth, of course. However the cloth “veil” over the blade resonates with myraid other veils: ghostly phantoms, smokey tendrils obscuring vision, memories bleeding into dreams and reality. There are two contrarian, prophetic forces running in parallel: two sets of Servian knights, two sets of prophets, two armies…etc. It is like both good and evil are personified and stare through a window at each other; the reader is watching too, trying to figure out which one is real… or are they reflections of the reader in a mirror?

Poetic Style: There is an obvious rhythm. This is done in part with oft repeated words (azure, veil, Happas…which is an archaic word for a Roman highway), and with repeated phrasing such as:


The man’s eyes stared up at her from somewhere beyond, where he cradled himself at her feet. The stain of blood and darker things colored his chin, his face, his chest. Black tendrils had begun to lace across his pale skin. Soon, the Dragon’s Sleep would take him. Soon, the Dragon’s Sleep would take them all. Even the one she had just let go. Even her lover who was coming for her, for she knew it was the only way he could save her.


Evarun series: Evarun’s audience and backing is deservedly growing. The serial Awakening series was an independent endeavor, but not Barczak now has the backing of Perserid Press who provided the book with a Roy Mauritsen designed cover (elegantly embedding the author’s sketch).

Judging by the author’s blog, the next installment is to be called “Hands of the Dragon,” which would refer to several wizards serving all-things-dragon: Vas Ore and Vas Kael. The author has drawn them too. 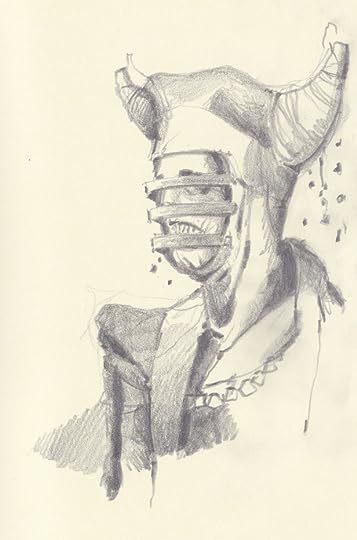 View all my reviews
Posted by SE Lindberg at 12:22 PM