It is not intuitive to seek beauty in art deemed grotesque/weird, but most authors who produce horror/fantasy actually are usually (a) serious about their craft, and (b) driven my strange muses.  These interviews engage contemporary authors & artists on the theme of  "Art &Beauty in Weird/Fantasy Fiction".

Today we host author Richard Lee Byers, known for his Forgotten Realm contributions. He holds a Master's degree in Psychology and worked in an emergency psychiatric facility for over a decade, then left the mental health field to write. He is the author of more than fifteen books, including the lead book Dissolution (first book in the War of the Spider Queen series). Follow him on Facebook (https://www.facebook.com/rleebyers) and on Twitter (https://twitter.com/rleebyers). 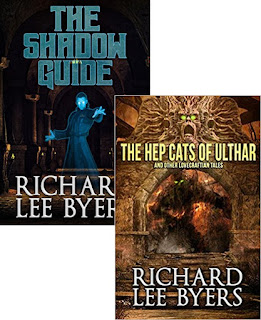 Richard Lee Byers has recently participated in interviews with (a) GdM Grimdark Magazine #12 and (b) one focused on his recent Sword & Sorcery release: This Sword For Hire. Other recent releases include The Shadow Guide, which is another and rather darker heroic fantasy book, and TheHep Cats of Ulthar and Other Lovecraftian Tales. You can findthose and all his work on Amazon. Here we’ll focus on his approach to making horror pleasing, reveal his muses for creating beautiful dark fiction.

1) SEL: Geographical Muses: One of my favorite Clark Ashton Smith tales is Genius Loci (1933) in which an artist, Amberville, turns mad when he paints a landscape that happens to embody the effigy of the land's deceased owner. Ghosts, and muses, can be geographic in nature. Noting that you were born in Columbus OH, which many Sword & Sorcery authors have roots (i.e., Swordsmen and Sorcerers' Guild ofAmerica members Andre Norton, John jakes, Roger Zelazny…), is there any evidence you have to support the crazy notion that Ohio localizes S&S muses? [sidebar: SEL has lived in OH since the 1980's and wishes for such a genius loci]. Perhaps you have memories of Ohio has haunted or inspired you? If not Ohio, another geography?

RLB: Alas, no. To the best of my recollection, there was nothing notably swashbuckling, barbaric, or eldritch about Ohio when I was growing up there. But I was fortunate enough to find a circle of friends who shared my enthusiasm for fantasy, SF, and horror. I imagine that played a role in my ending up as a genre writer. 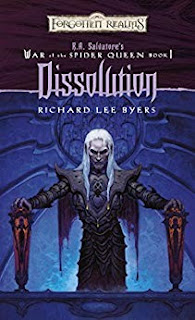 2)  SEL: Early weird fiction masters like Edgar Allen Poe, Clark Ashton Smith, and Howard Phillips Lovecraft wrote letters and essays on “Beauty,” and they all generally espouse that beauty is not necessarily within art (i.e., a book or poem), but it is the conveyance of a feeling. Is there beauty in horror/weird fiction? Is there beauty in the repulsive?

RLB: Sometimes the repulsive is simply that. Realistic images of slaughter, torture, etc. sicken me as is, I imagine, the creator’s intention. But I think that when a horror story is based in the supernatural or some SF premise, there can be beauty even when something monstrous in being depicted. That’s because our curiosity, fascination, and sense of wonder are being engaged at the same time as our sense of dread.

3)  SEL: Do you have any “dark muses,” i.e., things that terrify/repulse you but you feel compelled to write about them.

RLB: I don’t know. Maybe not. I’m not fond of heights, and some of my more popular characters frequently fly the skies on griffon-back, but that experience isn’t portrayed in a way intended to scare. I am quite conscious of the dark side of human nature, our capacity for cruelty, selfishness, bigotry, fanaticism, etc., and many of my stories try to comment on that on one level or another, but my concern there is so general that I don’t know that it indicates I have a “dark muse.”

4)  SEL: You have a degree in psychology and worked in the mental health sector; how has this informed your writing (psychology of characters...and or readers expectations)?
RLB: I’ve been out of the mental health racket for a long time now, and today I seldom consciously think of personality theory and such when writing if, indeed, I ever did. But back in the day, I did interact with psychotic and sociopathic people on a daily basis, and I’m sure that getting a sense of who they were and how they viewed the world provided insights I still draw on when creating characters.

5)   SEL: Rorschach Test: What do you see? Ok, bear with me since this is question a game/gimmick of sorts. I wanted to reinforce your mental health background in a fun way. As a scientist who performs image analysis on data, I apply math on photos to quantify microstructure of materials. I took the liberty of processing two images you should be familiar with the content. Figured it would be interesting if you commented or interpreted this abstract version, and described what you see. There is no intention for any real psychological test, but figured this exercise may also reinforce your feelings on different perspectives.

RLB:
Image 1: Guys hanging around the brothel parlor waiting for their turns.
Image 2: The faces of somewhat thuggish-looking twin brothers.

6)  SEL: Do you practice other arts beyond writing? If so can we share them (i.e., images of fine or graphic art) or mp3s (of music). Guess you could mention martial arts too.

RLB: I don’t paint, play music, etc. I did put in 25 years as a fencer (epee, mainly, although I fenced foil and sabre, too) and still think of myself as a fencer even though I haven’t been inside a salle in a while. I miss it, but my right knee is showing the wear and tear of catching my weight and momentum through 25 years of lunging. So, sadly, the more prudent course may be for me to just keep going to the gym three days a week.

7a) SEL: Forgotten Realms (a):  Writing dark fantasy that is acceptable for the young adult crowd requires balance; how does you go about presenting scary settings/events in fun ways?

RLB: Honestly, no editor ever said to me that Realms fiction was targeted at the YA market, and I didn’t think of it that way. I did have an understanding that the publisher didn’t want writers to go all XXX-rated or splatterpunk, so I didn’t. When it came to generating a sense of dread, I don’t think it cramped my style all that much.

If you look at the masters of classic horror, they depicted terrifying and even grisly events, but they rarely if ever went on for pages with detailed descriptions of torture, dismemberment, and what have you. Appeals to the reader’s sense of the uncanny and the depiction of the viewpoint character’s emotional response to the strange and threatening saw them through. I guess I tried to achieve similar results via similar methods.

7b) SEL: Forgotten Realms (b): If you were a Zulkir (master magician) what discipline would you practice (Evocation, Transmutation, Abjuration, Enchantment Illusion, Conjuration Necromacy, Divination)? Perhaps you have an RPG character for this. 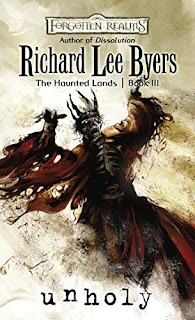 I’ve run some magic users in RPGs over the years. I don’t think I ever had one who specialized in one particular school of magic. But you can bet they all threw fireballs and lightning bolts.

7c) SEL: Forgotten Realms (c): Can you comment on Szass Tam's artistic flare (the necromancer character in the Haunted Lands Trilogy) and/or comment on the muses you drew upon for him?

RLB: I don’t recall thinking of Szass Tam as an artist per se, but in the trilogy, his goal is to destroy the universe and replace it with something better. I guess that would be the ultimate act of artistic creation if you want to look at it that way.

As far as how I portrayed him, well, he was a preexisting character in Forgotten Realms lore, which indicated he was a wily skull-faced undead master of the dark arts. To that, I added the idea that his ultimate goal was the destroying and rebuilding the universe thing.

If you look at all that, a skeletal undead villain out to kill everybody, you realize the potential for cliché, one-dimensional characterization, and portraying a guy who comes across as a virtual parody of the evil mastermind archetype. I tried to avoid that by resolving that Szass would never feel what a standard arch-villain would feel or do what a standard arch-villian would do unless the plot required it. So in the story, he doesn’t gloat or fly into rages and isn’t needlessly cruel. Rather, he forms friendships and shows mercy. He’s someone you might enjoy hanging out with if you didn’t know he was planning to obliterate you and everyone and everything you cared about.

7d)  SEL: Forgotten Realms (d): Please comment on the creative process when writing for shared worlds (Forgotten Realms) vs your individual work (i.e., featuring your character Selden in This Sword For Hire or Billy Fox in Blind God's Bluff). 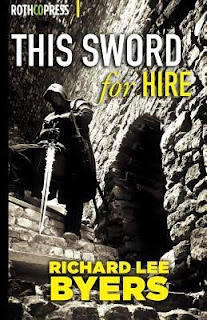 RLB: To my mind, there are two main differences:

The first is expressed in the adage (if I knew who originally said it, I’d give credit, but I don’t)  “Don’t blow up the moon.” That means people other than you are working in the shared world and the owner of the IP intends it to generate product and revenue for a long time to come, so you can’t tell a story that would mess things up for everybody else.

Such a story doesn’t have to involve blowing up the moon, sinking a continent, etc. The issue can be subtler than that. Many shared worlds are built around fundamental conflicts and mysteries. If you’re already a fan of the shared world, resolving one of those conflicts or solving one of those mysteries may be the first story that occurs to you and one you’d be thrilled to tell. But it’s one you probably can’t tell because doing so would close out a part of the franchise that people like and would otherwise generate future products.

Now, occasionally, you can tell a story like that if the IP owner has decided it’s time for the franchise to move on to a new phase in its history. I’ve done those world-changing epics a couple times in the Forgotten Realms. In my experience, if the publisher wants a story like that, they’ll ask a trusted writer with experience in the shared world to write it. You won’t get such a gig if you’re a newcomer.

Now if you’re writing in your own universe, you can do anything you want anytime you want. Although if you’re writing a series, you too may want to be careful about writing something that’s apt to make future stories less interesting or maybe even superfluous altogether.

The second difference is that to do shared-world work, you need to be flexible. You could go to your editor with a great idea and be told, “Sorry, we already have an elf-centric book for this year” or “So-and-so is already going something set in the Red Kingdom.” If that turns out to be true, it won’t do you any good to argue or sulk. You just have to come up with a different idea.

Obviously, if you created the universe of the story and are the only one working there, you won’t have such a problem. I think, though, that it still behooves you to be open to feedback. You don’t want your editor to decide you’re a pain in the ass to work with.

Image (1) RLB’s “brothel line” is actually a tribute to his “Ape of the Day”, a long occurring tradition of RLB on Facebook. Follow him (or on twitter) and you’ll enjoy the flippant posting of “apes” in various media. Image is in public domain. 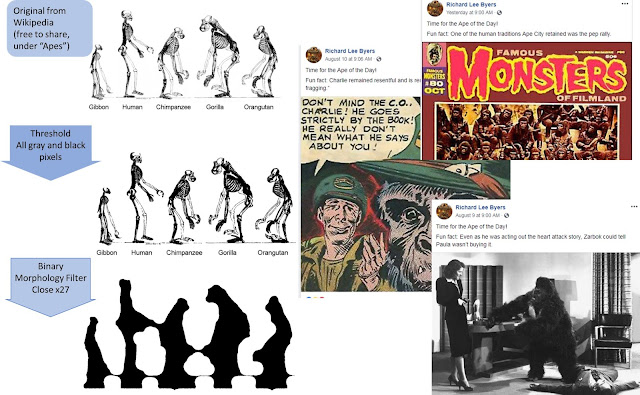 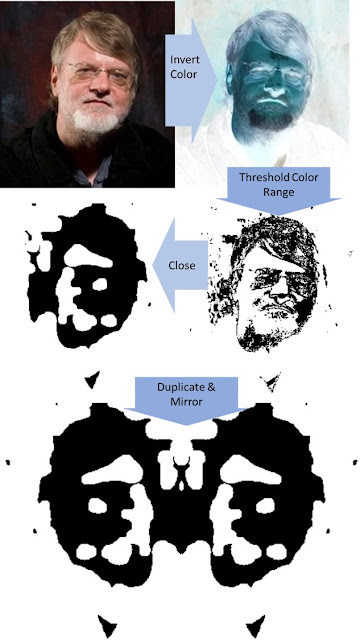