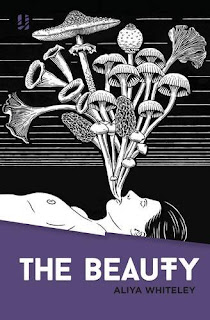 "They were found in the graveyard, springing from the decaying bodies of the women deep in the ground, and they were found in the woods, spreading themselves like a rug over the wet earth. The Beauty were small at first but they grew and took the best qualities of the dead. They sucked up through the soil all the softness, serenity, hope, and happiness of womankind. They made themselves into a new form, a new north, shaped from the clay of the world and designed only to bring pleasure to man.

But the Beauty knew form the many experiences of the women that had gone before, that men did not always love what was good for them. Men could attack, hurt, main and murder the things that came too fast, too suddenly, like love..."  -- excerpt from ‘The Beauty’

It is not intuitive to seek beauty in art deemed grotesque/weird, but most authors who produce horror/fantasy actually are usually (a) serious about their craft, and (b) driven my strange muses.  These interviews engage contemporary authors & artists on the theme of "Art & Beauty in Weird/Fantasy Fiction."

Aliya Whiteley has written over thirty novellas and short stories in a range of genres. Her excellent novella The Beauty offers a compact dose of weird fiction in which humanity is evolving into mushrooms. It is entirely unique, but could be described as a mashup of Kafka’s body horror (The Metamorphosis), Golding's social dynamics (Lord of the Flies), and James' infertile dystopia (The Children of Men). “The Beauty” is an action-packed tale saturated with philosophy on "what is beautiful?" and "what is humanity?", a true must-read for those who enjoy intellectual meat (shrooms?) with their adventure fiction. Let’s learn more about Aliya Whiteley and her muses. 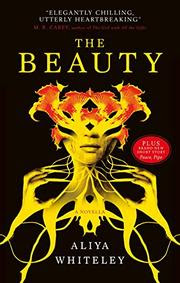 AW: I don’t remember finding many mushrooms in Ilfracombe, but certainly I grew up feeling that it was filled with strange events, from a ghost in a decaying hotel to the tall, triffid-like plants that grew in an old explorer’s garden. These things have appeared many times in my fiction, and I’m still writing about it now.

The Beauty is set in the Valley of the Rocks, which is a real place close to Ilfracombe with an almost volcanic landscape; it’s a few miles from where I grew up, and I remember visiting it and feeling that its bare, rocky ground was more suited to a horror story than any romantic tale (the most famous novel set in that area is RD Blackmore’s Lorna Doone: A Romance of Exmoor, first published in 1869). Spooky things always seemed to happen in Devon – but perhaps that’s down to my teenage imagination, which liked to find monsters and darkness in every situation.

AW: These are the kind of questions I think about a lot, and haven’t found any answers for! I suspect that beauty is one of the really big concepts in human existence that deserves a lot of interrogation. What is it? When and how does it come into existence? Does something have to be universally considered beautiful to deserve the description? If one person finds it hideous, does it forfeit that idea? Perhaps everyone has different thoughts about this area, as well as having different definitions of beauty.

There’s a moment in The Beauty where the narrator, Nate, comes across a glossy women’s magazine from a time before the death of all women. He doesn’t recognize the pouting figure on the front cover as beautiful because that stylized version of beauty has now disappeared from the world. Nathan then goes on to find things that we would consider grotesque, even horrifying, to be beautiful. It’s all connected to his perception of what life is about. He finds beauty in growth and change. I wonder if uncovering our own personal ideals of beauty rests somewhere in better understanding the concepts that underpin it. So, on those terms: yes! There can be beauty and horror in many things, simultaneously, including weird fiction.


AW: Do you mean the fungal creatures that erupt in the book? I find them to be both. And also upsetting, and horrible, and challenging, and reassuring. They mean that life goes on, whether we want it to or not. I’m interested in the idea that nature will find a way, but possibly that way doesn’t have to fit any human morality, or concept of beauty. There’s a tension between humanity and nature in the book. So often nature is described by humanity in terms of its beauty to our eyes. I found myself wondering, while writing this book, how much of that is another method of survival. Are we less destructive to those things we find aesthetically pleasing? (Yet more questions I don’t have an answer to! But I think I write to explore these questions, not to answer them.)

AW: I eat lots of mushrooms, and I’m a bit perturbed when people tell me that I’ve put them off mushrooms! I love them. I make a brilliant mushroom stew with cheese and walnut dumplings. Although I have occasionally found non-edible mushrooms when walking my dog in the nearby forest and felt a bit disturbed by them, if I’m honest. Particularly if they’re yellow and strangely solid, or growing in large clumps to take on monstrous shapes. They are fascinating, aren’t they? I remember reading an article about the mass extinctions of life that have taken place on Earth, and how fungus thrives afterwards, with so much decaying matter to feast upon. I think that must have been lurking in the back of my mind when I started writing the book.

"When [William] told me of his journey, that was how he finished it--he fitted there. I find this to the strangest of expressions--how does one fit in with other people, all edges erased, making a seamless life from the sharp corners of discontent? I don't find anything that fits in such a way.  Certainly not in nature. Nothing real is meant to tessellate like a triangle, top-bottom bottom-top. The sheep will never munch the grass in straight lines."  -- character Nathan speaks in 'The Beauty'


AW: I don’t think about fitting anywhere, really. I’m very interested in exploring genre, so many of my books have horror, science fiction, crime or fantasy elements mixed in with commercial or literary approaches to prose. Another way of putting it might be to say that I like to write whatever I want to write, and let other people worry about the definitions when they’re trying to sell it or explain it. That suits me fine.


AW: My first thought was that I was looking at a map of some strange outcropping of land, surrounded by psychedelic seas. It looks like my kind of place! I bet they tell good stories there… My brain also wants to turn it into a sideways view of a face, perhaps a child’s face, with an upturned nose and a chin resting on one finger. Lost in thought. Can an image be a map and a person? And a mushroom, of course.


“My name is Nathan, just twenty-three and given to the curation of stories. I listen, retain, then polish and release them over the fire at night, when the others hush and lean forward in their desire to hear of the past. They crave romance, particularly when autumn sets in and cold nights await them, and so I speak of Alice, and Bethany, and Sarah, and Val, and other dead women who all once had lustrous hair and never a bad word on their plump limps...Language is changing, like the earth, like the sea. We live in a lonely, fateful flux, outnumbered and outgrown." -- From 'The Beauty'

AW: You’re right that I was influenced by theatre first, and started out by writing stage plays before deciding to switch to novels. It was all about the concept of voice. A lot of my writing is in first person for that reason. I love being able to capture and sustain a person’s voice, and I haven’t found any form that allows me to do that so completely as the novel/novella/short story. It can be an immersion into somebody else’s head, for the writer and the reader, and I find that so powerful.

Also, the subjectivity of it is so involving. The Beauty was so much fun to write because nobody viewed these mushroom creatures in the same way, and therefore refused to accept them into their own narrative in the way that the storyteller figure wanted to present them. There’s such great tension in that. Which story do we choose to accept about our own pasts and futures? We’re all telling stories and perfecting our own voices all the time by subtly rewriting our own experiences and feelings. That was brilliant territory to explore.

AW: I don’t plan in advance. I sit down with my notebook and pen and start putting words down on paper. I’d just finished writing a novel with a female protagonist that had a repressed, strict tone to it and so I picked up a fresh notebook and started writing and the first paragraphs of The Beauty, in Nate’s voice, came out. I loved his voice straight away, and I kept going, really enjoying the freedom to let the words flow.

As I started to get a sense of what the story was about I was nervous about the subject matter and getting the voice right but early on in the process the thought came to me that Nate could barely remember a world without women, so he wasn’t going to hold a lot of set viewpoints about gender. That helped me to let go of the idea that I had to write a man. I wrote a person trying to make sense of new things, changing things, and finding beauty by embracing those changes.

I think it’s really interesting to consider how the book may have been different if I’d imagined all the men dying and the women being left behind. What decisions would they make differently, as individuals, as a group? But Nate’s voice cropped up first, and that’s the voice, and the story, I told. Maybe I’ll try it the other way around some time.

AW: For US readers, my novella The Arrival of Missives will be published by Titan in November 2018. That’s another story which uses the natural world in surprising ways and doesn’t belong to one genre. It’s set in England in 1920, and begins as a coming of age story about a girl who adores her teacher, and becomes – I don’t know, maybe science fiction? The Arrival of Missives is already available in the UK from Unsung Stories.

For UK readers, my new novel The Loosening Skin will be published in October 2018 by Unsung Stories, and that contains similar elements of body horror, but intermingled with a detective story and an examination of love in much the same way as The Beauty examines our concepts of beauty.

Thanks for the opportunity to give these novels a mention, and to chat about The Beauty! I enjoyed it.

SEL: After the interview, I provided the below Image Analysis workflow that transformed her portrait into the abstract tile. What did she see in herself?

AW: Look at that! I felt certain you'd used the image of a mushroom as your starting point. I must have mushrooms on the brain... 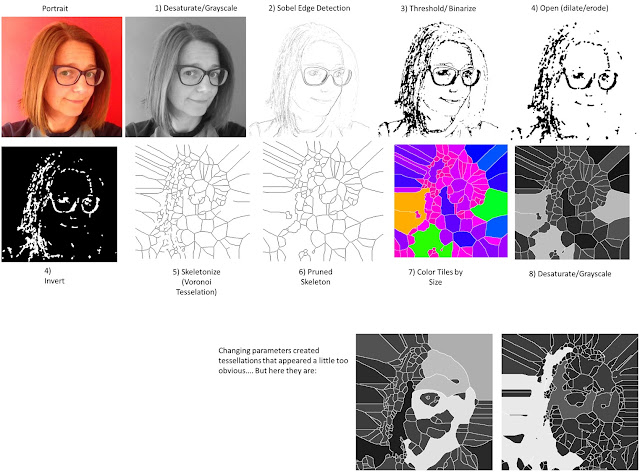 Aliya Whiteley was born in Barnstaple, North Devon, in 1974 and grew up in the seaside town of Ilfracombe which formed the inspiration for many of her stories and novels. She was educated at Ilfracombe College and gained a 2:1 BA (Hons) degree in Theatre, Film and Television Studies from the University of Wales, Aberystwyth in 1995. In 2011 she was awarded an MSc in Library and Information Management by the University of Northumbria; her dissertation involved conducting a case study into the research techniques of modern novelists. She currently lives in West Sussex.