The Thief of Forthe and Other Stories - Review by S.E. 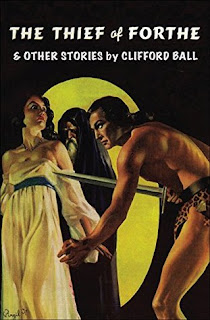 The Thief of Forthe and Other Stories by Clifford Ball
S.E. rating: 4 of 5 stars

Thanks to the Goodreads Sword & Sorcery group for bringing Clifford Ball's The Thief of Forthe and Other Stories, with vintage cover art by Virgil Finley, to my attention; also, thanks to DMR Dave Ritlzin for compiling great collections like this one (and others like The Sapphire Goddess: The Fantasies of Nictzin Dyalhis).

As the introduction reviews, these tales emerged in the wake of the death of S&S "father" Robert E. Howard in 1936. Clifford Ball was one author stepping up to try and fill the void in pulp magazine collections (Weird Tales). He is relatively obscure, but I speculate that these tales may have been very influential to others (like Leiber and Wagner). There are six in this collection. Conan the Barbarian Marvel Issue #264 (1993, Roy Thomas and John Watkiss) reintroduce Karlk, the evil sorcerer, as an enemy of Conan in a tribute to Clifford Ball (along with Throll, and the white apes of Sorjoon).

The Sword & Sorcery Tales (stories 1-3): These occur in kingdoms adjacent to Ygoth, called Forthe and Livia. There are explicit call-outs to Burrough's white apes from Barsoom. In all three, the protagonist(s) are held captive or in jail and escape.

(1) “Duar the Accursed” May 1937 Weird Tales. 5-star
The mysterious barbarian king Duar battles Lovecraftian horror while searching for the powerful Rose of Gaon. This was dark, fun adventure that set the stage for lots more Duar...but that never seems to have materialized. As an immortal, intelligent barbarian, Duar seems to be a precursor to Karl Edward Wagner's Kane. Duar's companion is a female spirit, Shar, who monitors him via the ether and counsels him on demons.Unlike the following stories, Duar's capture is more intense and his escape more interesting.

(2)“The Thief of Forthe” July 1937 Weird Tales3-star ...and...
(3)“The Goddess Awakes” Feb. 1938 Weird Tales.3-star
The "Thief of Forthe" introduces us to the thief Rald. Rald is contracted by Karlk, an evil wizard, since a mission requires some sort of corporeal brawn, which is simply to lift a bar from a door. The melodramatic interactions with the King and Queen are full of incongruity; they seem to like Rald despite his criminal nature. The wizard and Rald are eventually caught and tied up, and then left alone to escape!

"The Goddess Awakes" continues with Rald, this time gaining a partner. Most S&S prior had a lead protagonist (ie Conan) and a semi-serious delivery, but here we have a humorous duo featuring a barbarian thief (Rald) and a sly, philosophical mercenary (Thwaine). This screamed of a Fritz Leiber's "Fafhrd & Gray Mouser" influence (ie The Swords of Lankhmar. However, Leiber's first story of his own duo was published the following year (1939, "Two Sought Adventure" in Unknown). The end-boss had a Sphinx quality to it, but was too easily dispatched. In any event, this was slightly better than the second tale, but still too shallow for my tastes.

(4)“The Swine of Ææa” Mar. 1939 Weird Tales.5-star
Having sought out this collection for the first three, these others were just unexpected fun. This one has a slow setup, but the characters are engaging. They include an author documenting a wild story from a drunk sailor. There are echoes of statuesque end-bosses (Buddha and the Sphinx) that began in "The Goddess Awakes". The story is delivered with care and the descriptions are cool too:


“That’s queer shrubbery for these parts, isn’t it?” It was. I never saw such strangely shaped trees, with limbs that twisted like writhing snakes, or such oddly formed, three-cornered leaves as those growing on this island. Now that we were closer, things did not appear to be entirely green; there was a red network through some of the leaves, a patter of tiny lurid veins running wild at strange angles. No two of them seemed alike. The influence of jungle odors which we now encountered must have affected me; for the thought came into my mind that the colors of the brush were continually changing, like some lizards I had seen that were readily able to merge their outlines and coloration with their surroundings. It gave me the creeps, I tell you."


"It was her eyes. They burned with a submerged fire that might have been stolen from Vulcan after he pilfered it from Olympus. I can’t tell you what color they were; they must have taken on all the tints of the rainbow, for one minute I thought them to be blue and the next I decided they were either gray or green. Another look, and I was prepared to swear her eyes were as yellow as a panther’s. You can’t describe the color of flame-tips; they keep changing too rapidly. The next best thing is to discover the source and look at the fuel. It was her eyes, not her features, that registered the “here-I-am” invitations, yet the woman, or girl, owned an aura of virginal sweetness..."


The whole floor of the inner courtyard was strewn with projecting rock formations which might once have been statues, but were now worn so smooth by the hands of Time and changing climates that they had lost all bold outlines a sculptor may have executed upon them. Chunks of shapeless stone, some formed groups oddly suggestive of women gossiping in the market place, or leaned toward one another as men engaged in desperate struggle. I selected one piece, in particular, which resembled a crucified man with his head thrown backward as he stared in hopeless pleading toward a silent sky. All were so worn that any carven facial contours some ancient artist may once have been proud of had been erased forever, and perhaps my impression of lines defining corded muscles and rounded limbs was a fantasy of the brain alone.

...The worn images seemed to have recovered whatever original forms they had once enjoyed; they, too, were laughing and gesticulating with queer movements. The whole courtyard was a fantastic scene, such as may have been drawn by imaginative artists depicting lost souls in Hell.

(5)“The Little Man” Aug. 1939 Weird Tales.5-star
What's this? A noir mystery with a self-confessed serial killer walking the streets? Fast and very fun. Will you understand how a thin, lithe man murders bigger men? Well...to quote the story: "Men lack faith in a thing simply because they are not able to understand it."

(6) “The Werewolf Howls” Nov. 1941 Weird Tales. 4-star
Monsieur Etienne Delacroix has a secret, and a canine-cryptid to deal with. An obvious denouement ends a short story, but the delivery was enjoyable.

View all my reviews
Posted by SE Lindberg at 5:54 AM