The Sword & Sorcery Group on Goodreads

Please join us as we host the Mar-Apr 2020 Groupreads:

A) Scott Oden - Link to Folder: Lots of Scott Oden fans here, and his sequel to A Gathering of Ravens called Twilight of the Gods was just released! Men of Bronze, Memnon, The Lion of Cairo are all fair game! Even his Conan pastiche in the Marvel Comics.

B) Tolkien Memorial Read - link to Folder: Christopher Tolkien passed away this year, so it is timely to delve into the many books he edited/extended on behalf of his father J.R.R. Tolkien. So the focus will be on books like the The Children of Húrin, but if you are inclined to discuss/read JRR's work, then do that too. It's all in the spirit of Tolkien.
Banner Credits:
Cover art by James Iacobelli for A Gathering of Ravens and Twilight of the Gods

Cover art by Alan Lee for The Children of Húrin (Interior art, the depiction of Hurin)
Morgoth seats the kidnapped Hurin on a throne in Angabad....

...taking Hurin back to Angabad [Morgoth] set him in a chair of stone upon a high place of Thangorodrm, from which he could see afar the land oh Hithlum in the west and the lands of Bereriand to the south. There he was bound by the power of Morgoth; and Morgoth standing beside him cursed him again and set his power upon him, so that he could not move from that place, nor die, until Morgoth should release him.

"Sit now there," said Morgoth, "and look out upon the lands where evil and despair shall come upon those whom you have delivered to me. For you have dared to mock me, and have questioned the power of Melkor, Master of the fates of Arda. Therefore with my eyes you shall see, and with my ears you shall hear, and nothing shall be hidden from you." 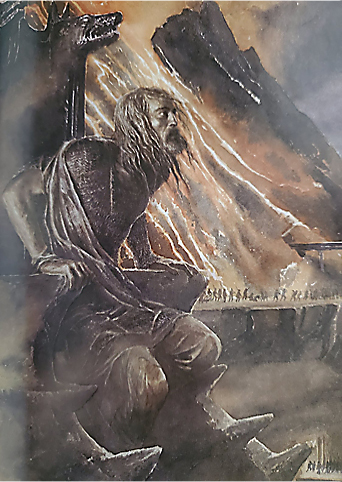