The Sleeping City - Review by SE 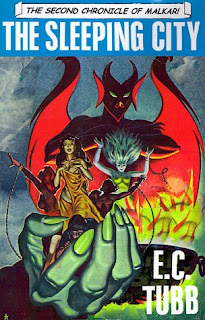 E.C. Tubb (1919 – 2010) was prolific, known mostly for his Sci-Fiction (i.e., his Space-1999 adaption and 33 volume Dumarest Saga. Thanks to the Goodreads Sword & Sorcery Group for having groupreads, I was able to learn about Tubbs’s two-volume heroic fantasy novels, The Chronicles of Malkar (both published in 1999):
1) Death God's Doom
2) The Sleeping City

I delved into The Sleeping City before I knew about the first volume, and there was no issue with that. This one starts with the mercenary Malkar assuming a throne for the city of Dashkit; he incidentally won the queen as a bride. Her name is Ishma, and, like the other few women in this book, are present only to offer their bosoms (excerpts below). The misogyny seems more suited to another era, but the book is unabashedly masculine. The men are at the forefront of all the characters of substance, and the few women exist as erotic decor or prizes. Two excerpts of many examples:


She stood at the rear of the ramparts dressed in a gown of flame, red silk flowing over the curves of her body, rubies adorning the waterfall of her hair. Her neck was bare, her shoulders, the upper swell of her breasts. On the naked flesh shone a jewel.

He felt the movement of her breasts, her hips, the enticing invitation of her thighs.

It reads much like Michael Moorcok’s style, or even Lin Carter’s Thongor. In fact, it goes so fast, the plot stumbles over itself. It propels the action regardless of consistency. One example (a minor spoiler but explains the title): eventually, Dashkit is held in a sleepless state under a storm-like spell; Malkar avoids the effects and goes on a random walkabout away from the city for magic to retaliate; when Malkar returns from being gone for ~1week, it is completely unclear who has been under suspension and who has not. Whereas his citizens and friends are frozen, his enemy Jalthar was free to roam around—but Jalthar did nothing to the city as it lay vulnerable, but instead waited for Malkar to return to battle for it.

Whatever. Malkar is always on the front-lines of danger, and always being saved by coincidence and luck, so never fear for his safety. In fact, he accidentally evokes a secret power three times at critical junctures, with no explanation or engagement for the reader to anticipate. In fact, his latent, convenient powers undermine the reasons & risks for his adventures. A shallow reason is offered at the end by a magician who explains that those powers (paraphrased) were fitting for a king, not a mercenary. As if Malkar was granted powers by usurping the throne… I guess? Or he earned them.

Malkar’s exposition is noteworthy, since he has “gut feels” that enables him to use scarce data to explain to his loin-clothed buddies (i.e., Hostig) what his enemies are thinking & doing, and thus allow him to lay traps and respond proactively. Likewise, the melodramatic dialogue is laughable at times. Many times I envisioned Adam West playing him (the ~1960’s Batman TV show may have inspired the drama).

Example Melodrama: call me a dog? I’ll kill you


“Dog?” The Benowinian stepped close and lashed Malkar across the face with his gemmed hand.

“You call me dog!” He grimaced, vile in his rage. “For that I shall feed you the agonies of hell! You will be staked on the sand with your eyelids removed so as to stare at the sun. You will be stripped and lashed with whips of wire so that the ants will come to drink your blood and eat your flesh. You will scream while being roasted over slow fires. I will burn out your eyes and sear your tongue! I will –”


The strengths lie in the fight scenes and poetic descriptions. I really did enjoy these.


He chopped and mail burst, a severed head rolling from spouting shoulders, eyes wide in the amazement of death. He beat aside a swinging blade, beat again, sent the steel in a whining arc which ended on a shoulder and clove through bone and flesh to bare the naked lungs. Wrenching free the weapon he turned, smashed aside reaching steel, thrust at a snarling face. He felt irresistible, metal, flesh, bone all yielding to the fury of his attack. A machine of destruction cutting its way through a dozen men.


A passage led from the chamber to the Temple, the Hall of Kings where statues of previous rulers stood in double line in a wide passage of gleaming marble and malachite. The glow of votive candles touched them with dancing light, drifting glows that gave the dead eyes the semblance of watchful life, the dead lips the hint of sardonic smiles.

It was naked, hairless, the skin a sere yellow, the ears shrivelled against the creased flesh of the skull. A tall jar of black metal rose from the floor to clasp it around the scrawny throat. Ancient hieroglyphics intertwined with a serpent motive covered the surface of the jar and the head had the dried, desiccated appearance of a mummy, the mouth a thin crease, the eyes sunken beneath heavy lids.


So if you are looking for a guilty-pleasure adventure, some juvenile wish-fulfillment that can be consumed like fast food (tastes good, but isn’t really nutritious), then have a go at Malkar’s chronicles.

View all my reviews
Posted by SE Lindberg at 6:31 PM