Witness the Birth of Alchemical Warfare 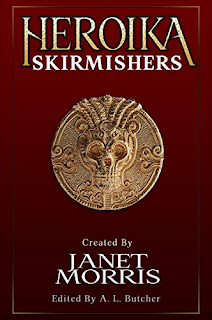 With the release of Heroika: Skirmishers, each contributor ... and one of their characters... is being interviewed by the Library of Erana. Hear directly from the Apollonius of Tyana, read “The Naked Daemon” by S.E. Lindberg, and experience alchemical warfare. Click on the link for the full interview. Below are teasers for "The Naked Daemon":

This follows Sean Poage's interview. His story engaging, tragic war story in his "A Handful of Salt". Below is his forward... click on the link to learn more about him and the story through the eyes of Gocha, an elder warrior of the Zurah tribe of Taochi region:
"At the dawn of the fourth century, BC, Cyrus the Younger hired an army of ten thousand Greek mercenaries to challenge his brother for the throne of the Persian Empire. His Greeks were victorious, but he was slain and the Greeks were stranded deep inside the Persian Empire without supplies. Their only way home was to fight their way north through the mountains of eastern Turkey to the Black Sea, as described through the eyes of one of their leaders, Xenophon.
It is considered one of the greatest feats of military history and has often been recounted and reimagined, but never through the eyes of their adversaries, the Persians, or the ancestral tribes of eastern Turkey. One event, in particular, is haunting and tragic. Today we struggle to understand the mind-set of ancient cultures, often making the mistake of seeing their world through the filter of our own values. This story is an attempt to understand a heroic perspective alien to our own."

Thanks to Alex Butcher for the interview hosting, editing, and skirmishing.