Tales from the Magician's Skull #3 - Review by SE 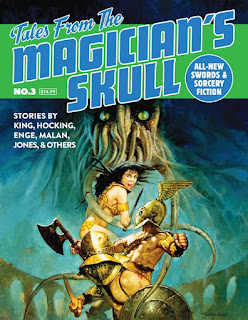 Tales from the Magician's Skull #3 by Goodman Games
S.E rating: 5 of 5 stars


"Rejoice, mortals! I have heard your pleas and returned to grant your greatest desire: More sword-and-sorcery!

Once again I will bring you tales of thrilling adventures in time-lost lands. There are swords, and there is sorcery. There are dark deeds and daring rescues..." -- The Magician's Skull speaks in Kickstarter


Should you trust a talking skull? Well, no sane person would, but I attest this skull does not lie (and I am making a habit of listening to it). Tales from the Magician's Skull (installments #1 and #2) spawned from a successful 2017 Kickstarter campaign in which Howard Andrew Jones (Sword & Sorcery guru, author, and RPGer) teamed up with Joseph Goodman (of Goodman Games, publisher of Dungeon Crawl Classics). The resulting magazine reflects this partnership, marrying great stories with corresponding RPG elements. This July 2019, the Skull resurfaced with issue #3 and promises of issues #4-6. As a backer and enthusiast of fantasy fiction, I couldn’t be more pleased.

If you missed the Kickstarters, have no worries, you "mortal dogs" (another Skull saying). Behold! Goodman Games and Amazon offer them. Future plans are as follows: "Issue #4 will release in March 2020, and others will follow bi-annually thereafter. Upon reaching issue #666, the Skull will travel to a higher plane and the magazine will end."

Appendix: The last item in the Table of Contents (below) should be the first to discuss since it is iconic: The Appendix. What a great design idea! To drive home the RPG elements of the stories, Terry Olson once again created items and Dungeon Crawl Classic RPG rules related to each story. This is really cool. Read the stories...then go re-live/play them. I enjoy reading this section each time just to re-imagine the stories (without playing an RPG).

Illustrations: The cover is by master Sanjulián (Manuel Pérez Clemente). Many full-page, detailed illustrations decorate the interior by established artists: Samuel Dillon, Justine Jones, Doug Kovacs, Brad McDevitt, Russ Nicholson (an old-time favorite from Fighting Fantasy), Stefan Poag, Matthew Ray, and Chuck Whelan. There is a short contribution in which Samuel Dillon explains how he created one the frontispiece for "The Second Death of Hanuvar." 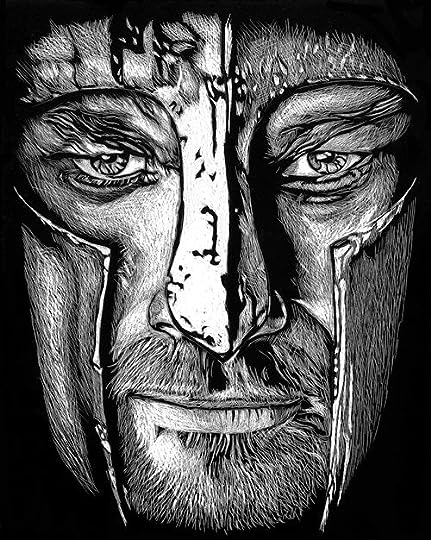 Tales #3: Contents. All six are quality Sword & Sorcery stories, and there is plenty of bonus content like flash fiction, author and illustrator notes, and the appendix of RPG-items. Most stories have some mystery or police-procedural flare; several are serials from the previous Tales magazines; others have characters appearing in other venues. For me, since I am a huge fan of Clark Ashton Smith and poetic/weird adventure (Dunsany), the last story by Sarah Newton was a true highlight.

(1) "Face That Fits His Mask" by William King. King's Kormac is available in a series of anthologies (starts with Stealer of Flesh). Kormac is a hunter of dark creatures with some supernatural abilities of his own. With the aid of a suspicious demon, he goes after a kidnapper to rescue children from an underworld full of rat-men. Even though this is not Warhammer, William King has written for the Black Library and the rat-kin resembles Skaven.

(2) "Tyrant’s Bane" by John C. Hocking. This time our King's Blade (i.e., the king's right-hand man) is sent to find a missing colleague named Viriban—well, sent after his missing corpse. The shady King Flavious wants to know what is going on in the mortuary. Benhus sets out to solve a weird necromantic tale, armed with his Nobleman's Comfort wand of freezing and his master's sword. Yes, this is the third tale of Benhus in as many Tale's magazines. It is really rewarding to see Benhus evolve. From Tales #1: “The Crystal Sickle’s Harvest. From the World of the Archivist" thieves were breaking into royal crypts, but not necessarily to steal. Why? The police-like duo of Thratos (mentor Hand of the King sorcerer) and Benhus (young mentee, warrior sorcerer) investigate. And from Tales #2, "Trial by Scarab" showcased the rapid rise of Benhus from being a dexterous student of the military arts … into something better.

(3) "Five Deaths" By James Enge: More S&S police procedurals/mysteries! I recall reading my first Morlock tale in Rogue Blade Entertainment's Return of the Sword: An Anthology of Heroic Adventure ("Red Worm's Way"). "Five Deaths" reads as two cops tracking a thief/criminal. Morlock is a thain (servant) to the older Lernaion (a summoner). Both are dwarf-like, with Morlock being a better caver and Lernaion being able to sense the demon's trail. The pair chases a murdering demon in a tale that is more Sorcery than Sword. Morlock's strange optimism balances the seriousness of the adventure well. I laughed out loud when Morlock surmised:


"The sorcerer died for a flippancy?"

Morlock's exploits are in the book Blood of Ambrose, and the first two Tales from the Magician's Skull. From Tales #1 "The Guild of Silent Men : A Story of Morlock Ambrosius", a fantasy-murder mystery fleshed out Thain Morlock's background and motivations. And from Tales #2 "Stolen Witness" the sorcerer investigator overcame his father's legacy in a compelling (pun intended) mystery regarding a stone--a device of sorts that reminded me of Robert E Howard's "The Black Stone" (1931).

(4) "The Forger’s Art" by Violette Malan. A mystery adventure regarding forged art and theft! Dhulyn (finally, a lead female protagonist) and Parno are Mercenary Brothers for hire, but in this case they are also out to avenge a fellow Brother's death. They also appeared in Tales #2: "A Soul’s Second Skin" in which the duo with telepathic skills unraveled a mystery, and accidentally caged themselves in another plane with antagonist magicians.

(5) "Second Death of Hanuvar" by Howard Andrew Jones. Twice as long as any other story herein, this one stands out. Hanuvar (a fictionalized anti-Roman general...could this be an incarnation of Hannibal Barca?) tangles with the Roman-like Dervani who have invaded his homeland. Expect espionage thriller sorties, gladiator battles, and a sorcery-saturated climax that balances all the sword fights prior. Hanuvar appears in Tales #1: "Crypt of Stars, From the Chronicles of Hanuvar Cabera."

(6) "The Wizard of Remembrance" by Sarah Newton. Wow, there are few who can roll out a tale as smoothly as Dunsany or Clark Ashton Smith, but Sarah Newton delivers this literary dose with excellence. I admit this was my first experience with her writing and couldn't be happier to discover someone "new" (to me). That's the fun of anthologies and magazines...enjoy the stories and find new authors to track down. Here is an excerpt of her voice:


"So Suven would summon the memnovores, as was his duty, and close his doors and stop his ears to the screams as the demons devoured the thoughts of his women in return for terrible gifts. Later, when the sight of their placid faces, cleansed of all care, became too much to bear, he would bow his own head and submit himself, too, to the ministrations of the memory eaters.

The Empire of Ubliax waxed mighty on the strength of its forgetting, and the savage lands of the Men of Mogor grew smaller each year. No one in the Empire knew how long its glory had endured..."

"By That Much", "Dead Wood", "The Return", and "Duel's End" by Joseph A. McCullough: These flash fiction pieces are sprinkled throughout all feature the grave digger Nick Bury. Full of whimsy and irony. Nice change of pace to complement the longer contributions.

The Appendix by Terry Olson. This is the aforementioned collection of spells, creatures, and magic items for RPG play derived from the stories.

View all my reviews
Posted by SE Lindberg at 7:12 PM