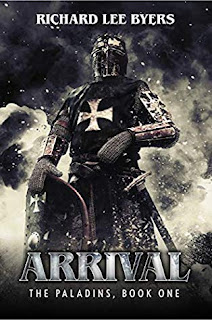 Richard Lee Byers's Author's Note in Arrival invites the reader to provide feedback regarding the future of The Paladins (the series that Arrival novella kicks off).

Note the book blurb (below) is an excellent synopsis. It combines Lost-World tropes with Sword & Sorcery, as a witch in an alternate realm summons six warriors (five Christian Crusaders and a Muslim/Saracen fighter) that team up to fight an evil force called the Stain.

It reads really fast. This is true to Richard Lee Byer's style who has a long bibliography of fantasy books, many associated with RPG games.

Would I buy Book Two: yes.

What would I want/expect:
- More explanation about the Stain: is it a curse on the land, or some mutagen? I hope for something to show the commonality in all its manifestations: Parchment-men, one-eyed-dogs, sentient mud, mutating children...
- Kolinda's plan (she could have used her six warriors behind enemy lines to her advantage, but she lead them to her homeland, but it is not clear how they are going to help still)
- The continuing reveal of the Muslim (Saracen) Jibril's collusion with the Christian Hospitalers (Ox, Ottoman), and escalating tension between the Hospitaler and the Crusaders (hot-blooded Pierangelo and his more empathetic companions: Gaspard, William)

The author is accessible at conventions (such as GenCon). After meeting Richard Lee Byers, I interviewed him in 2018. Check it out to learn more about his views on Art and Horror.


Prophecy said holy warriors would travel from another world to save the Western Kingdoms. The men who showed up were rather different.

The priestess Kolinda risked her life to travel deep into the Stained Lands and cast the summoning in the only place where the ritual could be performed. She believed the magic would bring a fellowship of paladins.

Instead it snatched six warriors from the so-called Holy Land of the Earthly Crusades: Pierangelo the fanatic, Gaspard the pragmatist, William the callow novice, Ottomar the politician, Ox the dullard, and the enigmatic Jibril.
Flawed men with no interest in helping a strange land of pagans solve its problems. Enemies who sought to kill one another only moments before.

Now, however, they must band together to escape a country blighted by the foulest sorcery and stalked by unnatural terrors like the parchment men, the One-Eyed Hounds, and the ice witch Lady Coldbreath. It’s a brittle alliance born of necessity, in danger of shattering at any moment and surely not fated to last should the company be lucky enough to reach the Western Kingdoms alive.

The Paladins: Arrival is the start of a new fantasy epic about swordplay, war, demonic magic and horrors, and, just maybe, second chances and redemption.

View all my reviews
Posted by SE Lindberg at 8:48 AM