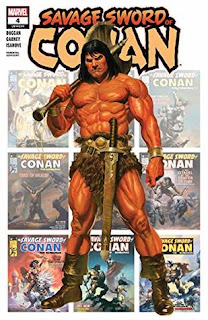 A betrayal of sorts (ambiguous to avoid spoilers) disrupts the party of Suty, Menes, and Conan while rooting through the sewers/ruins. They follow Conan's mind-map... being chased by Koga Thun's henchman.

Satisfying growth and application of character motivations demonstrated here. The story develops at a nice pace with loads of skeleton smashing. The conflict is much more clearly a Conan vs Koga Thun match rather than many previous, shallow/random battles. It ends on a decent cliff hanger that will compel readers to grab #5.

On the novelette front: Scott Oden's "The Shadow of Vengeance" focuses on Conan's meeting with bunch of pirates and mercenaries as he tries to unite/motivate the Brotherhood to create a harbor for all Free Peoples. Cimmerians lack political moxy, so this war council transpires as smoothly as a bunch of testosterone charged men resolving a controversial sports call at a pub. The hypnotized Octavia from the previous episode did not appear, and will likely confront Conan in the next episode.

View all my reviews
Posted by SE Lindberg at 3:16 PM