Rypel's Gonji Sabatake is back on stage with new tales!  The original 1980's Gonji Trilogy is great fun, a mashup of Sword & Sorcery and Godzilla-like monster movies. They were released recently, but there has been no published new Gonji for decades... until now.  And this one promises even more! 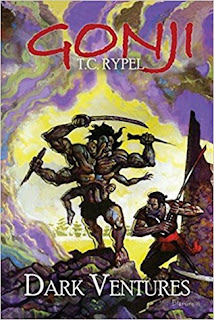 (paraphrased from the book blurb):


Hear the rallying cry for fans of the popular 1980s heroic-fantasy series. Here are two new tales of GONJI SABATAKE, the itinerant samurai-Viking warrior.. and an excerpt of another forthcoming novel! An ideal entry point for new readers.

1) The novelette "Reflections in Ice" -- picking up a mature Gonji, already well into his ca. 1600 A.D. European adventures, ensnared in a desperate crossfire between monstrous oppressors: the undead assassins of the Dark Company; and mysterious horrors residing in remote caves of the snowbound Pyrenees…

2) The novella "Dark Venture" -- the most intense, action-packed and classic-pulp-worthy Gonji tale in the canon. The first-ever story of "young Gonji," in dishonored exile from his native land. Now facing deadly peril during a bizarre and ghastly sea voyage; caught in the clutches of a hell where corrupted spells of evil magic go to die…


3) A generous preview of the coming new forthcoming Gonji novel "Born of Flame and Steel": the audacious origin tale of Gonji’s world.

The initial Zebra books of the 1980’s essential split one long novel into a trilogy (I suspect the split was arbitrary). T.C. Rypel’s 1980 series has been released in a more complete forms (more books, eBooks, audiobooks). The newer releases from Borgo Press seem to have maintained this split.