The Gonji Deathwind trilogy was really one book cut into three parts. Take home message: if you decide to follow Gonji, just plan on reading the whole trilogy. This review combines my first two reviews with additional commentary.

Gongi Is A Unique, Entertaining Mashup: Gongi is a wandering, displaced warrior--a Ronin (master-less samurai) roaming 16th century Europe. This is not historical fiction, however. This is Sword & Sorcery in vein of R.E. Howard’s Conan…but it is a solidly unique take on the genre. Firstly, Gonji is a cross-breed of a Japanese warlord and Viking sword-maiden; rather than the Hyperborean continent of REH, Gonji explores a realistic version of Europe’s geography (Ottoman–Habsburg times). Plenty of creatures and magic infuse compelling fight scenes. I half expected Godzilla to emerge on multiple occasions!

Gonji is a mysterious, intelligent character. familiar with many languages (Japanese, Spanish, Italian, German, English, more?) sufficiently to converse with anyone. He is a bit moody too, which is ostensibly related to his mixed heritage (disciplined father, wild mother). His allegiances are difficult to predict, sometimes joining mercenary bands, sometimes rescuing weak townspeople. Generally, the blend of cultures and Gonji’s mysterious motivations are engaging.

By the end of this first installment, we know only that he is seeking the “Deathwind,” and we know he gets closer to this goal when he reached the city of Vedun, but otherwise the core of his quest is unclear. There is parallel conflict with some apparently evil occupiers of Vedun; but their motives are not clear by the end either, at times brutally dominating folk and at times letting them live in peace. I would have enjoyed a bit more clarification; the demarcation between the first and second book may just be due to the publication history.

I enjoyed Part-1 (Red Blade From the East) but was left wondering about character motivations; also my mind struggled to contain a geographic scope that seemed to only grow. The second installment pleasantly explored all the characters and mysteries posited in the first; geographically, it focused on one location essentially (Vedun city and the adjacent Castle Lenska). It delivered on every aspect I hoped, and the conflict/story leapt forward every chapter; it unveiled truths behind several key secrets & motivations behind the characters, and ramped up the adventure (which was at a high level anyway). Great adventure fantasy that is more dark & pulpy than it is historical. I like the content in #1 more after reading #2, and I can’t see how any reader could not stop without tackling #3.

Gonji: Deathwind of Vedun: The Deathwind Triology, Book Three concludes the original trilogy. The first half focuses on Vedun city’s plight (which has lots of battle but is less interesting since it deals with secondary characters; select vignettes like Hildegarde's story amplify Gonji's character); the latter half focuses on the primary characters battling in Castle Lenska--which was exhilarating. The milieu allows for subtle steampunk warfare (i.e., with Paille’s coffin-cupolas, and a measured level of gunpowder mayhem); it also allows for demons, giants, and werewolves. I would like to have learned more about Akryllon's history and Gonji's motivation for seeking the "Deathwind"; enough was revealed to tell a good story while luring me into the future installments (see below list). Rypel excels with his description of demons and monsters like the Hell-Hounds and the unveiling of the mysterious multi-personality disorder of King Klann (that's not a spoiler as much as a teaser comment); here is an example:


"It looked like a gaping hole in the space above the ward, yet shaped like something reptilian. And its eyes—that horrible yellowish glare that suggested eyes—seemed to see everywhere at once, to burn into the soul of the watcher with ghastly promise of lost eternity. In its wake it carried...dancing things, whirling and lashing about in tormented rhythm. Lost souls, grasping for a new purchase in the world of men that always seemed close, yet ever out of their reach."

Series: The initial Zebra books of the 1980’s essential split one long novel into a trilogy (I suspect the split was arbitrary). T.C. Rypel’s 1980 series has been released in a more complete forms (more books, eBooks, audiobooks). The newer releases from Borgo Press seem to have maintained this split. I’ll need to read the second and third books to confirm that, and I plan to do that. Actually, Rypel has a lot more Gonji in mind, and has books 4 and 5 available now. Books 1-3 are the original trilogy:
1) Gonji: Red Blade from the East: The Deathwind Trilogy, Book One
2) Gonji: The Soul Within the Steel
3) Gonji: Deathwind of Vedun: The Deathwind Triology, Book Three
4) Gonji: Fortress of Lost Worlds
5) Gonji: A Hungering of Wolves
6)... (7) ....(8)
2016 and beyond UPDATE: DARK VENTURES, from Wildside Press due out late 2016, and according to the author, "It comprises two new novellas, my essay on the series' creation/production history, and a generous excerpt from the coming Gonji origin novel, BORN OF FLAME AND STEEL." And [Rypel] just agreed to a commission to write a NEW Gonji short story for an anthology scheduled for next summer (2017).

Social Media, Cover Art, and Maps: T.C. Rypel is very accessible via Facebook(Gonji Page) and the Goodreads Sword and Sorcery Group. If you check those websites you can (a) communicate with him and (b) just read/learn fascinating tidbits. For instance, from these I learned the artwork of Serbian illustrator Dusan Kostic graces most of the new releases, which seem more appropriate than the 1980’s covers that seem to mirror the James Clavell books (contemporary for 1980’s works, but of different genre). Also, The Kindle editions of the Deathwind Trilogy books do not include artist Joseph Rutt's Maps that appear in the front of the print editions. 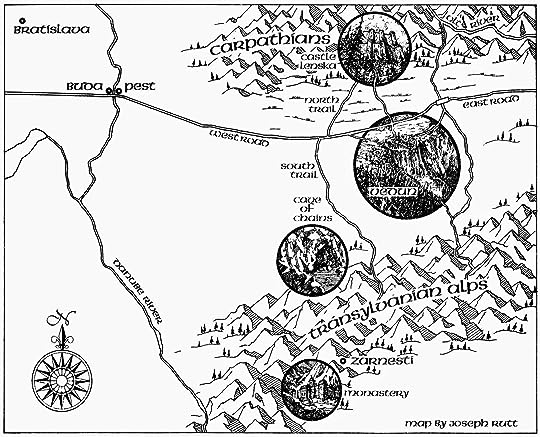 
View all my reviews
Posted by SE Lindberg at 6:39 PM