The Eternally Difficult (but Fascinating) Writers  (that was the topic, not a characterization of the panelists :)   )

Abstract: The writers who will never be popular but who will never fade away. It has been suggested that at least one person a year will read David Lindsay’s A Voyage to Arcturus with great fascination from now until the end of time. But he will never be popular. Clark Ashton Smith’s prose style repels some and enchants others, but we know he will never sell millions of copies. We don’t mean just neglected writers. What about the “difficult” writers? Does James Joyce’s Finnegans Wake (a dream fantasy of sorts) fall into this category? What is the place for difficult prose styles or ideas which can only reach the few and never the many?

The panel was thoroughly well-read and well recognized.  Kathleen Ann Goonan has been nominated for the Nebula Award and author of NY Times Best Seller (Queen City Jazz), and won a John Campbell Memorial Award for Science Fiction. Gary Wolfe  has been reviewing speculative fiction for decades including for Locus magazine (since 1991) and even the Chicago Tribune. Janeen Webb hails from Australia known for her contribution to Dreaming Down Under (1999 WFC award winner for anthologies), and several Sinbad novels ~2000-2003 . Lastly, Robert S. Knowlton (aka Bob Hadji, Robert S. Hadji) editor of Borderlands and author and critic of various weird/horror fiction since the 1970's.

Framing the discussion was Brian McNaughton's Throne of Bones (a WFC 1998 award winner). This enabled us to discuss controlling the information flow (and distance from clarity) to a reader via (a) dense prose, (b) auxiliary material maps (or lack of them), (c) increasing accessibility via the spoken spoken word (and audio books), and a litany of authors/books identified as cryptic yet fun:

A Challenge from Darrell Schweitzer, program coordinator: Have you Read James Joyce's Finnegans Wake? How can you prove that?

Favorite unscripted moment: Janeen Webb recited, from memory, the beginning to E R Eddison's Mistress of Mistresses. Her voice and tenor were beautiful and it sounded like a blend of poetry and song. Her point being that many of these works are more easily understood, and enjoyed, if read aloud. 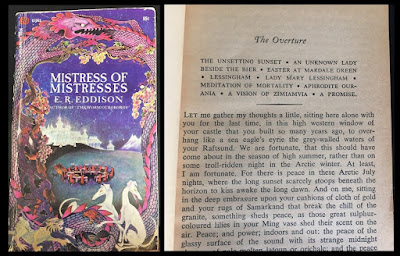