Abstract: We can think of numerous examples of fantasy writers (novelists or short story writers) who were also accomplished painters or illustrators – from Mervyn Peake to Janny Wurts. How does working in one medium affect work in the other? We hope to hear from active contemporary writer-artists on this panel, not just talk about them.


Sally Grotta moderated. She's a photographer and writer, who also has an interest in sustaining artisan skills via her American Hands project ("...an ongoing photographic study by Sally Wiener Grotta, who is creating narrative portraits of traditional artisans, such as a blacksmith, quilting bee, spinner, glass blower, weaver, tatting lacemaker, papermaker and so forth." I was captivated by her work in progress call "Dream a Little World" in which people can make the substance of their dreams tangible. Really looking forward to that being published.
Charles Vess is an accomplished illustrator known for his drawings of fae and Gaimne's Sandman. He is currently tackling ~60 works to match a Ursula Le Guin Earthsea omnibus (both trilogies). He has been hard at work drawing dragons to her approval. After the white-washing of her characters in the TV adaptation of Earthsea, in which Ursula responded publicly, Charles attempts to clarify her vision with a black Ged. 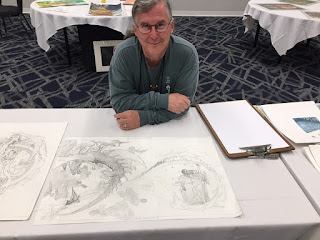 Jerome Stueart hails from nearby Dayton OH. He authored and illustrated The Angels of Our Better Beasts ( ChiZine Publications).  In the dealer's room, he drew personalized beasts for any visitor (I grabbed a Polar Bear and mysterious Fox).

"I got a lot of love from fantasy writers and fans, and people who enjoyed the little extra Beasties that I drew for them.  It really helps you connect with someone when they describe their Beast to you, and you draw their imagination to life.... you bond.  I felt like I was in Family the whole time I was there.  I met a lot of new people, reacquainted myself with relationships, and felt very welcomed there.  I couldn't ask for a better weekend or con!" - Jerome Stueart 2016 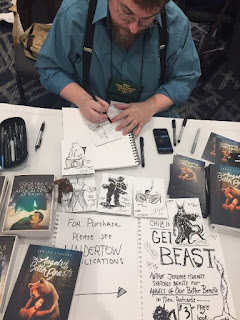 Brenda Carr recently had her story "Gret" published in the Blackguard's Blacklist companion (I had backed the kickstart for the anthology and really enjoyed it.) Gret is wonderful story tracing the origins of a witch. The narrative voice is authentic and beautifully conveys a child's view of dark reality as she is haunted & chased by evil entities (from her sorcerer ancestors to pirates). Gret's learned from her mom that 3 L's  are needed to survive: Location, Lissome tongue, and Lightning touch (thievery).  Gret will be appearing in a few works in progress. Here is a snippet:

"The day Mam died, that sodding bag of dead man's piss knocked me over my tender young pate and threw me into the orlop of a pirate ship. I'd just turned thirteen.

So there I was, cotched and away out there on blue water.

Now, that was a real bad location. No silver-tongued happiness was gonna save my cherry. A little main no more, I'd begun on the road to the witch I am.

Isk, the captain was no true Corsair. Pirates ain't. Pirates'll rut with a post if there ain't no goats aboard, and the goats breathe easy if there's girls." 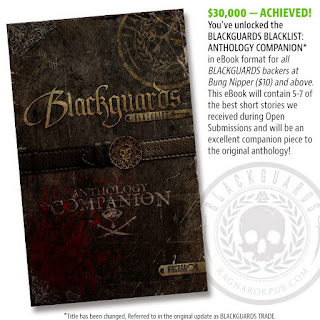