I got sucked into Diemension Game's cooperative dungeon crawler Deep Madness.  Their follow up prequel promises to be as weird (hopefully less difficult), and a very different experience. Hints of this game 's art were shown on the Deep-Madness Kickstarter. Dawn of Madness will be Kickstarted in a few months (Fall 2019): check out the preview Kickstarter page.

Byron Leavitt, the lead writer for the game, demonstrated the prototype game via the storybook  "Emily's Realm".  I learned that this game plays more like a choose-your-own-adventure book on steroids than it does a dungeon crawler. It is a co-operative nightmare in which each player has their nightmares meshed with the others. The party is guaranteed a story ending based on decision and encounters, but the ending depends on which character is affected the most during gameplay.

Instead of using lots of tiles to make a gameboard(like in Deep Madness) a single spider-web board with blank identifiers is reused; areas are identified/assigned locations based on the story (i.e., Emily's house). Time and actions are tracked with a ladder-like system (see Roman numeral track in below image with character chits).

Most appealing, is the way characters "level up"/devolve as they experience their mental issues. These even have various miniatures, so as Emily explores her past she may transform into some demon-like thing. There are several currencies that each represent mental parameters--I forget the specifics but recall one color being akin to anxiety, for instance. 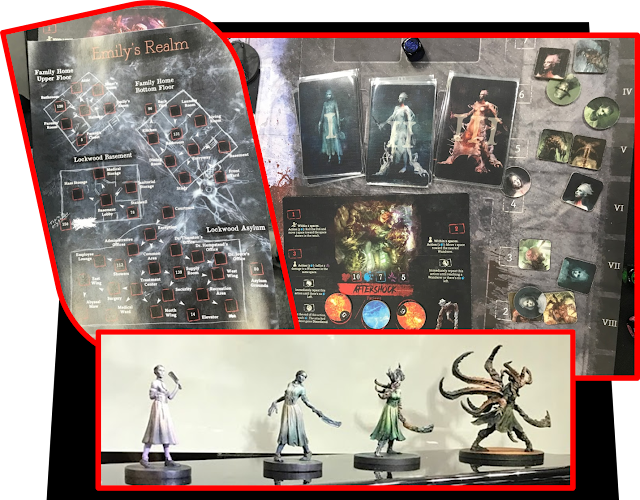 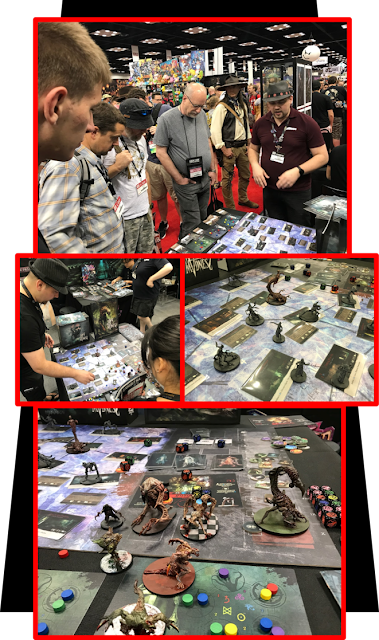 Check out our preview Kickstarter page at http://bit.ly/DoMPreview! It may be a late Dawn of Madness Friday, but we're coming back with a doozy! Here is our first video in a new series diving deep into Dawn of Madness before the Kickstarter launches in mid- to late-September, describing why Dawn of Madness is not just another board game: it is, instead, a horror experience in a board game. (Sorry for the choppy editing and the questionable quality, guys: I really wanted to get this out today, so I put it together over the course of a few hours.) More to come! #Kickstarter #boardgames #horror #survivalhorror #crowdfunding #miniatures #dawnofmadness
Posted by Diemension Games on Friday, August 9, 2019

At GenCon we listened to co-designer Michael Shinall walk through the game.

Keen-eyed readers may spot my son,