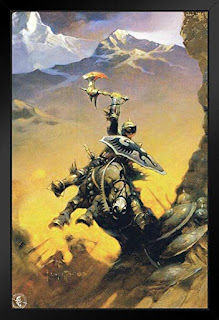 Michael Moorcock has been dishing out pulpy fantasy since the 1960's. Perhaps his most famous brand is his skein of adventures from "The" Eternal Champion--which actually refers to many heroes (Elric, Corum, Hawkmoon, Erekose, etc.) not just this book; the anti-Conan hero called Elric is arguably the most recognizable. The champion mashup is huge, although many are short stories or collections of them, the bibliography has >100 entries. Despite the huge popularity of these, there is a dearth of film/movie adaptions (however the BBC is taking on a TV version of the Runestaff/Hawkmoon stories this yr (2019).

Moorcock's books read at the same blistering pace he writes. He blends metaphysical ideas (time travel, coexisting multiverses...) with epic adventure. In just ~180pages, you'll be whisked across continents and decades of history. This can be fun, but there always seems to be a loss of realized potential and strings of inconsistency.

Cover: My paperback of The Eternal Champion from 1970 has a splendid Frank Frazetta depiction of a heavily armored knight on horse wielding an ax...under the title "Eternal Champion." The art is awesome, but Erekose has a sword (and occasionally a lance).

Sword Kanajana: Speaking of that sword, it is magical and can only be wielded by Erekose; however, it doesn't play a huge role in the book beyond that; and, late in the book when awesome weaponry of ancient days are needed, this sword is not used.... but an unnecessary/genre bending sci-fi element is introduced from out of nowhere. The climax of the book would have been awesome if Moorcock stuck to his sword (rather than his figurative "guns).

Multiverse weirdness: This serves as John Daker's initial awakening as "the Eternal Champion." Our protagonist doesn't seem to care that he is/was married. His mental struggles to come to terms with his predicament do not resonate since we get near zero information of his real life.

Love?: Several romantic relations are introduced, but are seeping with shallow masculine perspectives. I was reminded of Moorcock's stunningly misogynistic entry into the Ghor, Kin Slayer: The Saga Of Genseric's Fifth Born Son (which soured the whole collection for me).

Pacing and consistency: The first 60 out of 180 pages are a drag; for a warrior called from another world to do battle, there is surprisingly no action for the initial third. This is a strange setup for an ambitious take on war... and that theme I found enjoyable to explore (depressing to read).

Supposedly, the Humans are threatened so much that their king calls upon Erekose via sorcery to help them against the evil (sorcerer) Eldren. However, we are not shown any instance of threat or attack. This approach reinforces the idea that the threatened Humans may actually be the aggressors in the war; that's okay, but we are not shown any indication that the Eldren are even in contact with the Humans. Why would the king stoop so low to use sorcery (which he loathed)?

In short, the first third of the book really needed to show some Eldren vs Human conflict, even it was to be misinterpreted by readers, the Humans, and Erekose.

Not Cliche: Despite the execution, I do admire the idea of an Eternal Champion and the approach to blurring the lines of good-vs-evil, especially in war. Trope fantasy usually has evil wraiths/orcs vs. good human knights. I suppose the current Grimdark genre would like this tone.

View all my reviews
Posted by SE Lindberg at 9:12 AM