Ports of Shadows - review by SE 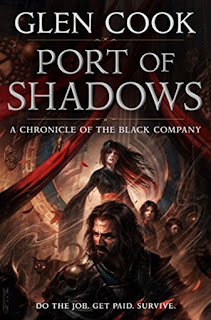 Port of Shadows by Glen Cook
SE rating: 3 of 5 stars

Port of Shadows is Fake News: This Black Company installment from Glen Cook (chronologically #1.5, but published >#10) will be enjoyed by long-term fans much more than newer folk reading the books in order. I came from reading only the first book and recommend skipping it (I am still intrigued to read Shadows Linger eventually). As part of group read in the Goodread's Sword & Sorcery group, series fans suggest reading the original trilogy first (Chronicles of the Black Company) and reaffirm that the other books are more engaging.

Some spoilers follow as I explain why Port of Shadows is alluring Fake News:
To quote the main narrator Croaker (physician and official historian of the group): "I had no idea what this ferocious campaign was all about. Well, yes, there were Rebels and Resurrectionists in need of butchering out here. Hints from the wife and kids suggested a possible connection to the Port of Shadows business, but … I could not help suspecting that something more was afoot.

The most reliable information about the late empire is not reliable at all. It, too, is consensus guesswork woven from untrustworthy fragmentary records and hand-me-down oral histories."

Alfred Hitchcock once said, "The MacGuffin is the thing that the spies are after but the audience don't care"; the titular "Port of Shadows" is not quite a MacGuffin--but it's pretty close: the mysterious "Port" is the focus of the Black Company's quest/conflict, but ample threads/arcs regarding the danger stemming from it are consistently left unexplained or shown to be not dangerous.

Ostensible conflict (excerpt): "…if the Lady had spoken truly, Tides Elba was a threat to the whole world. She could become the port through which the hideous shadow known as the Dominator could make his return. No doubt she was sought by and beloved of every Resurrectionist cultist hoping to raise the old evil from his grave. No doubt she was the prophesied messiah of darkness."

We are told (not shown) that the Port is an exposed pathway for the evil Dominator to be resurrected--yet as a reader I was never engaged. For one, the Dominator's evilness is not demonstrated, nor do the flashbacks really feature him or his behavior; secondly, the "Port" and all its possible incarnations are not really dangerous (we are told, not shown, many times that the possible Ports are causing mayhem, but the Black Company and our narrator Croaker never seem to be in any danger); and lastly, any such resurrection (i.e., use of the Port) never seems close. Nothing ever seems to be at stake.

A lack luster tale told in a confusing fashion: The tale is told via a weave of historic (long time ago) and present-day chapters. The initial 1/3rd is great, but the mysterious "Just follow my command and do a mysterious task without explanation" [given by the Lady or the Black Co Captain to Croaker] starts to fall flat thereafter. Suspicious activity from the magician One-Eye and the Taken Limper introduced in the beginning are ultimately just snippets for old time fans to relish. Although entertaining, any tension from having untrustworthy companions is not capitalized on.

Fake News: We learn lots of what is going via journalistic accounts (not direct witnessing) as characters touch base with Croaker. This makes sense since he is the Annalist, but also keeps the reader distant. The alternating shifts in time also change point of view (first person with Croaker and third person). Within one yarn, there is time travel (forward and back) in which people are transported via time.

Everyone is unreliable, either because they are mischievous, possessed/"not acting like themselves," are clones, impostors, twins, or alternative incarnations of themselves (Mischievous rain had at least three version of herself; Laissa at least two, Ankou shapeshifts, etc.). The confusion does not seem to be unfurled intentionally (i.e., in a Phillip Dick story). Instead we are given a huge swath of characters, all unreliable, most only appearing for a short time, most with multiple instances of themselves… and none of them know what is going on (see below excerpts).

I am assuming that the following stories in the series follow through and make this feel more complete, but as a standalone novel, and even as a sequel, it feels incomplete.

Excerpts (a.k.a., Fake News headlines):
The most reliable information about the late empire is not reliable at all. It, too, is consensus guesswork woven from untrustworthy fragmentary records and hand-me-down oral histories.

We’re into something unlike anything we’ve ever seen. We don’t know what it is. That’s why we keep talking and talking. I can’t even express it. It’s something that we can’t handle the way we usually do. We can’t trick it. We can’t crush it by being the nastiest killers on the field. It’s all inside. Insidious.

Nobody knows what’s going on. Anything that we think we know is almost certainly not…

"…You don’t know anything more than I do. And now I’m beginning to think that maybe even the Taken is without a clue.” Our mistress was known for playing lives-long games that only she could fathom.

The Captain deployed his ingenuous smile, neither denying nor confirming, just suggesting that he knew something that would remain a mystery to everyone else.

Nothing was what it looked like. Nothing stayed the same. Nothing went the way that it should.

Somebody keeps making us forget stuff

I had no idea what this ferocious campaign was all about. Well, yes, there were Rebels and Resurrectionists in need of butchering out here. Hints from the wife and kids suggested a possible connection to the Port of Shadows business, but … I could not help suspecting that something more was afoot.

From the Old Man down to the Third and local kid Gurdlief Speak, folks keep asking me for news they need to make sense of a time that no surviving memories make sensible.

the Black Company must have been smacked with a widespread, savage, and utterly, angrily deliberate memory assault.

None of the Senjak sisters were described accurately. None of them were identified by their correct names.

The most reliable information about the late empire is not reliable at all. It, too, is consensus guesswork woven from untrustworthy fragmentary records and hand-me-down oral histories.

View all my reviews
Posted by SE Lindberg at 11:24 AM