Terry W. Ervin II is an English and science teacher who enjoys writing fantasy and science fiction. He hails from central Ohio. His First Civilization’s Legacy Series (fantasy) includes Flank Hawk, Blood Sword, and Soul Forge. The Crax War Chronicles, his science fiction series, includes Relic Tech and Relic Hunted (his most recent release from Gryphonwood Press). In addition to writing novels, Terry’s short stories have appeared in over a dozen anthologies, magazines and ezines. Genre Shotgun is a collection containing all of his previously published short stories. You can get his work from a variety of vendors and sites (link).

Readers, and occasionally writers early in their careers, ask where I come up with ideas, because indeed, some of my ideas are out of the mainstream, even for fantasy and science fiction.

Thoughts strike me when driving and thinking, or while watching a Discovery or History Channel program on TV. Sometimes it’s the news or something I’m reading, or maybe simple curiosity on my part. Now, a lot of people have ideas and ‘what if’ questions that strike them. But a writer is someone like me that types (okay, word processes) them out, and gets them published for others to read.

My first published story “Tethered in Purgatory” originated from pondering what might happen to souls of individuals placed in cryogenic preservation. I was curious—heck, aren’t you, at least now that I brought it to your attention? So, after a research and reflection, I wrote a story that explored one possibility.

I read about and study history and follow modern politics, after a fashion. Recalling an episode of Space, Above and Beyond (a short-lived and moderately interesting series) that featured a black hole as part of its plot-line, while doing a little research on Winston Churchill, I came across one of his quotes:

From that combination of thoughts (black hole, Churchill quote, modern politics), I wrote “Seconds of Eternity” where humanity, through shortsighted leadership, is on the brink, facing its twilight. Enter Mac ‘Race’ Parson, a second line fighter pilot with his green wingman, Bronco Bob, in their antiquated Starfury IVs. What will Mac Parson risk—be willing to endure—on a long shot bid to stave off humanity’s extinction for maybe another six months?

A fantasy example? That would be where the notion for Flank Hawk originated, which became the initial novel in my First Civilization’s Legacy Series. The initial spark occurred while driving home from work. I was thinking about two books I’d recently re-read, Zelazny’s Guns of Avalon and Turtledove’s World War: In the Balance. One of the main turning points in Guns of Avalon occurs when Prince Corwin discovers a way to get gunpowder to function in the magical city of Amber. In the Balance is about an alien invasion during the height of World War II. The disparity in technology between the invaders and humanity is a major element in the novel’s conflict. Then I began to ponder, what would happen if a dragon encountered a World War II aircraft? Okay, maybe one can see how the line of thought formed. From there I began to devise a world where such an encounter could take place.

Next came the people and creatures that would inhabit the post-apocalyptic world, how it came to be, and the long-running, multi-layered power struggle that would come to influence events in the plot that I was devising. Finally, came Krish and Lilly, Roos and Road Toad—the main characters in the novel.

Relic Tech, the first novel I wrote, but not the first one published (an interesting story there, but not germane to this article), came from a combination of me thinking about socio-economic disparity, and what type of socio situation might segregate humans in the future. The notion of technology, including access to and use of it, took center stage. Also, at the time, I was presenting some literary terms and devices to my classes (I’m an English teacher). One of those concepts was a Frame Story.

From there, Relic Tech was born, with the protagonist, 4th Class Security Specialist Krakista Keesay. Being an R-Tech or Relic, Specialist Keesay uses and depends on late 20th century technology to do his job—serving as a security specialist aboard the Kalavar, an aging interstellar civil transport. With shotgun and bayonet, brass knuckles, and a chip on his shoulder, Specialist Keesay gets caught up in political and corporate intrigue, all while trying to survive an overwhelming interstellar invasion that threatens humanity’s existence. Or, better yet for Specialist Keesay, killing as many Crax as possible before they bring him down.

That brings me to my newest release, Relic Hunted, the sequel to Relic Tech, as part of my Crax War Chronicles. To the backdrop of the continuing Crax War, again meaning plenty of action, the theme of security vs. personal identity is explored.

To contact Terry or learn more about his writing endeavors, visit his website at www.ervin-author.com and his blog, Up Around the Corner at uparoundthecorner.blogspot.com 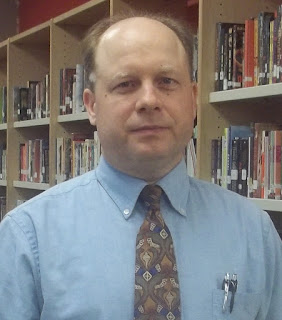