Immortal Muse - An Entertaining Blend of Art and Alchemy

**update: the author was kindly open to an interview which uncovered all sorts of splendid perspectives and fine art (link) **

Stephen Leigh’s Immortal Muse blends modern day fiction with alchemical history. As a chemist and artist, and fantasy genre fan, this was a perfect match for me. How neat would it be if your muse was not just a one-way source of inspiration? What if you muse was a person who provided feedback and even shared a symbiotic relationship with you such that your creations benefited her? What if your muse’s life was threatened by a darker counterpart?


“Yeah, artists want immortality all right, but the immortality we’re after is the kind you don’t know you achieved because you’re dead when it happens. It’s the work that’s supposed to live forever. Not the artist.”


Complementary Art & Alchemy: Prior 1600, scientists and artists had overlapping interests/skills; scientists had to draw their own data in sketchbooks; conversely, artists had to craft/prepare their own pigments and materials (via chemistry). Artists and alchemists frequented the same apothecaries. The art & science of transmuting materials was a shared goal. Alchemists codified their goal in the substance called the “philosopher’s stone,” which was either the understanding to transmute materials into anything they wanted (i.e. gold)…or the base material itself. Harnessing the power of the stone could also enable one to live forever (in which case the “stone” was called “the elixir of life”).

Artistic Philosophy: Immortal Muse is chock full of artistic perspectives and shout-outs. I was thrilled for the mentioning my favorite artisanal recipe book : Mappae Clavicula: A Little Key to the World of Medieval Techniques. There is a somber but nicely executed arc regarding the persecution of Jews, beginning with the ~1394 Jewish migration from Paris and ending with Charlotte Salomon’s tragic plight during the Holocaust. There are plenty of moments like the quote below in which an artist is caught between following their muse (and creating something to be shared) and lacking the trust of the audience to care or judge them (or having their art taken away).

“Ana let the pages of the sketchpad fall back and handed it to [Charlotte]. She pressed it to her chest as if she’d never expected to have it returned.”


Author Stephen Leigh: The writer taps his own artistic experience for this. As a musician and creative writer, who also practices Aikido, it is obvious that he funneled a lot of his own muses in this. I half wonder if there is a bar called the Bent Calloipe in Cincinnati which he plays his guitar. I'll have to track him down for an interview (I was able to catch his book signing in 2014).  His Immortal Muse is recommended for historical fiction, art philosophy, alchemy buffs, and fantasy enthusiasts. 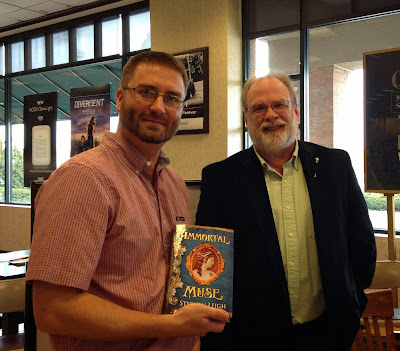 View all my reviews
Posted by SE Lindberg at 11:13 AM