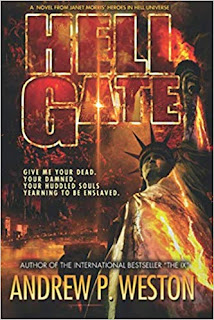 Who “was” the Grim Reaper before becoming Satan’s strongest champion? This series chronicles the exploits of Satan’s right-hand warrior, Daemon Grim (the reaper). It began with Hell Bound and Hell Hounds … and continues with Hell Gate. In addition to my reviews of those, I capture some key
takeaways:

Hell Noir Style: The milieu and conflict are so epic in scope, and weird in substance, that the story lends itself more for narrative storytelling over dramatic showing. As before, Mr. Weston doles out exposition-through-dialogue; as I read this, I just envisioned a Noir film in which the protagonist provided a snarky voiceover. I felt like I was called into Grim's police office and sat in a room full of smoke as he coached me through a mysterious case.

What is Hell’s Milieu? Grim was introduced to the Heroes in Hell series in the anthology Doctors in Hell. Heroes in Hell is a fantastical place built from myths and religions—so do not expect Tolkienesque elves or dwarves. The primary realm explored is called Juxtapose, which is a satirical mirror of our earth’s cityscapes (the Seine river featured as “Inseine”, Paris called Perish, the Eiffel Tower represented as the Awful Tower, Facebook is called Hatebook). Since time has little meaning in Hell, beings from past and present meet and scheme (i.e., Tesla and Chopin). There are other realms beyond Juxtapose connected with ethereal gateways. All are populated by beings being tormented and try to outwit Satan or their comrades. Even Erra, the Akkadian plague god, has visited Hell to torment Satan. No one is safe! It is a splendid, wacky place that works well.

Where to Start on your trip to Hell: Hell Gate is wacky and fun, but is not the beginning. The Heroes in Hell is primarily a series of anthologies; this novel focuses on Grim but has story arcs connected to HIH. Given the breadth of abstract interactions, I recommend initial readers begin with either:

View all my reviews
Posted by SE Lindberg at 6:15 PM