Conan the Barbarian #6 - review by SE 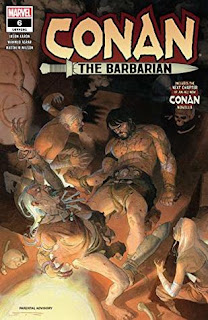 Conan The Barbarian (2019-) #6 repeats a formula to deliver a forgettable tale.

The sixth installment of Jason Aaron could be worthy of four stars it wasn't part of a series, but it's preceding episodes have already exhausted this approach. Here Conan is in Turan, near Stygia (the series has Conan hopping around Hyboria). It tracks the fast rise of Conan from mercenary to commander.

The interior art by Mahmud Asrar continues to be great, especially a blood-drenched Conan panel. The cover hints at more Crimson Witch and the spooky children (yes, it's about time), but we are treated with the same formula as the last four (Conan goes on random missions in new territories, doing random things to random people, while the real antagonists appear on the last panel in some shallow cliffhanger--blatantly reminding us of what is shown in the first comic).

Otherwise, the story is not special. There was an opportunity to show the rise & deterioration of Conan's relationship with King Yezdigerd--who is apparently the one responsible to help Conan become a "great" army commander. Yet we are only shown the start of that pairing and told [literally, in a script box] that it ironically falls apart. So, I'll be sure to forget the King's name as surely as the other great commander's in this story. I just didn't feel the conflict here. It felt like it was just checking boxes.

Would have loved to see more Sorcery too. This issue is all Swords.

Unfortunately, John C Hocking's "Black Starlight" novelette deviated from a developing story and seemed to reboot with a new, meandering & unclear side-mission. Conan and Zelandra really seem to float around. I wasn't even sure I knew their mission before, but there was a hint that it had to do with something with the Emerald Lotus. There are only 6 parts left of this 12-chapter story.

As noted in my other reviews of Conan the Barbarian, I really liked the premise and story of the first issue (Conan The Barbarian (2019-) #1). But I'm expecting something a little more by issue #6. I'd be happier if the crimson antagonists subtly haunted Conan throughout the panels leading up their explicit appearance at the end. Without that, or something similar, the promises of issue one are deflated again.

View all my reviews