Conan The Barbarian #4 - Review by SE 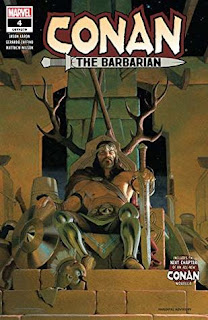 Really enjoyed this, however there are some incongruities. The artist differs from the previous three installments, and although the story-arc continues with Conan aging into an old man... it does not explicitly or implicitly mention the Crimson Witch. So that is strange.

It is very well done filler. Given that Marvel's reboot of Conan is all over the map (and time) with three comic series released together in 2019, and each apparently with serialized novellas (decoupled from the comics they are printed with), one can argue that readers didn't need any more jarring. I'm curious if the next issue can connect all the dots.

That said, Conan The Barbarian (2019-) #4 captured the "barbarian vs civilization" conflict that Conan deals with remarkably well. Conan strangles the king of Aquilonia (called Namedides instead of Numedides, as per REH canon from the 1932 "The Phoenix on the Sword" story.) Then he assumes the boring role of king without a war.

The art is gritty and mesmerizing. Instead of a shallow sidekick, he bonds with an captive lion--which seems much more appropriate and genuine. As a king, he needs to conceal his identity as he delivers vigilantly justice on the streets at night to regain his mental strength (must satiate the inner barbarian). Conan seems to re-purpose one of his old pirate flags into a mask, which made sense to me but some say it looks too detailed and anachronistic (like a "biker's mask"). I liked the idea.

Part #4 of Black Starlight by John C. Hocking starts to gel and get dark. Conan and his party are on Stygian shores and zombies had attacked them. The role of the emerald lotus grows clearer, and the conflict with a ghostly entity escalates. Looking forward to #5.

View all my reviews
Posted by SE Lindberg at 4:17 PM