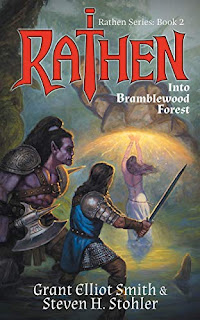 Grant Elliot Smith delivers another intense literary-Role Playing Game (lit-RPG) inspired adventure with Rathen: Into Bramblewood Forest; here he continues his Rathen series with co-author Steven H. Stohler. This sequel can easily be enjoyed as a standalone adventure. Whichever one you read, you’ll be excited to read the other.

My review of the predecessor, Rathen: The Legend of Ghrakus Castle holds true for this sequel; both are fun reads, having captain Rathen lead ~a dozen adventurers; as in the first book, the first 50% is the party gathering while they travel; the latter half delivering the real conflict.

Bramblewood unfolds super-fast and is surprisingly easy to read given the number of featured characters (~11 in the main party and ~4 antagonists--all of them have backstories and motivations). Presenting at a pleasant pace and delivering intense action while offering character depth is a testimony to the authors’ ability to unfurl balanced storytelling. The authors must be meticulous dungeon masters.

Adding a Lich to the party, and ensuring he had a central role in the plot to obtain the Book of Ziz, really provided a unique take on the typical RPG party. Listen below is Rathen’s party, each member you’ll get to know and route for:


Keeping it from a 5-star is the same melodrama that makes the tale enjoyable. There are instances of fast healing that deflate consequences of battle, but still reflect lit-RPG expectations; many subplots come across as artificial (i.e., including a few romantic relationships, and escape scenes) that develop fun tension but approach feeling forced.

Cover Art by Stawicki and Future Rathen: Longtime fantasy illustrator Matthew Stawicki provided another great cover. He has illustrated many in his career for Dragon Lance, Monte Cook Games, Milton-Bradley, Hasbro, Wizards of the Coast, Vivendi Games, and others.

I am committed to the third episode in the works, pitched as “The Battle for Korganis.”
Combing Stawicki’s website, it is touch to overlook a stunning related work which I hope/speculate reveals the next adventure, artwork called “Rathen’s Descent.”


View all my reviews
Posted by SE Lindberg at 2:30 PM