The Book of Paradox by Louise Cooper -

The Book of Paradox by Louise Cooper
S.E rating: 4 of 5 stars

The Book of Paradox by Louise Cooper


Aloethe’s life is taken by a jealous prince; Aloethe’s love, Varka, serves as a scapegoat to the murder. Sentenced to sacrifice at the temple of the Darxes, Lord of the Underworld, Varka awakens and is encouraged to find Aloethe in Limbo … if he can find the place. Varka is also empowered with the Book of Paradox, a magical book with pages/verses are cryptic, dynamic, and crucial to understand.


“You are indeed a thing of paradox,”[Varka] muttered under his breath, addressing the Book. “When I need you most, you tell me nothing, and when you are useful your words are impossible to understand.”


The actual Book of Paradox has 22 chapters, each named/influenced by the Major Arcana of the Tarot. A forward by the author’s first husband Gary Cooper explains the design: “The Book of Paradox represents the journey of the Fool through the initiations of the various cards. This is Varka’s fated quest, and one which leads him and the reader through many strange lands, into contact with many strange people, as will the Tarot itself.”

Louise Cooper was only twenty years old when her debut novel came out, and she was graced with a breath-taking Frank Frazetta cover (called “Paradox”). Each chapter has a frontispiece with an illustration by Barbara Nessim of the card influence in the current chapter along with a paragraph explaining the interpretation. Many mini-stories span 2-to-3 cards/chapters; for instance, the cover of Varka approaching vampire women is a scene from a story spanning (a) Chapters VII: The Chariot (Reversed) and (b) VIII: Fortitude. 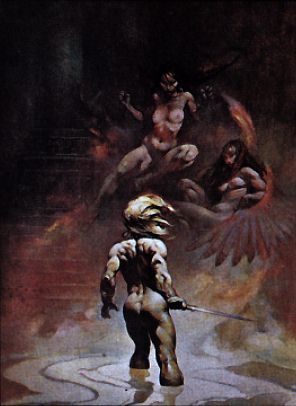 This is a trippy adventure into an underworld that is more dream-like than it is horrifying. It is short and reads fast. The pacing and style is reminiscent of Michael Moorcock (known for his Elric novels) and there are some echoes of Jack Vance (1926-2013) and his Dying Earth series--iconic in RPG/D&D history since the naming of Items and Spells was simple: Magic Items such as Expansible Egg, Scintillant Dagger, and Live Boots...and Spells such as Excellent Prismatic Spray, Phandaal's Mantle of Stealth, Call to the Violent Cloud, Charm of Untiring Nourishment. There is an echo of Vance flare here, in that Louise Cooper offers location and titles similarly: Castle Without parallel, Queen of Blue, the Cave of Souls Passing, and the titular Book of Paradox.

The Tarot design is interesting but not obviously crucial/integral for the story; i.e., the Book of Paradox carried by Varka begged for a stronger connection to the Tarot cards, but the connection, if any, was not obvious. Nonetheless, it is a fun tale. Louise seems better known for her Time Master and Indigo series, which I plan to read.
The Initiate and Nemesis

View all my reviews
Posted by SE Lindberg at 3:27 PM