Please join the Sword & Sorcery group this Nov-Dec to read:
1) The Broken Sword - 1954 by Poul Anderson
2) High Couch of Silistra - 1997 and 2015 by Janet Morris
Of course, we always must have a custom banner made from the covers.  Here are the credits for the montage:
Poul Anderson's The Broken Sword:1973 Patrick Woodroffe and 1977 Boris Vallejo 1977 (coincidentally)

The Author's Cut versions were just released this year. It is interesting to learn of Janet E. Morris's feelings toward the original cover by Boris Vallejo. I interviewed her in 2014 and she said:


"When I saw the Boris High Couch cover for the first time, I was insulted that anyone could have derived the brass bra and Gucci boots image from my work.- JEM 2014


For the 2015 authors' cut, designer/artist Roy Mauritsen took one photo and plit it over the four covers ("Dancing Maenad in a Roman relief" photo by Ana Belén Cantero Paz) 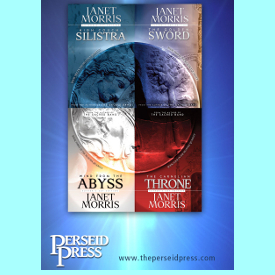