The last several years I head to Norman Oklahoma to attend the annual Institute for Applied Surfactant Research (IASR) meeting. What else is in Norman? My friend and author Tom Barczak, a fellow Perseid Press contributor with a poetic, dark style.  Barczak is an artist & architect who has a beautiful ability to capture angelic warfare with drawing pencil and keyboard.

Before the seminars started, I squeezed in another Starbuck's meeting.  This time I got a glimpse into Tom's sketches for his Hands of the Dragon book...and  was allowed to share a bit with you (see below)!  And what out! I think creepy surfactant assemblies are inspiring him!


The notes read: "A suitable sacrifice .... A cenotaph of blood..."
[click to expand image]

Eh gad, is that a micelle?

Of course my mind is focused on surfactants, and what do I see has Tom's notebook? A micelle? That's a spherical assembly of soap molecules, a key technology for detergency. Well he claims his sketch is his visualization of an epic assembly of people as they execute a divine ritual.  Anyway, I adore micelle formations, having illustrated them for Prof. Steven Abbott's Surfactant Science: Principles and Practice ... with the app Practical Surfactants (available for free).  But they also creepy me out (surfactants can form some scary "living" structures, such as myelins).

So the moral of this story is:

Obey your muse... and be wary of self-assembled structures!

Posted by SE Lindberg at 9:15 AM Links to this post 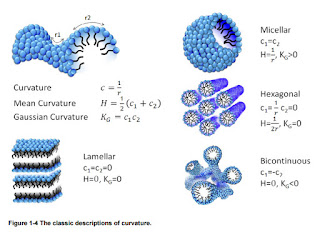 His knack for making web-based, interactive models is well-established, especially for coatings, adhesives, and solubility issues. More recently, he has created a package for understanding surfactants/detergents, available online - Practical Surfactants site and now in a Practical Surfactants- Free eBook.  I was thrilled to be able to provide some illustrations for the eBook (i.e. for surfactant curvature) as well as co-developing the Phase Diagram tab which includes some awesome sub-tabs: 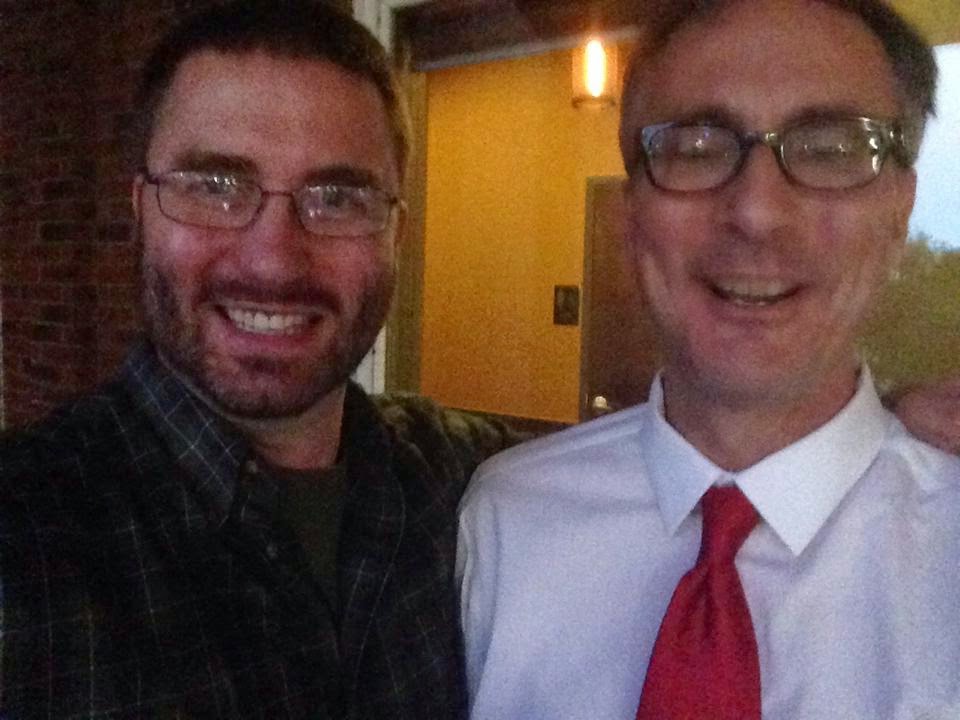 Talking art, books, and synesthesia with illustrator and artist of Viel of the Dragon

Tom has a wonderful illustrated, poetic series that begins with
Veil of the Dragon (reviewed May 2014). He is just now releasing an audio book voiced by Neil Hellegers. Check out the below video trailer.  If you like dark, poetic fantasy, you'll enjoy this.

Posted by SE Lindberg at 7:28 AM Links to this post

Always on the lookout for spooky textures detected with a microscope or revealed in my kids' drawings, I have been enthralled and terrified to watch soap dissolve.  To be scared like me, you'll need to read lots of Lovecraftian horror stories...then use a microscope to monitor soap hydration.  Obviously, there are limited folks who'll fit that call to order, so below may suffice:

﻿
Fran Rosevear (1912-2010) was a Procter & Gamble phase chemist and microscopist who authored seminal papers of PLM for characterizing surfactants (soap) as they hydrate (get wet).  The tentacle like structures in the "Neat" phase are bilayer tubes (see images).  If you watch water enter dry soap, you can witness these structures form; Rosevear called the analogous, equilibrated structure "oily streaks".


Myelins are flexible crystals, laminated tubes of the same oily streak structure described by Rosevear.  Watching them be born is a real hoot.  They emerge like wiggling snakes as water works it's way into concetrated surfactant.﻿﻿

1) Rosevear, F. (1968). "Liquid Crystals: The Mesomorphic Phases of Surfactant Compositions." J. Soc. Cosmetic Chemists 19: 581-594.
2) Rosevear, F. (1954). "The Microscopy of the Liquid Crystalline Neat and Middle Phases of Soaps and Synthetic Detergents." Journal of the American Oil Chemists' Society 31: 628-639
﻿Here are some myelins I witnessed form using Differential Interferrence Contrast  microscopy (a form of PLM).  Do these not scream "Lovecraft dreamed me into existence"?  The myelins look like swelling brain matter.  If I did not know better, I might claim they were sentient worms instead.

Mike Cates of the University of Edinburgh and collaborators have been studying myelin formation and have some more compelling images.  This image was shared by Louisa Reissig's presentation: Myelin Formation during the Dissolution of Lamellar Phase @ the 81st ACS Colloid & Surface Science Symposium (June 24-27, 2007), Newark, DE.

Okay, so I worked visions of evil tentacles into the Lords of Dyscrasia Book trailer (another post). This is the second video featured in the trailer:

These structures (and the horrors they evoke) are also affecting my creature design for my sequel to Lords of Dyscrasia.  Below, I share imagery my son drew up for me:
Connor's tentacled monsters - (created ~2010) 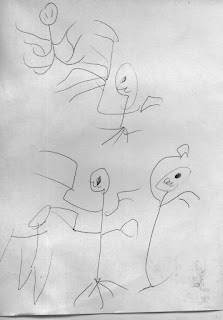 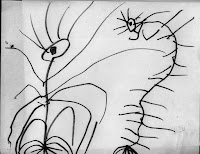 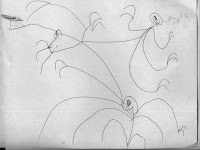 Yes, I have been known to ask my kids to contribute to the creative process.  For completeness sake, I share some my daughter dreamed up a few years ago: 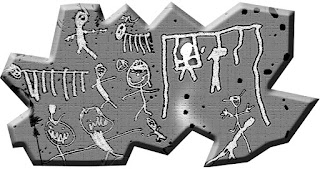 Posted by SE Lindberg at 4:47 PM Links to this post