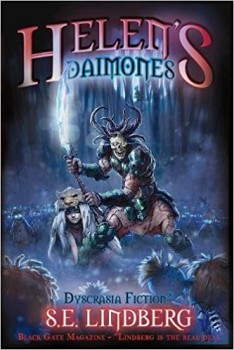 Fletcher Vredenburgh from Black Gate reviews Helen's Daimones (Link to review) .
Feeling honored. Some quotes from review:
"Helen is one of the stranger heroes to feature in swords & sorcery. Is she delusional, mad, gifted? I was never quite sure — she is only a little girl — but I was never able to take my eyes off her. With a cast as strange as this novel has, Helen remains the focus throughout. Even when she’s off stage, the question of what she is doing always seems to rise to the fore."


"Too much of what’s called grimdark is little more than sex and gore splashed over a standard epic fantasy story. True horror — and at its heart, Helen’s Daimones is a horror story — unsettles, disorients, and makes you feel like the world will fall out from under your feet at any moment. Lindberg’s novel does all those things."

"There are strange territories in the wilds of swords & sorcery that have been visited successfully by only a handful of writers. They are places where, aside from some actual swords and sorcery, few of the common trappings of the genre are found. Magic may be phatasmagorical, the world — both physically and culturally — has no echoes of our own, and the hero is more likely to be a golem, a resurrected nobleman, or a little girl than an axe-swinging warrior.

Some of C.L. Moore’s Jirel stories and most of Clark Ashton Smith’s oeuvre mapped portions of these realms. In Throne of Bones, Brian McNaughton brought back a detailed study of one nation. Michael Shea and Darrell Schweitzer mapped whole continents. They’re dangerous places, permeated by darkness and decay, and the scent of death is rarely absent from the thick, curdled air.

S.E. Lindberg’s short novel, Helen’s Daimones (2017), is one such tale of this diseased stretch of the world of swords & sorcery. I can’t say this book quite attains the same heights as Shea’s Nifft the Lean or Schweitzer’s The Mask of the Sorcerer, but much of the time it comes tantalizingly close."

Thanks to Joe Bonadonna for the opportunity to be grilled by Dorgo’s Dozen questions. Phew, this will be intense! One cannot lie to a detective as keen as Dorgo, especially when his dowsing rod can sense minor indiscretions — I just hope he can differentiate between fantasy and reality. So please read on, as I attempt to pass the interrogation.

Click on the link and learn about lots of hellish things, from the meaning of Dyscrasia and all things-beautiful-in-horror. 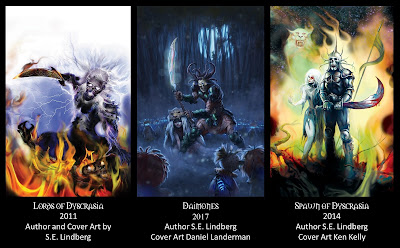 Posted by SE Lindberg at 3:43 PM Links to this post

2010: I discovered the Black Gate print magazine by attending a panel at the 2010 World Fantasy Convention and listening to Howard Andrew Jones advocate for the adventure-fiction magazine. I subscribed immediately and got #15, the last print issue. The website for Black Gate (led by John O'Neill) has persisted and remains an outstanding resource for book reviews & perspectives on contemporary and historic dark fantasy.

2015: Author Joe Bonadonna reviewed Lords of Dyscrasia on Black Gate, which was a milestone for me. Authors thrive on recognition and visibility. I adore Joe's weird fiction and Black Gate, so getting acknowledged there, by Joe, was awesome. Scroll down for an excerpt. 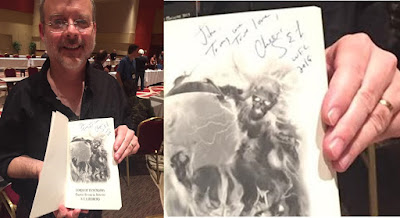 “It's not silly. Years ago my wife Alice asked why Catherynne Valente had autographed a book to me with "To My One True Love" (because she'd asked me what she should write, and that was the first thing that came to mind). I hastily told Alice, "Oh, that's just how everybody signs autographs these days."And so, for the last 15 years I've been begging writers to sign books with "To my one True Love, John."  I have hundreds of them, which I strategically leave open around our house. Oh what a tangled web we weave.... 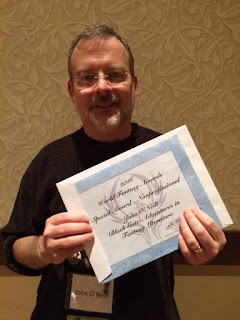 Seeking Revenge Against the Shades of the Dead: S.E. Lindberg’s Lords of Dyscrasia

"S.E. Lindberg is an original voice in fantasy. His prose is lush and colorful, and his style leans toward that of classic literature, without being stilted, self-conscious or pretentious. He has a gift for putting words “down on paper” and constructing sentences that flow with a poetic nuance.

Lords of Dyscrasia (an abnormal or disordered state of the body or of a bodily part) is touted as “Graphic Sword and Sorcery,” but to me it has more in common with the dark fantasy of Clark Ashton Smith and the gothic tones of Mervyn Peake’s first two Gormenghast books. There is some nice Lovecraftian shading to this novel, as well, with a touch of Edgar Allen Poe to lend it a feverishness of tone, and even a psychedelic flavor in style.

While Lindberg channels his influences with a deft hand, he has mapped out a beautifully grotesque world that is truly his own unique creation. This book was described to me as being part of the Grimdark subgenre of dark fantasy, and it is indeed a grim, dark tale.

Lindberg’s “dyscrasia” is a really nasty plague — a disease of the blood that has infected the insectoid and avian elder lords of the Underworld. The disease also affects pregnant human women, who give birth to mutants — hybrids of human and elders — if they don’t die during pregnancy, that is..."

Posted by SE Lindberg at 12:20 PM Links to this post

Some snippets from Black Gate's post on Sunday, May 24th, 2015 | Posted by author Joe Bonadonna, entitled Seeking Revenge Against the Shades of the Dead: S.E. Lindberg’s Lords of Dyscrasia:

"S.E. Lindberg is an original voice in fantasy. His prose is lush and colorful, and his style leans toward that of classic literature, without being stilted, self-conscious or pretentious....

...this is a complex and well-written novel, very difficult to describe. The settings and the atmosphere are rich in color and texture, and story’s pace is almost relentless: it rushes along like a bullet train, with very few stops along the way. Although Lysis Endeken is the main character, it is the weird and wonderful Doctor Grave who really rises above all others.

...a wondrous reading experience. I believe this is Lindberg’s first novel, and it’s an impressive one. He knows what he’s doing, and I have a feeling that he’s grown as a writer, and has mastered the art of pace, dialogue and character since this book was published four years ago.

...Lindberg is the real deal, a gifted writer with a strong command of language, and a soaring talent that stretches beyond the verbal: he illustrates his novel with his own wild and weird and excellent drawings. If you like action-packed dark fantasy with bizarre settings, an original premise and clever twist, then add this one to your Must Read List."

Seeking Revenge Against the Shades of the Dead: S.E. Lindberg’s Lords of Dyscrasia

Posted by SE Lindberg at 3:28 PM Links to this post