Bookend Chronicles consistently weaves thoughtful context with excerpts to provide helpful reviews.  It just posted its comprehensive review of Bookend Chronicles: Lords Of Dyscrasia (Link).  I copy/paste the text below since it should help potential readers decide if they want to tour the Underworld:

For years, the movie industry has inundated us with some of the most graphic, disturbing, horror-laden tales of terror on the silver screen. It would be quite a rare occasion for a story to cause a deep stir in a desensitized mind. But once in a while, a story is constructed that motivates the mind and gets the wheels once again turning in anticipation.

Such is the Lords Of Dyscrasia by S.E. Lindberg.

Lindberg depicts an intensely savage and volatile world within the pages of Dyscrasia. It is a persistent plague that invades the blood and changes the human genome forever. Doctor Grave desperately seeks to save the long bloodline of his sick queen.

"The lifeless embryos exhibit the disease explicitly. The stillborn mutants present eldritch traits, all unique and terrible. Beaks and downy feathers adorn the avian ones. Translucent, soft-shell exoskeletons wrap the invertebrate insectan type, which are always infected with worms."

The disease has sunken into every crevice of daily life. It is no longer an aberrant anomaly, it has become an accepted form of life. Yet there is an unspoken hope that still exists.

"Anyone who could conquer this disease, which is rooted in the fabric of the Land, must be likewise terrible. Perhaps there will be a hero, a warrior who will vanquish dyscrasia, only to usher unforeseen horrors into this world—horrors that will make us all suffer so much we will wish dyscrasia to return…"

Endenken, the leader of a dying culture, wrestles with his own personal demons. Expected to abide by the traditional rules of his people, he must make difficult decisions in a world strife with the disease. His decision will mark the beginning of an end.

"Their blood was sacred. They had few left to carry it. And it was Endenken’s turn to inherit the burden... And the masked grotesqueries swarmed him now, their human frames transfigured by ornate markings and hollow eldritch skeletons."

The gruesome tale continues and illuminates the struggle within the bonds of humanity. An edict of the soul resounds throughout the pages of this nightmarish other-world with spots of dark humor. Lindberg has created an alternate reality that forces the reader to expand the limitations of their imagination.

We must further open our own minds and perhaps even edify our own traditional definitions of religion, belief, and faith.

The illustrations contained are morbid works of art, continuing to tell an epic that is both compelling and fascinating. Even the cover provides a sense of expectancy.

S.E. Lindberg lives near Cincinnati, Ohio. He works as a microscopist, and has spent two decades practicing chemistry.

Posted by SE Lindberg at 5:45 PM Links to this post

Email ThisBlogThis!Share to TwitterShare to FacebookShare to Pinterest
Labels: Reviews

This exercise made me realize that I had missed seeing Roger Corman's 1980's Cult Classics movies: DeathStalker I,II,II, IV, the Barbarian Queen I,II, and the Warrior and the Sorceress (there are even more, most merely recycle footage). Amazon has a collection deal, in which I can get 4 of those.  Would it be worth my time/money (6hrs/$18USD) to complete this gaping hole in my life? How essential are these B-movies toward developing a well-rounded S&S groupie? I have since ordered the movies...and will be watching them soon...more on that below.

Therapy: I had turned to the Sword and Sorcery group on Goodreads for some biased advice.  There author Bruce Durham directed me toward a great website that details what elements Sword & Sorcery movies are expected to have, and has a great list of movies listed by release date.  To see the trends over time I graphed a histogram: 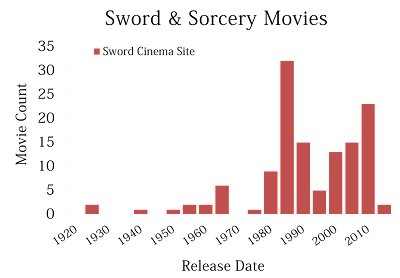 Trends: The trickle of movies in 1960's and 1970's was notably composed of Ray Harryhausen's classic clay-mation masterpieces (Jason and the Argonauts, Sinbad movies). The trends show clearly how John Milius's 1982 "Conan The Barbarian" movie, starring Arnold Schwarzenegger, inspired a lot of others; it had followed closely on the heels of "Clash of the Titans," Ray Harryhausen's last animated masterpiece.  Some featured new perspectives, like Excalibur, Fire and Ice, and Legend...and were good enough to enhance, not dilute, the genre (another blogger tackled the 1980's category thoroughly-link).

Unfortunately many "Conan clones" generally lacked in quality.  Well actually, even Arnold's next Conan film, "the Destroyer" was more cheese than it was entertainment...and the 2011 Conan reboot with Jason Momoa (which, despite a good performance from Momoa) had a blatant disregard for basic story-telling.  The 2010 reboot of Clash of the Titans and its sequel 2012 Wrath of Titans were lackluster (a third film is in development, for what that is worth).  So with all this, should we have hope that quality fantasy will return?

Future of Hope: Yes, fans should be hopeful.  Peter Jackson's excellent treatment of Tolkien's Lord of the Rings in 2001 seems to have sparked another surge.  With the excellent translation of George Martins Game of Thrones on HBO (being a series and not a movie, that is not captured in the graph), Peter Jackson's Hobbit trilogy in progress, a live action version of Fire and Ice in the works, and even a sequel to Solomon Kane brewing...we have reason to beleive that the portfolio of Sword & Sorcery movies will grow in quantity and quality.  In fact Dealine.com reports that "Legend of Conan ~2014" intends to redeem Conan's credibility:


"There are no plans for Momoa to return. Morgan said that in his mind,The Legend Of Conan not only skips over that film, but also the 1984 sequel that Schwarzenegger starred in. The direct link is to the original, which was directed by John Milius from a script he wrote with Oliver Stone."

Deathstalker: Anyway, as we await new flicks, I find myself checking out the old ones I had missed.  I do not expect much. There is a stunningly hilarious and through review of the Deathstalker series on cinemassacre.com from 2010 (embedded video below). It dissects the absurdity of the series, even going as far as to quantify the ratio of fight scenes to women's breasts shown per movie.  Of course, I have not seen the movies yet, but have just received them by mail and I am mentally prepared now.  What is sad is that many of these had great covers by artist Boris Vallejo, which promised to deliver serious Sword & Sorcery.  Great marketing I suppose.

Posted by SE Lindberg at 11:32 AM Links to this post

The Compleat Khash: Volume One: Never a Backward Glance by Brian Lumley
S.E.'s rating: 4 of 5 stars

Sword and Mythos - too Entertaining to be Horrific: Vintage dark fantasy spawned in the early 1900’s from the work of pen-pals R.E.Howard and H.P.Lovecraft; though it seems rare to find quality Conan-Mythos mash-ups. If they exist, they are usually in singular short stories, not represented by a series of books or a continuing character. That’s where this book comes into play. A group-read on “Sword and Mythos” themes sponsored by the Sword and Sorcery group on Goodreads.com led me to Brian Lumley’s take on this weird fantasy niche.

Lumley dumps a barbarian (Tarra Khash) into mythos milieu (world of Theem’hdra) in a set of three books (~28 tales total). The series has been printed at least twice, most recently under the brand “Tales of the Primal Land” from TOR books. The first in the series is a prequel that sets the stage for Tarra Khash’s adventures (the last two volumes). The second, the subject of this review, is the first about Khash (aka “The Compleat Khash: Volume One: Never a Backward Glance” …or “Tarra Khash: Hrossak!: Tales of the Primal Land” by TOR in Kindle and paperback…more on book versions below).

Tarra Khash has a go-with-the-flow attitude; generally has conflict with evil sorcerers and is indirectly aided by a third party god. Lumely's World of Theem'hdra is full of gods (celestial entities, collosal insects, vampyric shapeshifters). Most of these tend to like Tarra, and aid him on his quests. His goal is often to regain possession over his sword. He also finds himself constantly incarcerated (in caves, gibbets, pits). It has all the hallmarks of good fantasy: weird creatures, bloody battles, divine intervention, and tales worthy for bards to sing about. My favorite chapter was “Ch 4: Curse of the Golden Guardians” when Tarra Khash ventures into a subterranean shrine of Cthulthu, and the eldritch god is not just mentioned in passing…but assumes an integral part of the adventure. Contrived coincidences keep these stories very entertaining, but reduces the horror element expected of Lovecraftian Mythos fiction (keeps this from a 5 star rating). This is highly recommended for fans of Michael Shea's Nifft character: Nifft the Lean.

Availability: Unlike most Sword & Sorcery this yarn of short stories continue developing linearly (one tale directly flows to the next). They could be read out of order, but work well as chapters. This volume was good enough for me to track down the other two.

The TOR books (~2006) “Tales of the Primal Land” series all have maps, which are nice; also available in Kindle format. Die-hard bibliophiles will want to consider tracking down the earlier editions (~1994) illustrated by Jim Pitts and published by Ganley (Ganley ebay storefront..or try Abebooks.com). The Jim Pitt illustrations are nice and reminscient of 1990 Olde World Warhammer-Trademark of Games Workshop, but strangely the Ganley Books (at least the Compleat Khash Vols 1 a& 2) do not include a map (I even had a "Deluxe" version #214/300 signed but author and illustrator… but this awesome edition still was mapless).

#2 (Tarra Khash Adventures-2): The Compleat Khash: Volume Two: Sorcery In Shad… or …Sorcery in Shad: Tales of the Primal Land

View all my reviews
Posted by SE Lindberg at 12:30 AM Links to this post