I commissioned Ken Kelly to make the cover art for the sequel to Lords of Dyscrasia, and the painting is due shortly. When the cover art is completed, I will share a blog post chronicling the design.Expect more updates on the sequel soon. The target publishing date is early 2014.

Ken Kelly is a famous fantasy artist who studied under the legendary Frank Frazetta.  Kelly has become a legend himself; browse his oil painting gallery and you will recognize the Horseclan covers, tons of Conan covers, etc.

Of course I have a hobby creating Season Greeting cards (link to S.E.'s card gallery), sometimes with a dark twist...and sometimes with an aim to mimic Frazetta (see 2010 card), but I never approached the darkness Ken Kelly presented so well in "Seasons Greetings".  I have already started this year's card (yes, I know it is only August, but my Fall schedule is busy).  No worries...my card will not be this dark.
Link to Ken Kelly's Seasons Greetings Painting

Posted by SE Lindberg at 10:16 AM Links to this post

Our house is still ramping up its dye-making capabilities.   The garden continues to grow enough that we can now harvest the Madder roots without depleting the patch (started in 2011 –link to post).  The basement will soon be a functional workshop, with plenty of lighting, a sink, electricity, and benches. 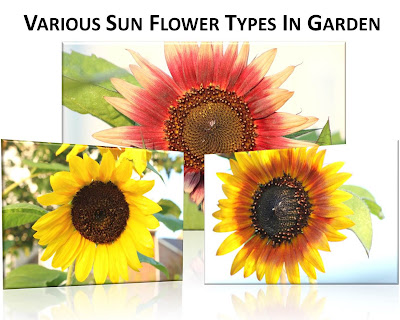 Thanks to my wife’s gardening, we have plenty of sunflowers.  Some are of the Hopi variety, the seeds of which have been used by Native American Indians to prepare purplish/gray dyes.  Whereas I hope to make my own paints, she plans to dye fabric (DesignLab link)...so expect a post later on the seed-dye making.  Many flowers are brought into the house and drop pollen.

Given the nature of pollen to be colorful, tiny, and sticky, I started collecting it to use as pigment. First we had to replace the fabric tablecloth beneath the vase that was being “painted”; aluminum foil worked well since the pollen did not adhere to it, and it could be folded into a funnel  to deliver the pollen into a jar. 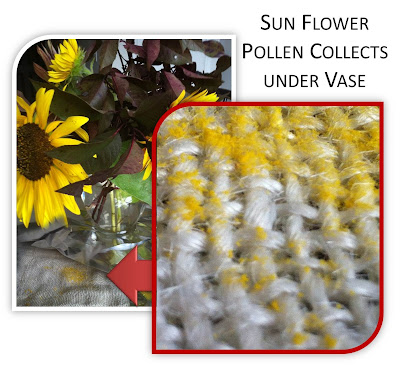 To learn about how it may work as a pigment, let’s have a look at the pollen grains: (1) dry,  (2) in oil, and (3) in water.  Below, the pollen-in-air color image is a brightfield microscopy image; to show the detail, differential interference contrast microscopy (monochrome image) was performed. Most were a-spherical (“not spheres”) and ~10microns in width (that’s ~1/10 the length of a human hair). Clearly their spikes help them to stick to substrates.  The grains are a mixture from several sunflower plants.  Most were yellow, but some were purple. 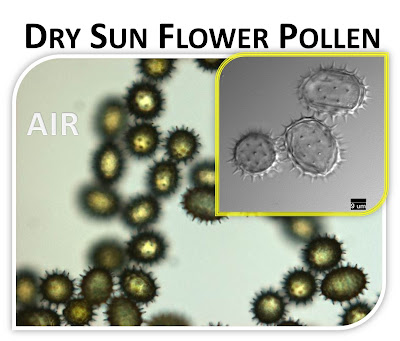 To make paint, pigments are dispersed into liquids.  These host liquids are usually water-like or oil-like.  Actually, microscopists often embed dry samples into liquids, to reduce scattering and improve imaging (this works if the samples do not react or transform in the liquid). These immersion tests reveal how these grains may be color-fast (or not). 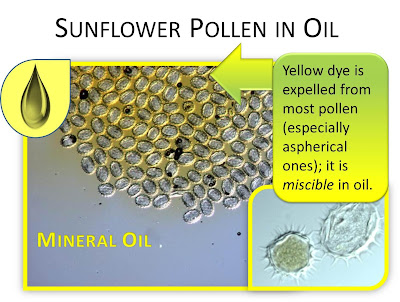 Turns out, the sunflowers lost their color in the oil; but their shell shapes did not change.  This means that the pollen is filled with a hydrophobic liquid (dye), and that the shells are porous.  Actually, the spherical grains seemed to leak less (I will have to investigate further if only certain sunflowers produce those). In water, the yellow dye was slowly replaced.  It was shot out of the shell as drops.  This confirms that the dye is hydrophobic, and that the shells are porous.

This work will inform a paint recipe.  The observations are somewhat aggravating since they indicate it may be difficult to keep dye inside the grains whether a water-paint or oil-paint is made.  For now, I will keep collecting the pigment and will lean toward design an aqueous host phase. 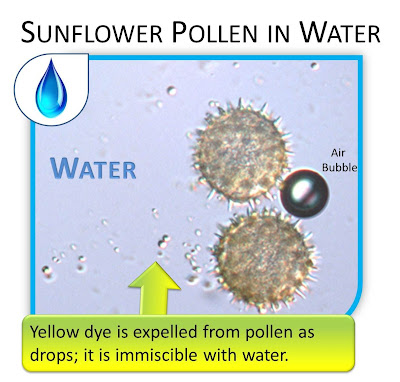 Posted by SE Lindberg at 7:55 AM Links to this post

The Harsh Suns - Review by S.E.

Jason E. Thummel proved he was an accomplished author of short story adventure with In Savage Lands, in which he delivered 13 quality Sword & Sorcery tales. Actually the author’s track record with publishing shorts via Blackgate and Rogue Blades Entertainment speaks to his merit. In addition to Thummel’s crisp writing, I have been attracted to his retro-vibe cover designs (artist Didier Normand painted covers for In Savage Lands and The Harsh Suns).

With The Harsh Suns, he develops a continuing character, chronicling the warrior Khal across three chapters (each essentially a short story). The focus is on warrior Khal’s quest to avenge his sister’s death. The primary conflict is “Kahl vs. evil-sorcerer Thanak Sul,” but there are recurring undertones of “Khal vs. gods/religion” which fortify the adventure with depth. Plenty of Sword & Sorcery delivered well. This is pulpy adventure, so you expect some arbitrary predicaments that keep the pace rolling.

The book essentially is an “origins” story that explains how Kahl becomes a wayfaring, god-cursed fighter. There is no explicit cliffhanger, but I was left expecting a sequel. I would welcome that.


View all my reviews
Posted by SE Lindberg at 5:30 PM Links to this post

Fifty Lords of Dyscrasia ePubs, PDFs, and Kindle Mobi's are being given-away on Librarything (until Septemebr 2nd 2013)!

And a tangible paperback is being offered on Goodreads!

"Pulp fantasy for the horror fan!" Beware, Lords of Dyscrasia is dark. How dark? Check out this review from a disturbed Goodreads reviewer: "...This is, without a doubt, the darkest book I've ever read. I don't have any problem with those sorts of things normally, but this was on a whole other level of twisted evilness. Murder, rape, cannibalism, drinking blood, necrophilia, necrophagia, demonic possession, and things involving children that I wish I had never read... You can try to compare it to Poe, who is dark, but not holy crap this is seriously effed up psycho dark…. In summary, this is an amazingly intricate and unique story line which is totally psychotic and I will never read it again…"
Looking for unique horror? Read on. : "...Outside of the works of Poe and Lovecraft, there are few, if any, novels comparable to [Lords of Dyscrasia]...Beowulf comes to mind both for its epic quality and bloody action...The pace is nearly breathless... Lindberg, who also created more than 50 illustrations and the cover for this book, makes the majority of current popular fantasy fiction read like recipes by comparison. Lords of Dyscrasia is highly recommended, though not for the faint of heart."Lords of Dyscrasia explores the choices humans and their gods make as a disease corrupts their souls, shared blood and creative energies. Historically, dyscrasia referred to any imbalance of the four medicinal humors professed by the ancient Greeks to sustain life. Lords of Dyscrasia presents them as spiritual muses for artisans, sources of magical power, and contagions of a deadly disease.
Learn more on S.E. Lindberg-Blog (Link)
Posted by SE Lindberg at 7:57 AM Links to this post