Tales from the Magician's Skull - Review by SE 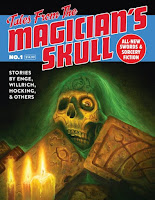 Tales from the Magician's Skull #1 by Howard Andrew Jones
S.E. rating: 5 of 5 stars

"Behold! I have fashioned a magazine like those from fabled days of yore. It overflows with thrilling adventures. There are swords, and there is sorcery. There are dark deeds and daring rescues. There are lands where heroes fear to tread." - The Magician's Skull speaks in Kickstarter


Should you trust a talking skull? Well, no sane person would, but I attest this Skull does not lie. Tales from the Magician's Skull #1 spawned from a successful 2017 Kickstarter Campaign in which Howard Andrew Jones (Sword & Sorcery guru, author, and RPGer) teamed up with Joseph Goodman of Goodman Games, publisher of Dungeon Crawl Classics. The resulting magazine reflects this partnership, marrying great stories with suggested RPG game items. As a backer and enthusiast of fantasy fiction, I couldn’t be more pleased.

QUALITY: The quality is great (the artwork, editing, illustrations, paper-feel etc.); this magazine is just fun to hold.

APPENDIX: The Appendix! What a great design idea! To drive home the RPG elements of the stories, these guys created items and rules related to each story for the Dungeon Crawl Classic RPG. This is really cool. read the stories...then go play them.

STORIES
1) "What Lies in Ice" A Gaunt and Bone story by Chris Willrich - For me this was 3-stars, but I think YA-adult and lit-RPG (literary RPG) readers will enjoy it more. For a short story, this has a huge party of protagonists (>6), heavy doses of comic relief, and an overabundance of fast-paced story telling that shoots for ADHD action scenes rather than elements-that-build-on-each other. It reminds me of a Marvel Avengers movie. It has too much in it to allow an old fogie like myself enough to grasp on to, but it does have a lot of neat things going on (as disjointed as they are). My favorite concept/creature: Hands of the Sea (which is the first item in the Appendix!).

Sharing my thoughts on Goodreads prompted the Sword & Sorcery crowd assured me that followers of Gaunt and Bone will enjoy this since it ties together other G&B yarns.

2) James Enge's "The Guild of Silent Men : A Story of Morlock Ambrosius". 5-star! Although less action than the previous story, this fantasy-murder mystery delivers more than enough swords-n-sorcery while fleshing out Thain Morlock's background and motivations. A fun read that also serves to make me want to learn more. Perhaps I should go get Blood of Ambrose right now.

3) Bill Ward's "Beneath the Bay of Black Waters” A Tale of Shan Spirit Slayer and the Banner General Bao" - 4-stars. I'm a big Bill Ward fan (i.e., his anthologies like
Mightier than the Sword and Last of His Kind). This Asian/Orient adventure is led by an entertaining duo tracking a drug trade (of Black Pearls, being mysterious narcotics) from the Fish-Gutter gang. Death escapes the protagonists more than it should, but the story is great.

4) Aeryn Rudel's “Beyond the Block” - 5 stars. A first-person perspective was perfect for this undead horror. Another duo stars, this time its Lucinda and her brother Matthais (the narrator). Matthais is a blacksmith who seeks to defend Lucinda from Lord Magister Vyard (a sorcerer who wants something of Lucinda’s magical potential).

5) Howard Andrew Jones’s “Crypt of Stars, From the Chronicles of Hanuvar Cabera" has one primary hero: Hanuvar of the Volani. It's him against the invading Dervani who are out to raid his ancestral cemeteries. I am a big HAJ fan, having followed his blogs and Black Gate articles and enjoyed his fiction (i.e., The Bones of the Old Ones). He never disappoints. 5-stars.

6) C.L. Werner's "There Was an Old Fat Spider” offers a biased protagonist, Karl, who may be an anti-hero. A knight and civil protector Rudolf Goettinger tracks Karl down in this Germanic/Gothic tale that reminded me of Werner's Warhammer tales. Lots of gray areas here. Good grimness. 4-stars.

7) John C. Hocking’s “The Crystal Sickle’s Harvest. From the World of the Archivist." Another police-like duo lead this mystery: Thratos (mentor Hand of the King sorcerer) and Benhus (young mentee, warrior sorcerer). Thieves are breaking into royal crypts, but not necessarily to steal. Why? Some neat Magical Weapons are presented, i.e., the Nobleman's Comfort (magical wand, and its in the Appendix). Best of all, this story has a talking skull! But is it THE skull? 5-stars.

VOLUME #2 promises more of the great quality, and it is nearing publication (June 15th 2018). I suggest you join the Legion of the Skull, whether you like to read, play RPGs, or both.


View all SE reviews
Posted by SE Lindberg at 7:51 PM Links to this post

Poll
Vote for the July-Aug Groupread. These topics are broad, so only one topic may win. Feel free to suggest others in the Write-In field.

Any Black Company by Glen Cook

Appendix N
comments and details · show results · invite friends
Posted by SE Lindberg at 8:32 AM Links to this post