Note this is Part of a series:

#1) Dark Muses I: The undercurrent of "Art" in Weird literature 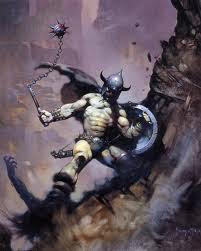 Weird artists have consistently felt misunderstood by the masses, and readily defended their interests as healthy, without evil intent. Just decades ago, renowned fantasy cover artist Frank Frazetta combated the apparent immaturity associated with his art, as he is quoted in his retrospective book Icon:

"They're positive my art my work is bloody and terrible, and I say 'oh Yeah? Find it!' And they can't.  There's merely the suggestion of it, a little splash of red on a sword, a spot in the snow, and that's it.  I don't paint heads rolling around, or severed limbs... In spite of the subject or violence, I want every painting to be a thing of beauty."  (i)

"Sometimes I wonder what people really see when they look at my art.  I mean, I know I exaggerate my figures for effect, make them in ways they may not normally move, push things a little to heighten the excitement.  And I can get away with the exaggeration and still make you believe in the reality of the scenes because I know how to draw.  I know my anatomy.  I know how real people and real animals move.  But these guys who are trying to 'do' me, boy!  Arms and legs the size of trees; blood and guts everywhere, that's not what I do.  My figures are muscular, but for chrissake, they're not ridiculous. And despite the violence in my art I want people to look at it and say, 'It's beautiful!' and forget about the situation.  I want them to look at it for the sheer beauty and symmetry and the wonderful shapes and color and rhythm, and that's all they will see.   They don't think about the fact it's a battle scene.  It's taste that separates the men from the boys..." (ii)

Frazetta posed that a portion who admired and attempted to imitate his work did not understand why his designs were effective.


Offer an experience, not a photograph

The effect of horror is best gained when the sensation is most intangible. To put the horror in visible shape, no matter how gibbous or mistily, is to lessen the effect. I paint an ordinary tumble-down farmhouse with the hint of a ghastly face at a window; but this house-this house-needs no such mummery or charlatanry; it exudes an aura of abnormality-that is, to a man sensitive to such impression. (iii)

So wrote R.E. Howard who funneled his views of weird art though his characters, as in the above quote from The House in the Oaks (a story posthumously finished by August Derleth).

Conveying aesthetic events is a key success criteria expressed by many weird artists.  Dark fantastical art serves as an experiential map that appeals to the futile hopes of readers who, mindful of the terror but driven by conviction, want to understand the human spirit. Those who think dark art is scary and evil or necessarily gory, those who reprehend it, are merely ignorant. Perhaps those called by dark muses care to endure the terrific process of speculating, researching, and mediating the unknown by reading and writing. Those not willing to experience weird art, but are willing to critic or trivialize it, may just be terrified to explore the human spirit.

Today's mass market genres of fantasy and horror fiction arguably grew from a single 'weird' source nearly a hundred years ago during the depression era; pulp magazines were emerging as a new mass medium, and short stories by authors like H.P. Lovecraft, Clark Ashton Smith, and Robert Ervin Howard carved new boundaries around the realm of fiction. What might interest unfamiliar with weird fiction are the motivations that lured many readers: a desire for answers and the fear of discovering them. Mass market horror and fantasy genres that later evolved from weird fiction are no longer defined by this, for the genres have grown into new territories and audiences that include markets for children, young adults, and consumers insistent on purchasing trilogies. Clark Ashton Smith, weird author, artist, and contemporary of Lovecraft and Howard captured the beauty of the weird tale:


Mr. Lovecraft has stated very lucidly and succinctly the essential value and validity of the horror story as literary art, and there is no need to recapitulate his conclusions. It has often occurred to me that the interest in tales of horror and weirdness is a manifestation of the adventure impulse so thoroughly curbed in most of us by physical circumstances. In particular, it evinces a desire-perhaps a deep-lying spiritual need-to transcend the common limitations of time, space, and matter. It might be argued that this craving is not, as many shallow modernists suppose, a desire to escape from reality, but an impulse to penetrate the verities which lie beneath the surface of things; to grapple with, and to dominate, the awful mysteries of mortal existence. The attitude of those who would reprehend a liking for horror and eeriness and would dismiss it as morbid and unhealthy, is simply ludicrous. The true morbidity, the true unhealthiness, lies on the other side. (iv)

References
Posted by SE Lindberg at 10:20 AM