Offutt's BS: The Black Sorcerer of the Black Castle - Review by SE 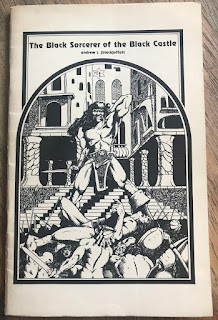 The Black Sorcerer of the Black Castle by Andrew J. Offutt
S.E. rating: 4 of 5 stars

The Black Sorcerer of the Black Castle is Andrew J. Offutt's parody of Sword & Sorcery. The one I read has illustrations from Jim Pitts, introduction by Wayne Warfield (editor), and an afterword by andrew j. offutt (who seldom capitalized his name).

It is intentionally overwritten with excess adjectives, and offutt referred to this as "BS" (short for many things, Black Sorcerer included.) The story has the common tropes of a lone hero fighting ~3 representations of something evil capped with a final confrontation with a malicious wizard. Plenty of silly call-outs to the S&S crowd are within (i.e., the wizard is named Reh after Robert E Howard).

I heard about this via the Sword & Sorcery group on Goodreads. My goal was further to understand how the use of color was applied in pulp fiction (S&S especially).

The afterword reveals the story's evolution. More importantly, it showed how multiple readers/editors preferred a particular balance of humor and action. In fact, offutt confessed he learned via working with BS of his Great Discovery:


"pornography and heroic fantasy have something much in common: both quite for different reasons, need to create a mood and a spell, and to make it last --and neither, can be overwritten.

View all my reviews
Posted by SE Lindberg at 12:05 PM