Note this is Part of a series:

#1) Dark Muses I: The undercurrent of "Art" in Weird literature

#3:  Historical Anatomy: Composing Bodies and Representing the Invisible Soul (you are here)

Historical Anatomy: Composing Bodies and Representing the Invisible Soul
Sixteenth century apothecaries sourced both medicine to physicians and raw materials to artists; the former treating souls with medicine, the latter manufacturing their own paint so they could portray the divine (as there were no art supply stores then, nor industrial means to mass produce it).   Artists, alchemists, and early physicians would also convene within the dissection chambers.  Anatomical artists had to grapple with documenting macabre scenes of opened bodies while remaining 'artistic'.  For the dignity of the specimens and to satisfy the surgeons' needs, artists often found harmony by posing their subjects.  Many artists captured or imparted a bit of the lost soul into their dead subjects.  Perhaps most famous are Johannes de Ketham's Fasiculo de Medicina (1491), Andreas Vesalius's De Humani Corporis Fabrica (1543), and Leonardo Da Vinci's notebooks (~ 1452-1519).   Recent compilations like The Quick and the Dead i and Spectacular Bodies ii are fantastic resources on this subject. 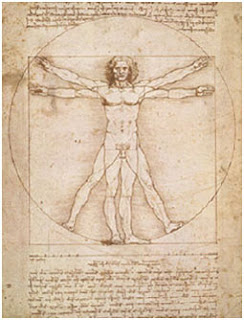 The prevailing Church did not permit the dissection of innocent believers, so criminals or 'sinners' were often used.  Then, the notion of the four humors prevailed.  Bodies were considered divinely sacred and were thus difficult to obtain and dissect; those corpses deemed acceptable could not be refrigerated, so one had to work fast!  Nor were there cameras or video to capture the observations!  Artists and alchemists partnered to explore, and document the microcosm of life.  Leonardo Da Vinci provided detailed notes along with his drawings:

"I have dissected more than ten human bodies, destroying all the various members and removing the minutest particles of flesh which surrounded these veins, without causing any effusion of blood other than the imperceptible bleeding of the capillary veins.  And as one single body did not suffice for so long a time, it was necessary to proceed in stages with so many bodies as would render my knowledge complete; this I repeated twice in order to discover the differences.  And though you should have a love for such things you may perhaps be deterred by natural repugnance, and if this does not prevent you, you may perhaps be deterred by fear of passing the night hours in the company of these corpses, quartered and flayed and horrible to behold; and if this does not deter you, then perhaps you may lack the skill in drawing, essential for such representation; and if you had the skill in drawing, it may not be combined with the knowledge of perspective; and if it so combined you may not understand the methods of geometrical demonstration and the method of estimating the forces and strength of muscle; or perhaps you may be wanting in patience so that you will not be diligent." iii

How brutally, and beautifully, clear he was in describing what was necessary to follow his muse.   Corpses were given personality, soul if you will, through artificial poses and theatrical, emotional countenances.  Da Vinci determined through his dissections that the senses were linked to a 'common sense' that led to the brain.  But no actual soul was discovered. He yielded the goal of managing the soul to religion.   Below, from his treatise on painting, he spoke how the artist must deal with this and impart the soul into its subjects otherwise:

"A good painter has two chief objects to paint, man and the intention of his soul; the former is easy, the later hard because he has to represent it by the attitudes and movements of the limbs. "iv

With the most promising connection to our souls being the senses, it follows that the next great promise of discovery came when the technology of optics allowed scientists to see, and draw, new worlds.  Astronomers were anxious to probe the heavens and documented the heavens; for instance, Galileo's Starry Messenger (1610).  Pioneering microscopists had to capture their views with pen and parchment.   In 1664, Robert Hooke published a large treatise entitled Micrographia, containing an encyclopedia of detailed drawings of his microscopic views.   To have these reproduced in print, each drawing had to be converted into an engraving!  From this, Hooke is credited for coining the word 'cell' to describe the pores in cork.   In his preface, he explains to the reader that optics have enabled a spiritual quest:

The next care to be taken, in respect of the senses, is a supplying of their infirmities with instruments, and, as it were, the adding of artificial organs to the natural; this in one of them has been of late years accomplished with prodigious benefit to all sorts of useful knowledge, by the invention of optical glasses.  By the means of telescopes, there is nothing so far distant but may be represented to our view; and by the help of microscopes, there is nothing so small, as to escape our inquiry; hence there is a new visible world discovered to the understanding.  By this means the heavens are opened, and a vast number of new stars, and new motions, and new productions appear in them, to which all the ancient astronomers were utterly strangers.  v
There are two key points: one, the spiritual creative process occurs when artistry, science, and spiritualism coincide; and two, the soul has never found.  Despite how far we see into space with telescopes, or how well we resolve structures with microscopes, the soul still eludes us. 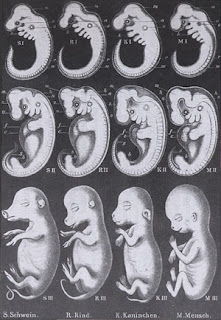 Ernest Haeckel (1834-1919) was a famous artist-scientist fascinated with the aesthetics of nature and the elusiveness of the soul.  His 1904 set of lithographs Art Forms in Naturevi  brilliantly exhibit his obsession with the symmetrical beauty of biological microstructures, and his extensions into comparative embryology brought him controversy.   He argued this in his support of his own monistic religion that scientific adventures continually uncovered the beautiful designs inherent in nature (monism generally supports that "body and soul" are one connected entity, not separate as many dualistic religions profess):

The remarkable expansion of our knowledge of nature, and the discovery of countless beautiful forms of life, which it includes, have awakened quite a new aesthetic sense in our generation, and thus given a new tone to painting and sculpture.  Numerous scientific voyages and expeditions for the exploration of unknown lands and seas, partly in earlier centuries, but more especially in the nineteenth, have  brought to light an undreamed abundance of new organic forms...affording an entirely new inspiration for painting, sculpture, architecture, and technical art.  vii

In 1900, Haeckel published his scientific, spiritual book Riddle of the Universe at the Close of the Nineteenth Century in which he explains his monistic philosophies.  Within this he has elegant discussions about the soul's lack of participation in the "Laws of Substance" (conservation of mass and energy); below, he discusses how many related the nonexistent soul to that which is tangible:

Thus invisibility comes to be regarded as a most important attribute of the soul.  Some, in fact, compare the soul with ether, and regard it, like ether, as an extremely subtle, light, and highly elastic material, an imponderable agency, that fills the intervals between the ponderable particles in the living organism, other compare the soul with the wind, and so give it a gaseous nature; and it is this simile which first found favor with the primitive peoples, and led in time to the familiar dualistic conception.  When a man died, the body remained as a lifeless corpse, but the immortal soul "flew out of it with the last breath." viii

Many beautiful rituals evolved since souls could not be truly located or measured after a body died; many myths persist that cannot be readily falsified.  The notion of relics is common across cultures and time. It assumes that the soul is a contagion remaining attached to the body postmortem.  Hence, the power of a Saint could be absorbed if one obtained his or her bones; this gave rise to the theft and desecration of many crypts and catacombs.  Many crypts remain with the bodily relics are on display:  the crypt of Saint Munditia of Munich and the Vienna Imperial Crypts are fine examples.

More bizarre, and beautiful, is the notion that souls could be deified by creating architecture with the bones of the deceased.  Here the artist would convene with the spiritualist in a funerary chamber and temple.  Famous examples include: the shrines of Capuchin monks in Rome and Palermo, Sicily (these catacombs contain 6,000 to 8,000 bodies); and the Kostnice 'Church of Bones, Kutna Hora, Sedlec Ossuary, Prague, (containing remains of forty thousand people); lastly, the impressive catacombs of Paris (l'Ossuaire Municipal) in which several condemned cemeteries were collocated in the 18th century and countless skulls comprise the walls. 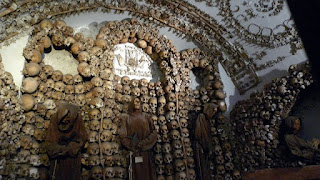 If one can make architecture from our bodies, can one make pigments or paint from them?  Organic matter played a strong role in the history of art technology.  Parchment, vellum, was manufactured from the hides of animals before wood based paper was available.  Size, a gluey substance used to prepare surfaces or harden gesso, was made from boiling skin and bone.  Many medieval pigments were iron based (blue, red, black iron oxides) or were derived from living material (dried blood, sintered black bone, and many binders were protein based (milk casein, egg yolk).   Calcined bone is used as a white pigment.  Gallstones were sometimes used as a source of yellow color in the Middle ages.  Bile was used for some greens.  Caput mortem was a mysterious pigment that may have been just iron oxide or, if the ghoulish rumors are true, powder from pulverized mummies.