Upon the Flight of the Once Queen - Review by SE

A Grim Take on the Holy Grail: Upon the Flight of the Queen by Howard Andrew Jones - Nov 12th 2019 Black Gate 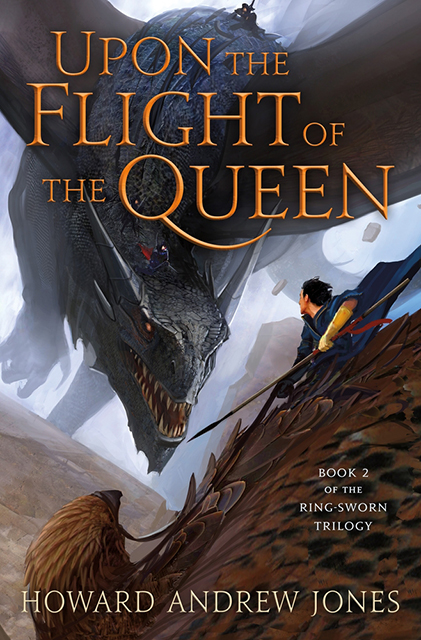 Howard Andrew Jones’s For the Killing of Kings jumpstarted the epic fantasy Ring Sworn trilogy this February 2019, and the sequel Upon the Flight of the Queen hits shelves next week (November 19th). MacMillan’s St. Martin's Press pitches the series as “The Three Musketeers presented via the style of Zelazny’s Chronicles of Amber.” The pacing is reminiscent of Zelazny since Howard Andrew Jones (HAJ) doles out action and backstory with precision. Yet there are many more than three heroes, and the milieu has more medieval flare than musketry, so it is more “King Arthur’s Knights of the Round Table” than Musketeers. For the Killing of Kings is actually a grim take on the consequences of seeking, and finding, a figurative Holy Grail (hearthstones). The Altenerai guard had been spread out over the Five Realms searching for many hearthstones that fuel magic — the enigmatic Queen Leonara deems them holy. Twice I was completely floored by plot twists, and the last third kept me from going to sleep. I haven’t had that much fun reading a book in a long time. Black Gate’s Fletcher Vredenburgh's review should likewise entice new readers. 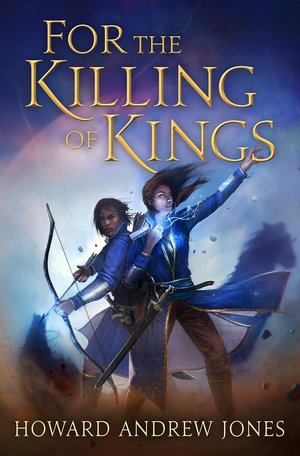 #2 Upon the Flight of the Queen

Summarizing a sequel can be tough without spoiling its predecessor, but the following overview will try as it showcases why you should commit to Ring-Sworn. Upon the Flight of the Queen starts off exactly where For the Killing of Kings ends. The adventure begins in high-gear with Alten Rylin assuming his action-thriller role (~James Bond) penetrating the Naor camp disguised in magic, dragging the reader into mayhem.

The primary story arc still focuses on the coming of age of the female squire Elenai, a soldier with burgeoning magic prowess. Her rise in the Altenerai ranks is compelling. On her journey she campaigns with seasoned members who are still reeling from the previous war; their commander was killed, and their Queen Leonara decided to make temporary peace rather than annihilate the barbaric Naor enemies. War rages across the Five Realms of the Dendressi again, but now the Altenerai forces are less prepared, less numerous, and less united. By the end of this sequel, the new war with the Naor reaches a major milestone, and the Queen is confronted by the Altenerai. Upon the Flight of the Queen delivers on all the tension brewed in For the Killing of Kings, and you’ll still be left hungry for a third installment.

HAJ applies the same intense momentum from his Sword & Sorcery short fiction into these novels. Even though the Ring-Sworn epic spans a continent with dozens of characters, it propels without any filler. Likewise, despite there being ample political intrigue with the loyal Altenerai have been replaced with secretive Exalts of Queen, the conflict pulls no punches. HAJ simultaneously covers:


How Can so Much Ground be Covered so Fast and Smoothly?

The carefully designed milieu enables the efficient storytelling and informs everything: the magic systems, the health of the land, and every character’s motivations. The Naor, the kobalin, the Dendressi… all have cultures, and biology, intimately tied to the Five Realms and the conflicts between them. The Naor and ko’aye fight over nesting lands, the hearthstones obsessed by the Queen literally tap into the land’s substance, and as nature is reshaped, so too are the kobalin’s bodies:


[The Shifting Land] looked as though some mad deity had dropped geometric monoliths upon a distant line of irregular hills. Immense, perfectly square onyx and celadon blocks had embedded in three of the nearer ones, and the slopes were littered with smaller cubes of gray and green.

Storms pass and interact with the land and the creatures who live there—nature and beast share the same chaotic lifeforce:


…the light harshened and the dark, rocky soil under their feet transformed into white sand blazing under a tropic haze. The kobalin crooned, then they themselves began to shift…Qirock’s hands lengthened to claws and the hunched one grew hooves... the orange one thrust new elbow spikes into the soil.

Expect a Diverse Cast, with Contemporary Issues and Comic Relief

Don’t expect dwarves, elves, and such, since HAJ is always motivated to create fresh experiences. The Ring-Sworn has a unique cast of humanoid creatures, like the kobalin Ortok who provides humor as a fierce frenemy: if Ortok respects you, then he’ll challenge you to a duel to the death. Ortok’s banter and social analyses are hilarious. A few of the cast are sexually nonbinary (orientations are not a focus of the story, just low-key matters of fact). The macho Rylin certainly tries to charm more women than he deserves, but he is driven to be chivalrous and his approach to relations matures during the adventure. Gender roles even add tension amongst the masculine Naor ranks. Despite a requisite dose of masculinity (via testosterone-fueled violence), women play a dominant role in the book. In addition to Elenai’s role as lead protagonist, all the governors of the realms are female: Queen Leonara of Darassus, Verena of Vedessuus, and Feolia of Alantris.

The antagonistic Naor disdain modern sensibilities and civilization. They love to coerce/enthrall dragons to fight on their behalf, they ransack nesting grounds of the ko'aye and harvest blood from hundreds of people to fuel their blood-sorcery (sacrificial “olech” ceremonies). All that just makes them really entertaining, bad guys. While the standard humans are fascinated with hearthstone magic (at the expense of the land’s health), the Naor are thrilled to practice blood magic (at the expense of life):


The rising strands of blood twisted into ropes that quickly shaped a complex framework. Over the course of a few minutes a scaffolding took shape, over which recognizable forms grew distinct: a torso, a head, a mass below that which was flowing and vaguely fishtail-like until it was revealed as the bottom of a robe… long strands of blood hung down either side of the head… Vannek looked upon a sculpture of his oldest brother.

A map was not necessary for the first book, but Upon the Flight of the Queen expands the scope of action across the Five Realms and a map appropriately complements the story. As the Lauren Saint Onge cover indicates, readers will experience aerial battles between dragons and Archaeopteryx-like ko’aye. Darian Jones, son of the author, is a skilled animator and produced the trailer. Fletcher Vredenburgh interviewed Darian Jones and revealed how the trailer was designed and made (including the music), and sheds light on a father-son relationship.

The trilogy is well underway. During the Feb 2019 Reddit Ask Me Anything (AMA), I inquired on the release schedule. HAJ returned: “The third book is fully outlined, and I had begun drafting…”. From subsequent correspondence, I learned the working title for Ring Sworn #3 is When the Goddess Wakes (obviously subject to change), with a targeted release in 2020.

When not helping run his small family farm or spending time with his amazing wife and children, Howard Andrew Jones can be found hunched over his laptop or notebook, mumbling about flashing swords and doom-haunted towers. His novels include The Chronicles of Sword and Sand (The Desert of Souls, The Waters of Eternity, The Bones of the Old Ones) and several Pathfinders Tales. Jones has worked variously as a TV cameraman, a book editor, a recycling consultant, and a college writing instructor. He assembled and edited 8 collections of Harold Lamb's historicals for the University of Nebraska Press, and served as Managing Editor of Black Gate. He edits the Sword-and-Sorcery magazine Tales From the Magician’s Skull, and edits for the Perilous Worlds book imprint.
Posted by SE Lindberg at 6:40 PM