The Robots of Gotham - Review by S.E. 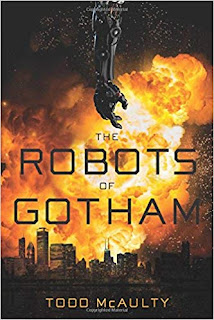 Wearing aluminum hats won't help us anymore. Apple's Siri, Amazon's Alexa, and Google's assistant likely conspire against humanity, and no doubt will copulate and have gendered, machine children.  It's one vision of the future.


The Robots of Gotham novel will at least make our journey toward machine domination more fun. Todd McAulty's first-person style is profoundly easy to consume. Highly recommended for everyone who has a smartphone!

Todd McAulty's The Robots of Gotham has already received great praise from Publisher's Weekly, Booklist, the Toronto Star, Kirkus Reviews, and numerous authors. Here is another.

What is the best way to deal with being constantly surveilled by devices? Being controlled by them? Wearing aluminum hats won't help us (put that smartphone down!), but reading well-crafted fiction allows the journey toward robot domination to be more fun... less scary.

Artificial Intelligence: I am by no means an expert in artificial intelligence, which makes my perspective even more alarming (exciting?); many readers likely share this history, and it is why you'll enjoy Todd McAulty's The Robots of Gotham.

As a teenager (1980's), I had the experience of interacting with Apple IIe and TI94 computers (when data was never stored on disk or was saved to tape) which had users game with a computer that served as a dungeon master. Digitized, text-based adventures like Zork from Infocom/Activision provided a surreal version of Choose-Your-Own-Adventure books. As a chemist for decades who chills with engineers, I've witnessed computers grow from being calculators to devices that measure, store, analyze and report data with limited human intervention.

Currently (2019) there are powerful, open-sourced codes for Deep Learning and Neural Network tasks & decision making--the accessibility and power of enabling AI is skyrocketing. Couple that with the proliferation of smartphones & the-internet-of-things and the once "speculative" concept of Batman using phones to echolocate & virtually surveil a city is near reality (from the 2008 movie The Dark Knight). I confess that in 2008 I thought echolocation was a silly concept, but not anymore.


Can you imagine life with machines in 2083?

Fast forward another six decades, and there is a strong likelihood we humans will be dialoguing with robots as if they are independent, sentient things (cheers to any offspring of Apple's Siri, Amazon's Alexa, and Google's Assitant). Robots will serve many functions beyond soldier or policeman (Terminator or Robocop) including politics.

Todd McAulty, himself an expert in machine learning whose roots came from managing at the start-up that created Internet Explorer, provides us with a compelling vision. For over a decade he created this wonderful thriller, employing protagonist Barry Simcoe to narrate his exploits as a businessman wrapped up in a dystopic war between humans & robots (and robots vs. robots, and humans vs. humans, etc.). Robots have evolved into many classes, many are very "human." Listen in now to Barry as he summarizes his lunch date with the robot Black Winter:


"I really enjoyed our lunch. Yeah, it was a bit awkward at first. Machines don't actually eat lunch, for one thing. But before long we were chatting like old friends.

It's tough to explain why I find Black Winter so fascinating. It's not just the novelty of talking casually to a high-end machine. I've met plenty of machines, although admittedly few of them socially. Black Winter is different. He jokes that it's because he was trained in human diplomancy, but it goes deeper than that. There is something about him. There's a sincerity to him that makes him profoundly easy to talk to."

Profoundly easy to read: Actually, McAulty's writing style is similar to talking to Black Winter. McAulty's first-person chapters are blog posts that are profoundly easy to consume.  This 670page novel was easier to read than most 200page, third-person narratives. Each chapter/post is sponsored by hilarious entrepreneurs too, but these details are easy to overlook since you will jump right into the text.


"CanadaNET1 Encrypted, Sponsored by Hot Pupil.
Are they checking you out?  Hot Pupil monitors nearby skin temperature and pupil contraction for signs of lust. Don't be the last to know.... 100% Accurate" - The Robots of Gotham, chapter XXVI

The first chapter starts with a literal blast and each successive post propels the thrill ride. Why are Venezuelan military forces occupying Chicago? Is Barry being followed? What the hell happened to America? Well, no spoilers here, but we can quote from the one other blog poster beside Barry, a machine journalist called Paul the Pirate, who puts all the madness into context:


"Will any of these three [various sentient entities] -- or their shadowy allies around the world -- be brought to justice for what they've done?

Don't hold your breath. Ain't nothing changed, my friend. Civilization on this planet has been one continuous 30,000-year saga of the rich shitting on the poor, and the new era of the Machine Gods is no different. It's not personal. It's simply about power. You got it, they'll take it from you. Period."

Title and cover: At first glance, the cover and title offer some dissonance. Gotham refers to New  York, where most robots are manufactured. However, the illustration features the Chicago skyline; this is presentative of the story's primary setting. So why are robots from the East Coast invading the Midwest? You'll have to read the book to figure that out.

Is Bary Simcoe a virtual avatar of Todd McAulty? Barry Simcoe is Canadian, works in Chicago, works in the machine learning field, and is an expert blogger. So is Todd McAulty. But who is he really? Well, it is a fun mystery to unravel, one which author Howard Andrew Jones tackles (check out his blog).

More McAulty: The Robots of Gotham is a debut novel and is entirely self-contained. However, the history and characters presented are so fleshed out, that it screams for more. Thankfully there is. According to an interview on The Qwillery (June 20th, 2018), a sequel is in the works called: The Ghosts of Navy Pier.