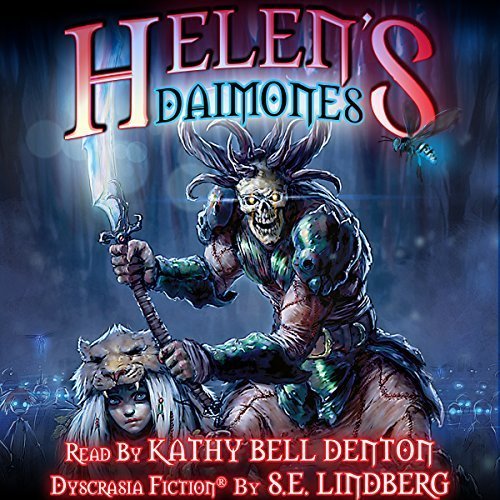 The beautiful, haunting narration by Kathy Bell Denton for the Helen's Daimones audible book - LINK is now out. (just released April 2018). Seriously, check out Kathy Bell Denton's awesome voice in the sample (click the play button on audible, OR the Youtube video below).

Private message me, S E Lindberg, for a complimentary review copies of the book (any format: paperback, ebook, or audio).


Reviews:
Fletcher Vredenburgh from Black Gate reviews Helen's Daimones (link to 2017 review) .
"Helen is one of the stranger heroes to feature in swords & sorcery. Is she delusional, mad, gifted? I was never quite sure — she is only a little girl — but I was never able to take my eyes off her. With a cast as strange as this novel has, Helen remains the focus throughout. Even when she’s off stage, the question of what she is doing always seems to rise to the fore."

"Too much of what’s called grimdark is little more than sex and gore splashed over a standard epic fantasy story. True horror — and at its heart, Helen’s Daimones is a horror story — unsettles, disorients, and makes you feel like the world will fall out from under your feet at any moment. Lindberg’s novel does all those things."


Beauty in Ruins reviews Helen's Daimones LINK
The Dyscrasia novels by S.E. Lindberg are deep, intricate reads that harken back to the pulp days of Lovecraft, Howard, and others... Helen's Daimones is weird fantasy, weirdly told, for weird readers. As the strongest of the three stories to date, it makes for a great introduction to Lindberg's world, and creates more than enough interest for a fourth entry.

What this chapter did for me was breathe real life (no pun intended) into Lord Lysis. He becomes a sympathetic character here, especially in his encounter with a tragic young woman (buried alive so many years ago), the ghosts of her children (hung for their corruption), and their army of dolls (crazy, dangerous dolls). He's still a monster, a fearfully powerful being, but he's also a personality here. As for Doctor Grave, he was already a full-fledged character, but he becomes a little more chilling here as new layers of mystery leave us to question his deeper motives.--- Bob Milne 2017