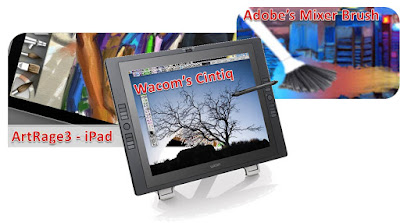 Finally, artisits can "draw" directly on digital screens: on the go, with unlimited color selection....and the ability to work on layers, literally mix colors within a layer, and "undo/redo" multiple edits...and instantly dry/rewet paints...it's crazy!  Some iPad Drawing Applications with mixing abilities include Art Rage and Layers. Technology for traditional computers include premium Digital Tablets from Wacom (the Cintiq), All-in-One Tablet PC's like Dell's Inspiron,  and Adobe's Photoshop CS5.5 Mixer Brush and Bristle Tips that allow for rotational control of asymmetric "fan" brushes in addition to the awesome, pressure sensitivity.


How did Medieval Artists live without these?

Early painters could not go to Walmart or Amazon to purchase "traditional" paints or sketch pads. The industrial production of paints did not emerge until the late 18th century (ref: Colors: The Story of Dyes and Pigments by Francois Delamare and Bernard Guineau).  So in addition to learning how to produce art, early artists also had to learn where to find the base materials (minerals for pigments, extracts for dyes, skin for canvases, etc.) and how to cook them into paint.  They had to procure their own minerals to grind, plants to extract dyes from, etc.;  they often mingled with their compatriot shoppers of Apothecaries, the physicians and herbalists.  It was only a century ago that industrial demands for color took over the responsibility for making paints away from the painter:


"Many of the functions of medieval art have been usurped in modern times by the machine.  The two most extensive fields of medieval art production--books and textiles--have been taken over almost entirely nowadays by the forces of mechanical production.  We need not raise the question here of whether there is any loss for us in that..."; Daniel V Thompson (The materials and techniques of medieval painting Dover 1956)

Victoria Finlay literally traveled the world to reveal the origins of pigment production, and she reminds us that there were challenges to storing paints too.  Her book "Colors" directly ties the natural sourcing of pigments and the cultures that are intimately tied to them; "Colors" amplifies the historic cultural, and spiritual, connections between pigments and the artists who harvested them:


"For centuries, artists had stored their paints in pigs' bladders.  It was a pain staking process: they, or their apprentices, would carefully cut the thin skin into squares.   Then they would spoon a nugget of wet paint into each square, and tie up the little parcels at the top with string.  When they wanted to paint, they would pierce the skin with a tack, squeeze the color onto their palette and then mend the puncture.  It was messy, especially when the bladders burst, but it was also wasteful, as the paint would dry out quickly.  Then in 1841 a fashionable American portrait painter call John Goffe Rand devised the first collapsible tube..."(p19 of Victoria Finlay's Color - A Natural History of the Palette 2004 Random House) 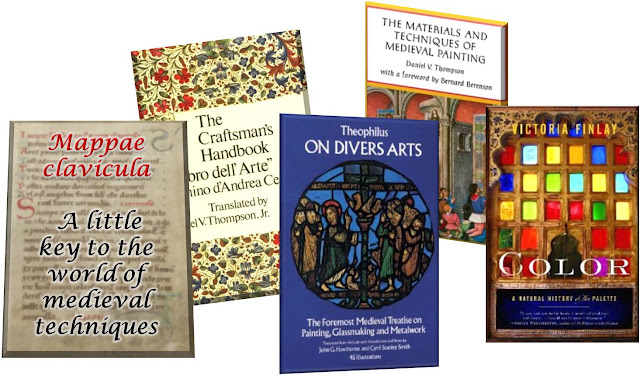 The process of preparing one's own materials was, and still can be, a meaningful part of the creative process.
It was once an expectation that artists were also scientists, sourcing their own materials and working them from the earth, such that their material gathering affected their style. One of the first "technology" books that evolved from compilations of secretive recipes and pseudo-legitimate alchemy was the Mappae clavicula;: A little key to the world of medieval techniques.  It is a compilation of compilations which maintains a sense of poetry and naive embellishment; translated and reprinted by the American Philosophical Society in 1974 in the Transactions of the American Philosophical Society; original illuminations available as a virtual book on the Corning Museum website.

"We forget that throughout the history of medieval art there were no prepared packaged paints, inks, or parchments leaves.  The locating of particular pigments required a familiarity with nature which was so intimate as to be incomprehensible to us today.  It required a knowledge of not only the unchanging elements of nature, but of those that vary with climate, with geography, with the time of year.  The eggs of a specific insect, at a specific time in its life, would yield a particular pigment. At other times, the eggs would be useless. " (p22 of 1974 Mappae Clavicula: A little key to the world of medieval technique)

Magic Paint
Cyril Stanley Smith and John G. Hawthorne put into perspective how the technology of paint making was obscured with early chemistry (alchemy).  Artisans were largely ignorant of their science; and/or they were not rewarded for determining/revealing the truth:


"When there were no purified chemicals in labeled bottles and no general theory to guide him, the artisan would not lightly change his practice.  Moreover, the more spectacular recipes are the least likely to be omitted by a compiler: feeding a virgin goat with ivy and using his mixed blood and urine to carve crystal will impress the layman more than the suggestion simply to dip in turpentine." (p18 of 1974 Mappae Clavicula: A little key to the world of medieval technique)

Note, Smith and Hawthorne, translators of the Mappae Clavicula, also translated Theophilis'12th century On Divers Arts , a treatise on arts written by practicing artist. Pigments, glass blowing, stained glass, gold and silver work.  They highlight that many of the ingredients of these medieval recipes are identified by their geographic origin (location) since natural "chemicals" were not purified then and compositional heterogeneity across regions affected color.


This is reinforced in the 15th century work The Craftsman's Handbook "Il Libro dell'Arte" by Cennino d'Andrea Cennini (translated by D.V.Thompson). Cennini describes how his father introduced him to the sources of various pigments and plants by walking the countryside.  His spiritual experiences with being an artisan radiates throughout his detailed handbook:

"To approach the glory of the profession step by step, let us come to the working up of the colors, informing you which are the choicest colors, and the coarsest, and the most fastidious; which one needs to be worked up or ground but little, which requires another; and just as they differ in their colors, so do they also in the characters of their temperas and their working up."

2) Medieval Technology: Planting dyer's garden now with help from my wife; the goal is to harvest these materials this year/next and then begin experimenting. I will be attending this year's Monticello Natural Dye Workshop to get bootstrapped. Note to self: use glass jars to store the paints, as reinventing "pig bladder tube technology" lowers the return-on-investment. 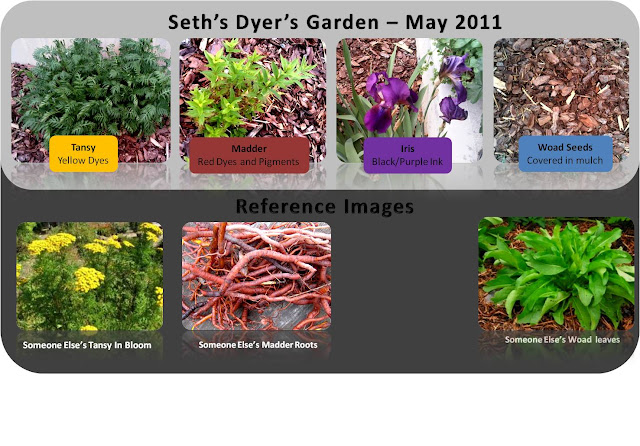